April 22, 2020
9 comments
In advance of a scheduled meeting Thursday afternoon at which county Election Administrator Linda Phillips was expected to reveal her preference for a vendor of new election machines for Shelby County, proponents of hand-marked paper ballots expressed alarm over a potential link between an Election Commission lawyer and one of the vendors bidding on the county contract. The ES&S company, vendor of the controversial Diebold election machines now in use county elections and known to be a bidder for the contract on behalf of a line of devices that mark ballots by mechanical means, is represented by the lobbying firm of MNA Government Relations, which leases space in its Nashville office to the Memphis-Nashville law firm of Harris-Shelton.

Both John Ryder and Pablo Varela, attorneys for the Election Commission, are principals of the law firm, and Ryder’s name appears in tandem with that of MNA on the interactive glass register in the lobby of Nashville’s Bank of America Building. Upstairs on the 10th floor, a metal plaque outside the office door of MNA lists the two companies together, with the company name of MNA followed by a forward slash and then the name of the law firm. [See photos.]

The photographs were supplied by Selena McClure, the daughter of Erika Sugarmon, a Memphis activist, high school government teacher,  and advocate of hand-marked paper ballots.

Asked about the nexus between the two firms, Ryder said that the relationship was solely that of landlord and tenant, with Harris-Shelton leasing the space but having no involvement in the ownership of MNA and possessing no partnership with the lobbying firm. He acknowledged being a longtime friend of Wendell Moore, the senior official at MNA but said he had had no knowledge about MNA’s client base and, in particular, did not know whether that company had a client bidding for the Shelby County voting-machine contract.

did he have any awareness of who the respondents were to the RFP [request-for-proposal] sent out by Phillips seeking bids on the contract.

Ryder could offer no explanation for the linking of his name — (twice; once in an apparent list of MNA employees) —— with that of the lobbying firm on the lobby register. “That’s just a mistake,” he said. He repeated that there was no working relationship between MNA and Harris-Shelton and therefore no reason for him to have made a public disclosure.

Besides being an attorney for the SCEC, Ryder has long been an eminence in the fields of law, where he specializes in bankruptcy and has won several awards for his expertise, and politics, He served in the recent past as general counsel of the Republican Party, nationwide, and was his party’s principal adviser on reapportionment matters in the wake of of the post-2010 census. He currently serves on the board of the Tennessee Valley Authority, having been appointed by President Trump. 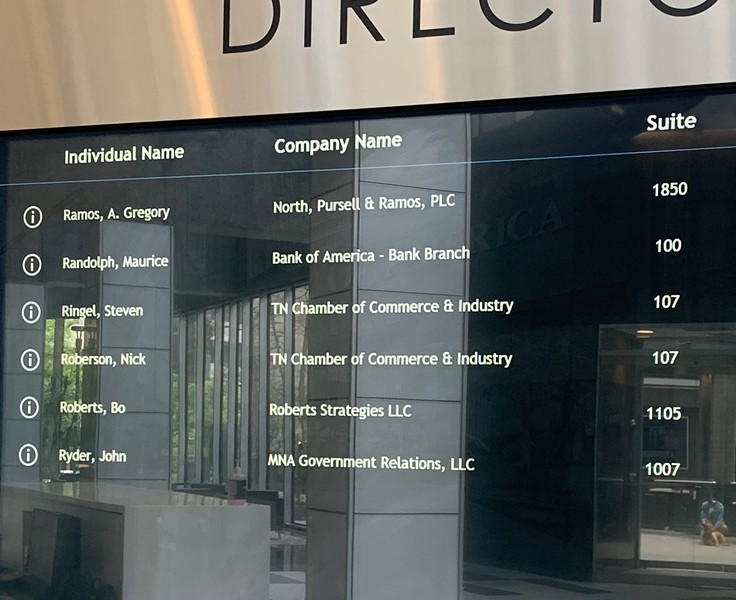 As indicated, however, advocates of voter-marked ballots are not so sanguine about the apparent relationship between Ryder’s law firm and MNA, however coincidental or incidental it might be. “All the companies bidding on the machines are entitled to be on equal footing, and the public needs to be assured that it’s getting a fair deal,” said Carol Chumney, a lawyer and former public official who favors voter-marked ballots.

Chumney said she had respect for Ryder but felt strongly that he should have made some sort of disclosure about the relationship between his law firm and MNA.