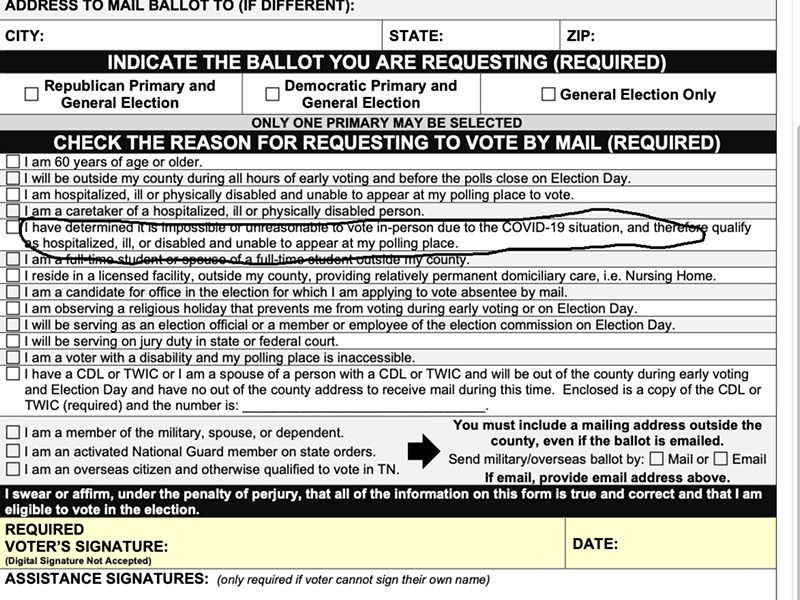 Admonishing representatives of state government that they would be risking criminal penalties, including possible incarceration, if they did not comply, Davidson County Chancellor Ellen Hobbs Lyle gave the state a deadline of tomorrow, Friday, June 12th, to carry out her order of last Friday, June 5th, to expedite arrangements for mail-in voting for all eligible voters who seek it during the ongoing COVID-19 pandemic.

Judge Lyle’s new ruling came on a motion from plaintiffs’ attorneys to ensure enforcement of last week’s order. One set of the attorneys represented a group of Memphians, including several associated with the organization Up the Vote 901, another set was on hand from the American Civil Liberties Union.

As argued primarily by University of Memphis law professor Steve Mulroy, the plaintiffs accused the secretary of state’s office and the state elections coordinator of several acts of obstructionism in an effort to avoid compliance with Lyle’s order. Those acts included turning away applicants for mail-in ballots, allowing local officials to threaten them with fraud, and printing a version of absentee ballots that suggested mail-in voting was available only to persons certifiably ill or hospitalized.

Speaking from the bench, Judge Lyle found that the state “took steps in direct contradiction” with her previous order and said, “Shame on you,” and “I’m calling the state out.” She noted that the state had not availed itself of alternatives to willful violation and had not, for example, filed a motion to modify her order, or proposed a conference to discuss it. She had previously denied the state’s petition for a stay of the order but allowed a right to appeal.

She said she would formalize her new order in written form later Thursday and said her instructions would include that the state print a new absentee form without misleading language, and do so by noon Friday, and that state officials begin to promptly process all absentee requests and, by 5 p.m. on Friday, inform all local county officials of the totality of her explicit conditions.

In suggesting that further non-compliance could be regarded as criminal behavior and dealt with accordingly, Lyle declined a request from plaintiffs that the state officials be fined, noting that the state was experiencing financial difficulties as a result of the same pandemic that was moving voters to seek the right to vote absentee.