On Wednesday, U.S. Attorney General William Barr, who normally makes news pushing legal agendas backed by President Donald Trump, came to Memphis and, in the presence of local law-enforcement officials, touted Operation LeGend, a joint federal-local operation in which Memphis is one of several high-crime cities targeted by the U.S. Department of Justice (DOJ).

Speaking at the Memphis Police Department's Ridgeway Station, Barr began with a tribute to the law-enforcement profession in general.

“Today, it's probably ten times harder than it's ever been.” he said. “Part of that climate is characterized by media coverage that often distorts the world and somehow has taken some very unfortunate incidents and and used them to create a false narrative in which you were the bad guys.”

Barr said that, despite a general impression that law enforcement was “on a treadmill,” discernible progress had been made.

"Thousands and thousands of lives” had been saved by carefully applied law enforcement, Barr said.

“A lot of that progress was getting back to basics and going after violent offenders who were responsible for a disproportionate number of crimes," he said. “We can acknowledge that we're not the only solution, but I think people have to recognize there can't be the solution without us.”

The Attorney General then gave a rundown on the effects of Operation LeGend, in which the Justice Department decided to intervene with agents and other forms of support.

“That's why we came to Memphis, we put in 96 additional federal agents, $9.5 million, approximately, to support 50 additional police positions, additional monies for technology upgrades and brought in additional forensic specialists and investigators to work on crimes.” 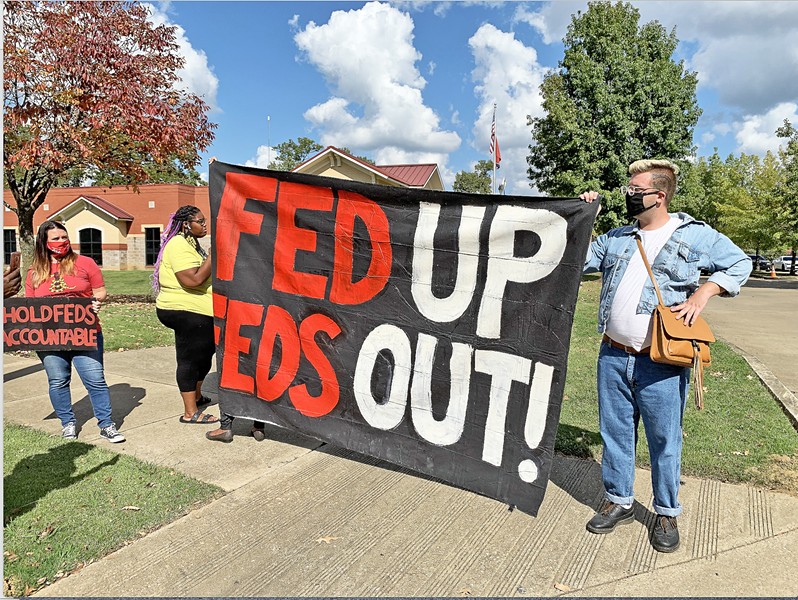 “In just several months, in just a couple of months, we've had over 5500 arrests nationwide. And 1100 of those were charged federally. Here in Memphis, we've had 64 suspects charged. I know, in Memphis, some of the crime has proven to be particularly stubborn. The homicide rate is still very high.”

But he said, there had been significant abatement in other areas like robbery and rape.

“And leads developed for over 1500 gun crimes.”

Not looking forward to that prospect at all was Hunter Demster, one of several local activists protesting the occasion, who said of their demonstration, “Decarcerate Memphis is hosting this event in response to William Barr coming in town and pushing the harmful Trump policies and using Memphis as a testing ground for these federal agencies.”

Demster said his group had “major concerns” about Operation Relentless Pursuit and LeGend.

“We have major concerns around these task forces in general and with their accountability and purpose — Memphis being as poor as it is and people being food-insecure, job-insecure, health-insecure. Memphis needs help and it's not more police. So we want them to redistribute the money they're using for these federal operations into social services that actually prevent crime and address people's basic needs.”

Demster was critical also of Mayor Jim Strickland for cooperating with Operation LeGend and, he said, with the objectives of the Trump administration.

The remarks by Demster, who was later taken into custody by police, paralleled those made in a recent article in MLK50 by University of Memphis professor Tony Velasco, who also saw a synchronicity of sorts in the policies of the Memphis Mayor and the President.