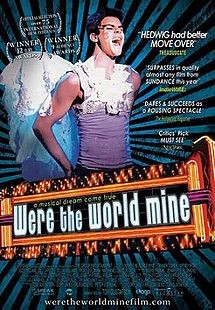 The annual weekly Outflix Summer Film series, a fund-raiser for the larger Outflix Film Festival in the fall, starts on Thursday, June 7th with a screening of Were the World Mine at 7 p.m. at Studio on the Square.

Were the World Mine, a film about gay empowerment, is a romantic musical inspired by Shakespeare’s A Midsummer Night’s Dream.

Other films in this year's series include A Marine Story on June 14th, Guys and Balls on June 21st, and The Mostly Unfabulous Social Life of Ethan Green on June 28th.

Tickets to each show are $10. For more information on Outflix, go here.