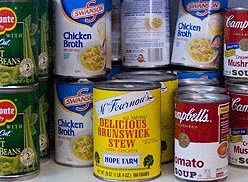 In response to a full-page, anti-gay ad that ran in The Commercial Appeal last week, a group of LGBT advocacy organizations have begun a food drive for the Mid-South Food Bank.

The anonymous organization behind the ad, known only as Memphis Churches of Christ, reportedly paid around $15,000 for the spot. Rather than raise money to buy a pro-equality, counter-ad, a handful of LGBT groups are asking supporters to make a donation to the food bank.

"The content of the ads is deeply offensive, but I remain a firm believer in the First Amendment right to free speech. While this group is entitled to say what they want, most people reject the divisiveness of the ad's message because they support inclusion, fairness, decency, equality and diversity in Memphis," said Jonathan Cole of the Tennessee Equality Project. "It's hard to watch churches and other religious organizations spending tithes and church offerings on hateful advertising rather than benefit their church members or assist those living in poverty in our city."

"Our organizations have criticized churches who spend money to demean us by suggesting that they focus on caring for the poor and feeding the hungry," said Will Batts, executive director of the Memphis Gay and Lesbian Community Center. "In response to recent attacks on our community, we're putting our money where our mouths are and the mouths of those who go hungry. We shall meet hatred with love for our friends and neighbors."

They are calling on people to make donations of food or money by November 9th. Donations may be made online. Food may be dropped off at the Mid-South Food Bank at 239 S. Dudley between the hours of 8 a.m. and 5 p.m. Monday through Thursday or 8 a.m. to noon on Friday.