The planned Westboro Baptist Church protest at Graceland started right on time but not in the location counter-protesters anticipated.

At 4:30 p.m., counter-protesters — decked out in rainbow attire and/or Elvis costumes and sideburns — were already huddled behind a police barricade outside Graceland's iconic signature wall. But Westboro's "God Hates Fags" signs were nowhere to be seen.

Rumors began swirling that Westboro had set up across the street and a block away from Graceland, and against police wishes, the counter-protesters began slowly making their way down the street, a few at a time.

Sure enough, 10 or so Westboro members, most of them small children and teens, were holding their signature anti-gay signs at the corner of Elvis Presley and Lonely Street. But they weren't lonely for long, as the LGBT-supportive crowd and a gaggle of curious tourists made their way to Westboro's corner.

Although the Westboro Baptist Church's website said they'd be protesting Elvis as a false idol and drug addict, they weren't bearing any Elvis-related signs. Instead, the signs focused on gays, gay marriage, Obama, and new enemy — the NBA. Signs reading "Fag NBA" with pictures of rainbow basketballs were likely due to NBA star Jason Collins recently coming out as the first openly gay player in the NBA.

The Westboro members brought a stereo along with them, and they were playing Maroon 5 and Garth Brooks songs but changing the words like this catchy chorus from Maroon 5's "This Love": "This lust has taken control of you. We said, okay, god has become your foe." 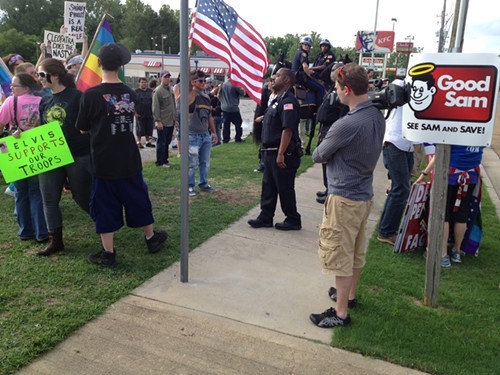 Westboro packed up to leave at 5:40, a few minutes after the protest was supposed to have ended.