Key West, Florida's annual Fantasy Fest celebration has been described as that area's version of Mardi Gras. Semi-nude or crazily costumed revelers party in the streets for about 10 or so days toward the end of each October. The event isn't strictly for the LGBT community, but since part of Duval Street in Key West is home to gay bars, there's a large LGBT presence at Fantasy Fest.

Memphis photographer Saj Crone documented last month's fest, and her images will be showcased on Friday, November 15th from 6 to 9 p.m. at Gasoline Gallery at 2493 Broad Avenue in the 15th installment of curator/artist Jason Miller's "Circuitous Succession: An Exhibition Series." Crone's show is called "Fantasy Fest—Key West: New Vernacular Images." The images will remain on view until November 19th.

"Fantasy Fest is an annual week-long celebration in Key West, Florida in it’s 32nd year. It culminates in a parade at the end of the week, when Duval Street is filled with people in various costumes and states of undress. It is a street party filled with the fantasies of free spirits.

October 26th, 2013, my cousin and I drove to Key West from his home in West Palm Beach. We were visiting a friend, and our visit began in the middle of the parade day. We walked up and down Duval Street. I was amazed and kept shooting my camera. That evening we watched the two hour parade, which demanded more photographs.

This exhibit is a result of that day. Jason Miller, curator of the show, insisted that I show these images because they are so different from what I usually shoot- swamps and river floods. I’m glad to be showing this work- with thanks to Jason and his inspired efforts in putting this show together. 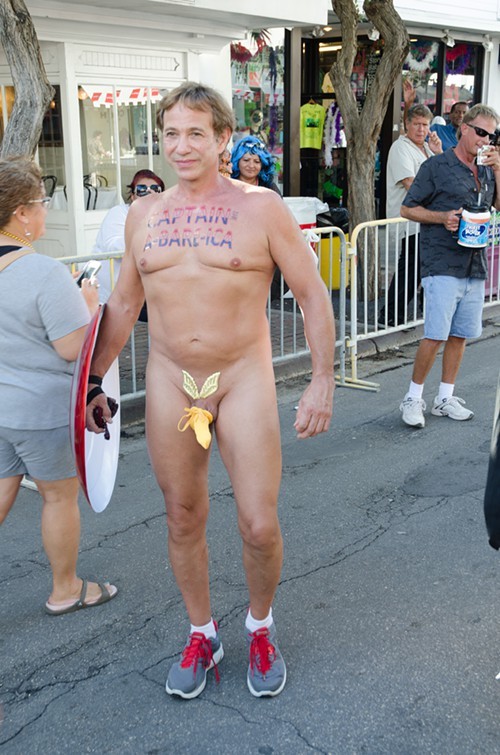