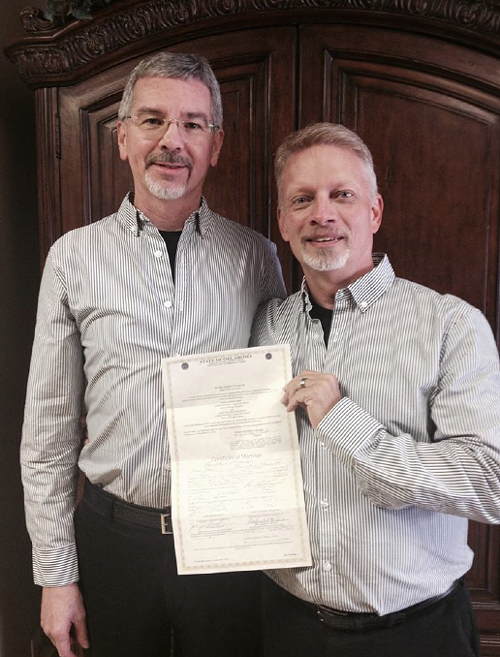 John Smid, the former director of Memphis-based ex-gay ministry Love In Action, has announced his marriage to partner Larry McQueen. The two married in Oklahoma on Sunday, November 16th.

Smid has been living as an out gay man for several years now, and he's been in a relationship with McQueen for one year. Gay marriage just became legal in Oklahoma last month. The couple live in Paris, Texas, where Smid moved from his Memphis home in the summer of 2013.

Smid's journey from ex-gay leader to happily out gay man has been a long one. He was promoted to the role of executive director of Love in Action in September 1990, and in 1994, the organization moved its ministry to Memphis. Love in Action operated here quietly until 2005, when protests over a youth "straight" camp called Refuge sparked a national media firestorm.

In early June 2005, Zach Stark, a White Station High School student, posted these words on his MySpace page: "Today, my mother, father, and I had a very long 'talk' in my room, where they let me know I am to apply for a fundamentalist Christian program for gays."

That fundamentalist program, described by Stark in a later post as a "boot camp," was Refuge, a two-week day camp where gay kids were taught how to become straight kids. After Stark's MySpace post, local LGBT equality advocates held a week of protests outside Love In Action, and the Memphis ministry made national headlines, including a story in The New York Times.

Love In Action eventually discontinued the Refuge program and moved to an adults-only conversion therapy model. All the while, Smid was struggling with his own beliefs. During the week of protests in 2005, Smid met Memphis filmmaker Morgan Jon Fox, who was working on a documentary about Love In Action. Smid told the Flyer in a previous interview that it was Fox's influence that helped open his eyes to the fact that conversion therapy was doing more harm than good.

"As we got together, we were willing to lay aside our agenda and get to know one another as people," Smid said of Fox. "That was very instrumental in my processing where I am today."

Smid eventually resigned as director of Love In Action in 2008, and he founded Grace Rivers, a monthly fellowship for gay Christians. At the time, he remained married to his wife. But they eventually divorced in 2011. Earlier this year, Smid told The Lone Star Q, a Texas LGBT news organization, that he couldn't continue living the rest of his life in a marriage that didn't feel right.

"I’ve believed in faith that something was going to happen, and it never did, and so at my age, right now in my life, I don’t have that many good years left in me, and I can’t live like this for the rest of my life, so I said no I’m not willing to keep pushing after something that’s not going to happen," Smid told The Lone Star Q, regarding his divorce.

Smid met McQueen three years ago, but they were just "acquaintances with common friends," wrote Smid in his Facebook announcement of their marriage Sunday.

"I gradually got to know him over time until we reached a place in our lives that we saw we wanted to get to know one another through a dating relationship. As we dated we shared our vision for life, our personal philosophies, and our faith values. We found a compatibility that was comfortable and exciting," Smid said.

He went on to say, "I realized this week that my relationship with Larry is a mirror I see in every day. For most of my life, the mirror I saw reflected my mistakes, shortcomings, and failures. The reflection I see today with Larry shows me the positive things in my life, my strengths, gifts, and talents. I see how I can succeed at a mutual intimate and loving relationship. For this, I am truly grateful."