The Memphis couple and their attorney involved in the same-sex marriage case that will be heard by the U.S. Supreme Court were honored in a ceremony hosted by Freedom to Marry on Tuesday afternoon at the Memphis Gay & Lesbian Community Center. 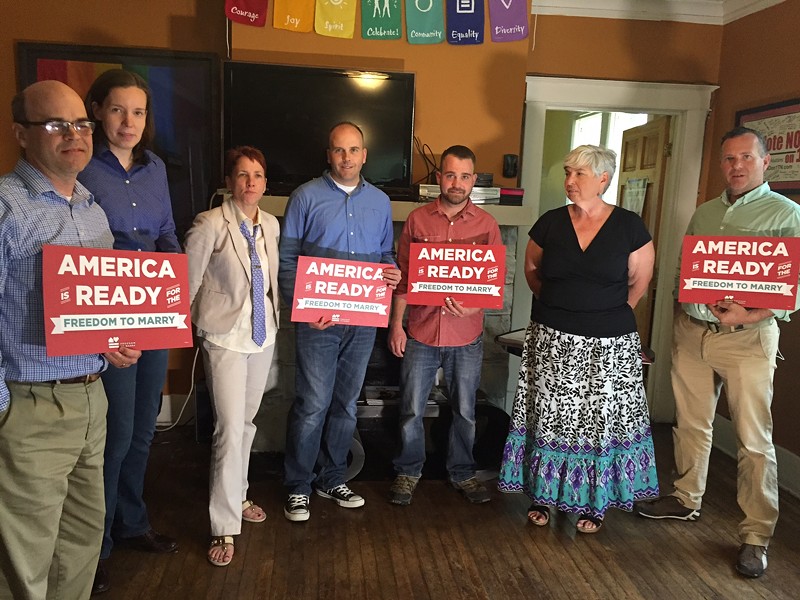 Ijpe DeKoe and Thom Kostura, plantiffs in the Tennessee same-sex marriage case, and attorney Maureen Holland are flying to Washington D.C. this week. The high court will hear oral arguments in the case on April 28th. The Tennessee case is lumped with same-sex marriage cases from Ohio, Kentucky, and Michigan, all of which are on appeal after the Sixth Circuit Court of Appeals upheld marriage bans in the four states last year.

The Sixth Circuit's decision was a split from other appellate courts, the rest of which have ruled to overturn marriage bans. Marriage equality advocates believe the Supreme Court's decision in this case will decide the fate of marriage in the country.

"We come together today as hopeful that soon the harmful marriage ban and all of the marriage bans across the country are struck down, and the days of married couples being treated like strangers will be relegated to the history books," said Amanda Snipes, campaign manager for Southerners for Freedom to Marry, which hosted the ceremony Tuesday afternoon.

Holland said there are 48 lawyers working on this case, and she expects the Supreme Court to issue a decision by the end of June.


"My greatest wish for you is that by June, you are as married in this building as you are on the base," said Tennessee Equality Project's Anne Brownlee Gullick, addressing DeKoe and Kostura. DeKoe is on active duty in the Army Reserves, and since the federal government recognizes same-sex marriages, the couple is considered to be married when they visit a military base. DeKoe and Kostura married in New York in 2011.


DeKoe said they realize that they're at the center of what could be a ground-breaking case that has potential to end marriage discrimination across the country once and for all.


"We're at the center of this giant hurricane," DeKoe said. "We realize how big it is. It's going to be a crazy day in Tennessee and across the country when this decision comes down in our favor. And I'm excited for it."

Although the high court is expected to rule in favor of marriage equality, Holland said that, in the case that it does not, there is a back-up plan.

"The lawyers don't stop. We'll continue to bring cases," Holland said. "We'll continue our fight, but we're hopeful that we will join the 36 other states that recognize same-sex marriage, so Thomas and Ijpe won't have to continue to engage in 'Are we married? Are we not?' when they cross a state boundary."