"It's my pleasure to introduce you to Mrs. and Mrs. Wallheimer," said attorney (and former Shelby County Commissioner) Steve Mulroy, as a couple hundred people gathered on the lawn of the Memphis Gay & Lesbian Community Center (MGLCC) Friday afternoon cheered and clapped. Mulroy was referring to Jennifer and Alisha Wallheimer (formerly Jennifer Ballheimer and Alisha Wall), who married today on the front porch of the MGLCC.

Mulroy was one of several volunteers with marriage-ordaining powers at the MGLCC's celebration of the U.S. Supreme Court's 5-4 decision in favor of same-sex marriage in all 50 states. He and others married two other couples on-site in front of the gathered crowd. Before the ceremony, ministers roamed the crowd looking for anyone ready to marry.

"We actually had more ministers come out to perform weddings than we had people looking to get married," said Tennessee Equality Project (TEP) Shelby County Committee Chair Justin Smith.

Shelby County Commissioner Reginald Milton spoke at the event. He told a story about having to go to a segregated medical clinic when he was a kid followed by the words "An injustice to anyone is an injustice to all."

"I was too young to know the Civil Rights Movement, but I am honored to be here today as we stand for justice for every human being in this country," Milton said.

While the event was celebratory, TEP President and Chair Ginger Leonard cautioned that, once the celebrations were over, the community still had lots of work ahead.

"Just because we can get married doesn't mean we are no longer going to be discriminated against in housing, jobs, getting loans from banks, or in other areas," Leonard said. 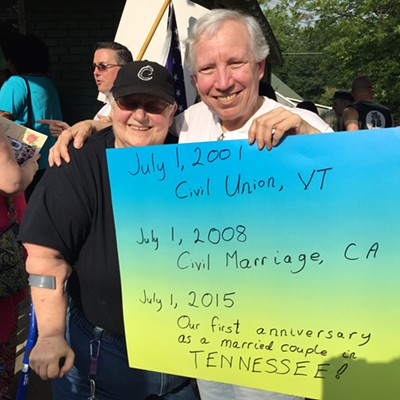