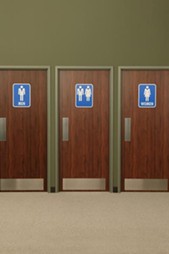 The Tennessee bill that would have prevented transgender students in public high schools and universities from using the restroom that corresponds with their gender identity is dead again.

House sponsor, Rep. Susan Lynn (R-Mt. Juliet) announced on Monday that she would roll the bill over to next year.

It's the second time in less than a month that the bill has been killed. In late March, the bill was sent to summer study, but proponents managed to get it back up for consideration and a House committee voted 8-4 to reverse the decision to send the bill to summer study.

Tennessee Governor Bill Haslam has expressed concerns about the bill, citing that the state may lose federal education funding if it goes into law. And an opinion by State Attorney General Herbert Slatery issued last week backed up Haslam's concerns that the state could lose millions in federal funding if the bill was passed. Across the country, as states have considered such bills, major companies, such as Coca-Cola, the NFL, and Delta Air Lines, have raised concerns about discrimination. In Tennessee, CMT (Country Music Television) has issued a statement against the bill.