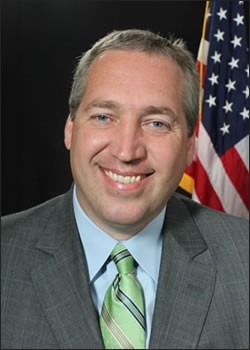 Lambda Legal, Tennessee Equality Project, and the Domestic Violence and Sexual Assault Center of Rutherford County filed a formal complaint last week against Coffee County District Attorney General Craig Northcott. The complaint was lodged with the Tennessee Board of Professional Responsibility, which oversees attorneys in the state.

The groups claimed that Northcott made public statements that he does not file domestic assault charges if the violence occurred between same-sex spouses, does not recognize “homosexual marriage,” and would not prosecute those county clerks.

“Coffee County DA Craig Northcott has denied the validity of same-sex marriages and the equal protection of the law to LGBT people,” said Ethan Rice, senior attorney for the Fair Courts Project at Lambda Legal. “Such conduct violates ethics rules protecting citizens from bias and has no place within the very office designated to enforce the law of the land.

“Keeping DA Northcott in office will have a chilling effect on the willingness of LGBT people to seek justice and protection. District Attorney Northcott’s public comments revealed not only a bias against LGBT people but that he has made discriminatory charging decisions against an entire class of people and intends to continue to do so.”

Keeping DA Northcott in office will have a chilling effect on the willingness of LGBT people to seek justice and protection. click to tweet
Last year, the Tennessee Bureau of Investigations (TBI) reported 1,424 cases of domestic violence in same-sex relationships, according to the groups. The TBI’s 2018 Tennessee Hate Crime Report said 21.9 percent of all hate crimes last year were motivated by sexual bias, which includes crimes against LGBT and gender non-conforming people. Tennessee is home to about 130,000 LGBT adults, according to a report from the Williams Institute, and nearly 25 percent of those are people of color.

The groups said Northcott’s comments may deter LGBT people from reporting domestic assault, hate crimes, or other violence against them and create an obstacle to accessing the criminal legal system.

“Discrimination in prosecution endangers our community and erodes the public trust in the criminal justice system.

Northcott’s statements were made during March 2018 in a presentation he gave called “The Local Church’s Role in Government” at New Mexico’s Chafer Theological Seminary Bible Conference.

Simple assault is a lesser charge with reduced punishment implications. The groups argued that Northcott is stripping LGBT domestic assault victims of the protections given with the elevated charge of domestic assault.

Discrimination in prosecution endangers our community and erodes the public trust in the criminal justice system. click to tweet
Northcott said domestic violence charges are to recognize and protect the “sanctity of marriage” but “there’s no marriage to protect” when it comes to same-sex marriages.

“We understand ‘domestic’ is not confined to marital status and feel it is important to advocate for all victims of domestic violence, sexual assault, or stalking regardless of race, color, national origin, religion (including religious belief), sex, gender identity (including gender expression and gender identity), sexual orientation, disability, age, marital status, family or parental status, or socioeconomic status,” said Karen Lampert, executive director of the Tennessee-based Domestic Violence Program & Sexual Assault Services. “Denying, limiting, or disbelieving a victim of domestic violence, sexual assault, or stalking further empowers an abuser, increases danger of lethality, and perpetuates a societal crime that can be prevented”

“There’s no marriage to protect” when it comes to same-sex marriages, Northcott says. click to tweet
Northcott also said county clerks should not “succumb” to the rule of law” when it comes to issuing same-sex marriage licenses. Instead, they should “stand on God’s truth” and he would not prosecute them for it. Further, he said he would pat the clerk on the back and give them hugs.

Late last month, a group of about 300 Tennessee lawyers wrote the board asking for an investigation of Northcott on his statements. The Council on American-Islamic Relations filed another charge abasing Northcott after he said Muslims were inherently evil.