Report: South Has Most LGBTQ Residents In the U.S.

The South is really gay, y’all.

A new report from two gay rights groups says that one in three LGBTQ people in the country call the South their home, more than any other region in the country.

The report says LGBTQ people live in the South despite its “hostile policy landscape.” Of those LGBTQ Southerners, 93 percent live in states with laws that negatively impact “virtually every aspect of daily life” for them. For all of this, the group called its report, “Telling a New Southern Story: LGBTQ Resilience, Resistance, and Leadership.”

“Contrary to media depictions of LGBTQ people primarily living in New York or California, the South is home to more LGBTQ people than any other region, as well as incredible racial diversity among LGBTQ people,” said Logan Casey, policy researcher at the Movement Advancement Project (MAP) and author of the report. “LGBTQ advocates in the South are both creative and effective in response to the political landscape and have often led the nation in working in broad coalitions and across a wide range of issues.”

Here are some other key findings from the report:

• According to a survey from the CSE, 71 percent of LGBTQ Southerners have experienced harassment related to their sexual orientation or gender identity.

• 23 percent of LGBTQ Southerners have experienced physical violence, with higher rates for people who are transgender. 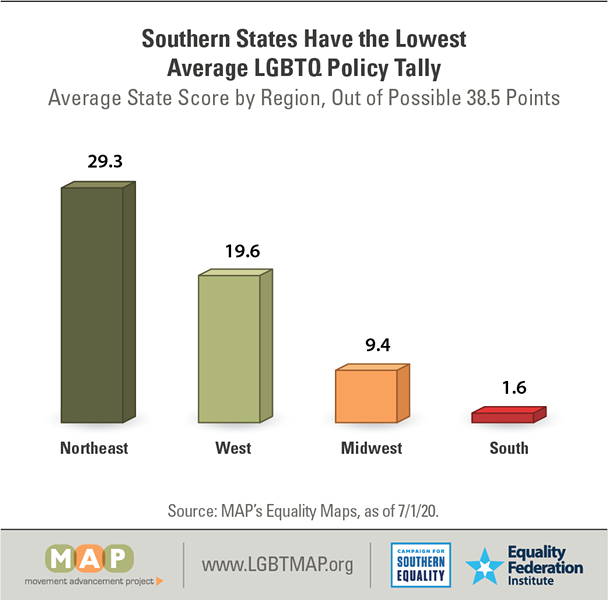 • One in three Black LGBTQ Southerners reported experiencing physical violence because they are LGBTQ, the highest rate of any racial or ethnic group.

Progress has been made across the South in the last 10 years, according to the report, despite harsh state policies. LGBTQ people are innovative, focusing on building community and providing direct support to address community needs without waiting for state legislatures, the report says.

“It’s true that LGBTQ Southerners experience a lot of barriers to equality and full inclusion, from a difficult policy landscape to the cultural realities of the South,” said Rev. Jasmine Beach-Ferrara, executive director of the CSE. “These forces often require that we organize in different ways, dreaming up new strategies, finding ways to work the seams and the fault lines — in other words, that we approach organizing in ways that are both queer and Southern.

“There’s a deep sense of resolve and hopefulness, even as we also carry significant pain and grief. The impact of LGBTQ people staying in the South, being out, sharing our stories, being in public leadership – all of this is changing old notions of what’s possible in the South. This is our home, and to claim it as such is an act of both resistance and reclamation.”