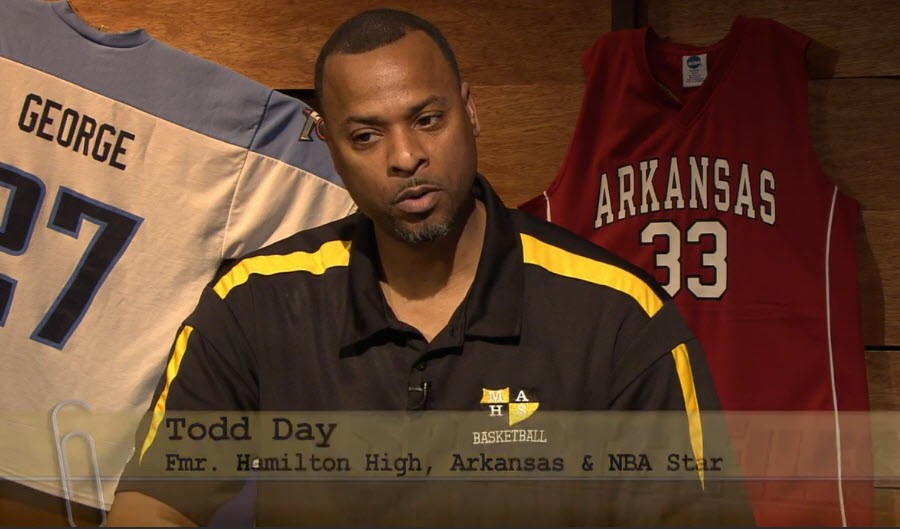 The question seemed easy enough, but Todd Day, Hamilton High School’s new boys varsity basketball coach, struggled to come up with an answer. Naming his favorite spot on the basketball court during his playing days was difficult only because the game was so simple for Day when he prepped at Hamilton in the late '80s. His shooting range was infinite. When he left Hamilton and, later, the University of Arkansas, it was as those schools' all-time leading scorer. “I guess if I had to answer,” Day finally says, “it would be anywhere on the court, but definitely somewhere behind the three-point line.”

If only coaching was as easy and smooth as Day's jump shot. Coaching teenage boys is different. Patience is required. Lots of patience. Day learned this lesson during his five years at Memphis Academy of Health & Sciences (MAHS), where he began his high school coaching career. “It really helped me to become more patient,” Day says. “When I first started coaching, I wanted players to be as good as I was, and do the things I could do in high school. But it takes gym time. And that’s something these kids don’t get these days — a lot of gym time.”

Over the summer, Day’s patience was rewarded when Keelon Lawson decided to step down as Hamilton’s coach to join the college ranks at the University of Memphis. Finding his replacement was a no-brainer for Wildcats’ Athletics Director Jerome Griffin. All he had to do was look up to the school gym rafters, where Day’s number 10 jersey hangs. “Todd is Hamilton,” said Griffin. “He’s true and blue. Not only that, he was qualified for the position. He gives credibility to the program. The community and parents and kids can see that a kid from Hamilton can go on and have a successful college career and play professionally,” referring to Day’s four years at Arkansas and nine years in the NBA.

Former long-time Hamilton coach Ted Anderson agrees Day was the right choice to replace Lawson. Anderson, Day’s step-father and former high school coach, admits he may be bit biased, but says coaching basketball on the high school level is more than x’s and o’s, and Day understands that. “I didn’t have to talk to Todd about basketball or give him advice on that community. He’s going home. He knows the history. He grew up over there. His biggest challenge is going to be living up to expectations.”

Day was excited for the opportunity to return to Hamilton, but admits he wasn’t exactly sure what to expect. He didn’t know how he would feel about having to carry a walkie-talkie around and making sure kids were getting to class on time. “I didn’t know how I would feel until I started walking these halls again,” he says. “It brings back a lot of memories. Just the opportunity to give back to some of the kids the things that were given to me coming here. Giving them an opportunity to further their careers is what drives me at this point.”

That and winning. And he has the roster to do a lot of it in his first year. Lawson may have left Hamilton, but he also left the program with his talented sons, Keelon, Jr. and Dedric, both consensus top 100 players. “What a gift,” Day says. “Dedric and K.J. are great players with great attitudes, plus they already kind of know my system. So it should be a good transition.”

It was nearly a moot point. Dedric and K.J. were once headed to Florida to play at Arlington Country Day. But their plans changed when their father accepted a job as an assistant on coach Josh Pastner’s staff. The Lawson boys remained in Memphis and during the summer played AAU ball with Team Penny, where Day served as an assistant coach under Penny Hardaway. “It was great coaching that kind of talent,” Day reflects. “It’s a coach’s dream. We were loaded at each position. Even the bench players were great.”

And with great players come great expectations, and a great dilemma right out of the gate. “Really I’m in a no-win situation,” Day laments. “If I win, I’m supposed to win. If I don’t, it’s like 'how could you lose with two of the best players in the state.'”

Despite the jump in talent from MAHS to Hamilton, Day insists his coaching philosophies and style will remain the same. When asked about the goal for his team this season, there is no struggling to find the answer: “Win a state title,” he says, without hesitation. “That’s always the goal.”