Mario Reed: Fighting to Get Back Up

May 04, 2016
3 comments
Mario Reed is on the rise, both literally and figuratively. Reed gained attention in Shelby County back on September 12, 1997. He was a Millington Central High School football player, making what he thought was a routine tackle on a kickoff return. After the collision, he heard his teammates and his coaches shout to him to get up. But he couldn’t. “I couldn’t move,” he remembers. “I could only feel the wind in my face.”

Reed was told he would never have movement from his neck down. “I was going to be like Christopher Reeve,” he says, referring to the late actor who played Superman and later became a quadriplegic after a horse riding accident. 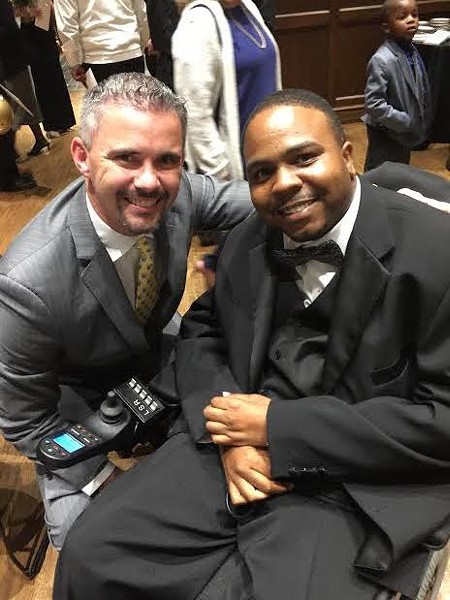 “I’m a fighter,” Reed says. “You tell me I can’t do it and I want to prove I can do it.” More than 13 surgeries later, with a total commitment from Reed and his family, he continues to prove his initial diagnosis wrong. After nerve transfer surgery, Reed now has feeling and movement in both of his arms. He says he’s not done. He has several goals in life. His ultimate goal is to do what he hasn’t done since the football accident: “Goal number one is to walk,” he says. “If I can take a step on my own, then my dream will be fulfilled.” He hopes to have the nerve transfer surgery in his legs. He knows success is not a given.

For now, Reed is at least once again upright, thanks to the standing-power wheelchair he received April 11, the day before his 34th birthday. “It allows me to stand. I can lay back and stretch my legs out. It has 30 motions.” The best feature is not is included in the manual: “I can talk to people eye-to-eye,” he says. “It makes me feel like I’m standing on my own two feet.”

Because of his new device, Reed was excited to attend the Memphis Chapter National Football Foundation and College Hall of Fame Scholar Athlete Dinner, where he was one of the guest speakers. But the weekend before the dinner, he broke his ankle transferring from his chair to his lift. {image-2]

Still, he showed up at the dinner to give out the award named in his honor: The Mario Reed Courage Award is given annually to the athlete or sports figure who has demonstrated the fortitude to overcome adversity. “It’s an honor to have an award named after me,” he says. “I have an award to present someone. It shows that life can throw you a curve ball, but never give up.”

Harold Graeter, a board member with the foundation agrees. “He’s a special guy,” says Graeter. “He goes through years of therapy. He goes back to Millington Central and graduates. He spends times volunteering. He is the perfect example of what courage is.”

Shon Coleman, a former St. Jude Children’s Research Hospital and Auburn football star who was drafted in April by the Cleveland Browns, is this year’s courage award winner.

Some of Reed’s other goals include directing a youth center and raising paralysis awareness. He’s working to do the former by volunteering at the Boys & Girls Club of Greater Memphis. He hopes to achieve the latter through his non-profit, the Mario Reed Foundation. He is also producing a documentary about his life.