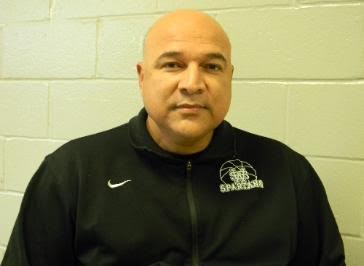 May 9 was a big day for White Station forward Justin Shaw. He signed a letter-of-intent to play basketball at Kaskaskia College, a community college in Centralia, Illinois. It’s not the big-name school that some of the more celebrated Spartans in the past have gone on to attend, but for White Station boys’ basketball coach Jesus Patino, it’s very significant.

That's because it means Patino (and White Station) it continues an 11-year streak that a Spartans player has received a college basketball scholarship.

“Eleven years,” Patino says, which is also the number of years he's held the job at WSHS. “And every year we’ve put at least one player in college.” Patino says an average of three Spartans players per year have signed to play on the college level during his tenure.

He remembers his first Spartan to sign. During the 2005-06 season, 6’-5” center, Chris Williams, like Shaw, signed with a junior college. He eventually transferred to Arkansas State.

Former Memphis Tigers guard, Joe Jackson, who graduated from White Station in 2010, is perhaps the most notable and accomplished Spartan Patino has coached. Jackson is currently playing professional basketbal in Korea. “He’s the king of Korean basketball,” says Patino.

Ferrakohn Hall, who graduated in 2009 and attended Seton Hall and Memphis, plays professional ball in Arabia. Andre Hollins, the prize of the 2011 class, graduated from the University of Minnesota and now plays in Germany.

Patino is just as proud of some of the less-heralded players who have come through the program under his watch. James White, who along with Jackson, Hall, and Hollins, helped the Spartans win a state title, is the Tennessee State men’s basketball team video coordinator.

Patino says his most talent rich-class graduated in 2014. “We had eight guys from that class receive scholarships,” he says. The seniors included Leron Black (Illinois), Chris Chiozza (Florida) and Davell Roby (St. Louis).

Since their departures, Patino has been in a rebuilding mode. “We lost nine seniors that year,” he says. “But rebuilding is fun.” Still, it doesn’t come without challenges. “I don’t recruit,” Patino says of the practice that has become common in the high school ranks.

Plus, the school’s standing as the premier basketball program in the Memphis area has taken a hit over the past two years, giving way to teams like East and Hamilton. Patino is not fazed. “We do things the right way,” he says. “We will continue to do so. It’s more than basketball. It’s about helping make kids great human beings. It’s a combination of everything. Our staff teaches discipline, leadership, respect, and ownership.”

Shaw agrees. He also believes it’s a team approach between coaching staff and student athlete. “My coaches were great,” he says. “I had to be able to take coaching. If I didn’t have the discipline to do it, I wouldn’t have taken it.”

On occasion, Patino has been asked if it is time for him to move on. “I tell all of my players, when they graduate, I’m leaving,” he jokes. “We’ve won state titles and several tournaments nationwide. We’ve done everything. I’ve had opportunities to leave. But I’m home.”