Saturday at Bonnaroo was hot. Like sticky, muggy hot. It was so hot and the daytime line-up was so weak that the idea of venturing out of our shaded campsite to hear bands seemed like a daunting task. But I decided to brave the heat for Hozier. I missed the Irish indie-soul singer at Memphis in May (MIM) because I didn’t know who he was. But when I learned post-MIM that Hozier was the guy who sings the haunting hit “Take Me to Church,” a statement song on Hozier’s frustration with the Catholic church’s stance on homosexuality, I was pretty sad that I missed him. So I was glad to have a second chance at Bonnaroo. Sadly, I only caught the first bit of his set — and missed “Take Me to Church” — but I liked what I heard.

Because I was shooting photos for the Flyer, my work took me away from Hozier’s set to shoot Americana indie rockers The War on Drugs since they were playing at the same time. I’d never actually listened to The War on Drugs before Bonnaroo, and I’m not sure what I expected but what I saw was not it. Our music editor Chris Shaw recently described them as “dad rock,” and that seems about right. Their music just sounded generic to me. Hate that I missed “Take Me to Church” for them. 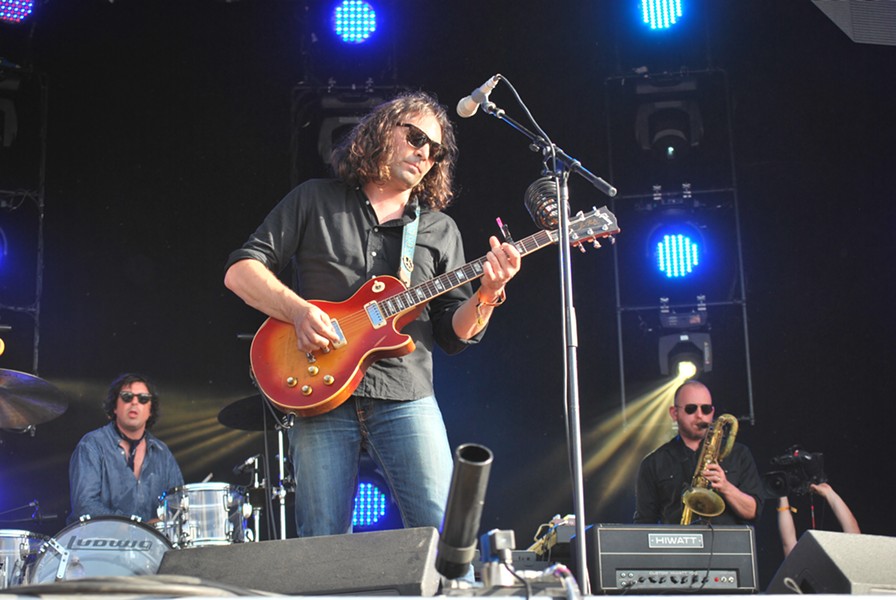 Saturday night’s line-up featured Mumford & Sons and My Morning Jacket, but I’m not a fan. So I spent most of Saturday evening chilling at the campsite. I needed to conserve my energy for a big night of acts that I actually really wanted to see.After the sun went down, we ventured out for the tail end of indie-pop duo Belle & Sebastian and then headed over to see SBTRKT, the post-dubstep musical project of Aaron Jerome. Jerome prefers to use the band name even though he’s a one-man act because he’d rather let the music speak for itself. His set was synth-heavy and poppy and just what I needed. I spent most of his set staring at the rainbow flashing lights on the Ferris wheel near the stage. I swear the lights were moving with the music. And no, I wasn’t on drugs.

I really had my heart set on seeing ’80s thrash metal band Slayer, which was scheduled for midnight. But there was a last minute schedule change, and Slayer was moved to 10 p.m. The public relations team at Bonnaroo did send an email alerting the media of the change, but the internet connection is spotty at Bonnaroo late at night. And I didn’t get the memo. Bummer.

Finally, my night closed out with the one act I’d been waiting all weekend for — dubstep/trap DJ.Bassnectar. I’ve seen him a number of times, and his shows are always so energetic and magical. This one was probably the best I’ve seen. Bassnectar killed it with bass drops so insane, they seemed to make my heart stop for a moment. His light show was beautiful, and the crowd was filled with all manner of glowing light sticks, glow ropes, and LED hula hoops. Toward the end of his set, a massive cloud of smoke shot out from the stage, and as it dissipated, it uncovered a cloud of glitter confetti that washed over the crowd. It was one of those fantastical Bonnaroo moments that make the heat, the crowds, and the stress of camping all worth it.We left Sunday before the music started, so we missed Florence + The Machine and festival headliner Billy Joel. But that’s okay. I’d rather have that Bassnectar show be my final ‘Roo music memory for this year.