House of Lightning and WRONG, Wednesday at the Hi-Tone 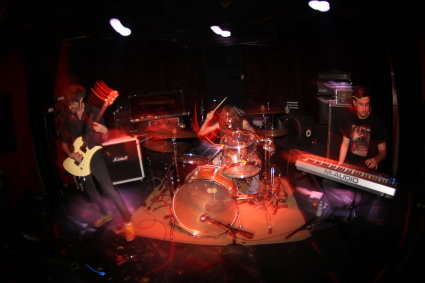 WRONG (yep…all caps) and House of Lightning are newer names in the all-things-heavy underground, but boast impressive membership pedigrees that their respective sounds each expand upon. WRONG is a quartet some readers may have caught opening for Nothing and Torche at the Hi-Tone back in March. Torche’s drummer, Rick Smith, is in this touring version of WRONG, which also features Eric Hernandez, formerly of the great and sadly overlooked Capsule. WRONG covered Nirvana’s “Stay Away” on this year’s Whatever Nevermind tribute compilation, released by Robotic Empire, and that label is also responsible for last October’s four-song debut 12” EP, Just Giving. Freshly signed to Relapse Records, as per a press release issued on June 17th, WRONG is probably sick of reading references to early Helmet, but with a sound this reminiscent of the Strap It On (1990) and Meantime (1992) albums, from riffs to vocal delivery, what did they expect? They are clearly super-fans of the noise-rock/alt-metal pioneers.

House of Lightning is a duo (known to tour as a 3-piece w/ a keyboardist) that was founded in 2012 by Henry Wilson, longtime drummer for Floor, one of the many members that went through Cavity’s revolving-door lineup, and founding guitarist in the mid-00s band, Dove. Wilson, who covers guitar, synth, and vocals in House of Lightning, is joined by his former Dove band mate John Ostberg on drums. Though the band previewed tracks online as early as 2012, activity surrounding Floor reunion shows and the trio’s amazing comeback album Oblation put the House of Lightning debut full-length, Lightworker, on hold, though it was finally released last October on Fair Warning Records. House of Lightning recalls Floor and Torche only in the sense that the riffs are huge and the vocals soar with a golden-throated grace. While touches of Torche, Floor, Dove, and Capsule can be heard on Lightworker, the album is defined by what it miraculously manages to invoke while avoiding the high risk of overt, try-too-hard failure: Van Halen’s last three albums during the original David Lee Roth era, late-70s Rush, Thin Lizzy, the busiest riffing of original Bay Area thrash, the sadly overlooked and misunderstood late-90s/early-00s post-hardcore enigma Party of Helicopters, and more playful Melvins moments (along with that band’s rhythm section, Big Business). In truth, the band sounds unlike anything operating within the topical, forward-thinking heavy music scene.