Gonerfest is not the biggest music festival in the world, or in Tennessee, or even in Memphis. In its twelve years of existence, it’s evolved from an ironic name for a small gathering of like minded musicians and fans into a full fledged cultural event, a permanent entry on the calendar that says “clear this weekend, it’s rock time.”

For the last nine years, I have found myself filming some or all of Gonerfest, first for the sorely missed Live From Memphis, and now for the Rocket Science Audio live stream. From my perspective, it’s been a strange mix of progression and regression. For LFM, we filmed with then state-of-the-art DV and HD cameras. On Saturday I recalled wading into an aggressive crowd outside Murphy’s for the New Orleans metal band Tire Fire, protecting a $1,000 new Sony HD camera while the band threw firecrackers at me. I don’t think that video has ever seen the light of day. This year, during the same time slot, I wielded a hopelessly obsolete Sony Handicam wired into a broadcast system that was state-of-the-art in 1990. But that system was feeding into the internet, and people were watching live from all over the U.S., as well as in Germany, Japan, Sweden, Denmark, and even one in India. Last Saturday afternoon, as Australia woke up, our homebrew crashed under the weight of too many simultaneous viewers. This year’s festival was extremely well attended—Saturday night at the Hi-Tone was the biggest crowd I’ve ever seen at Gonerfest, or at the Hi-Tone for that matter—but a tipping point is approaching where there will be more people watching on the web than dancing in Memphis. 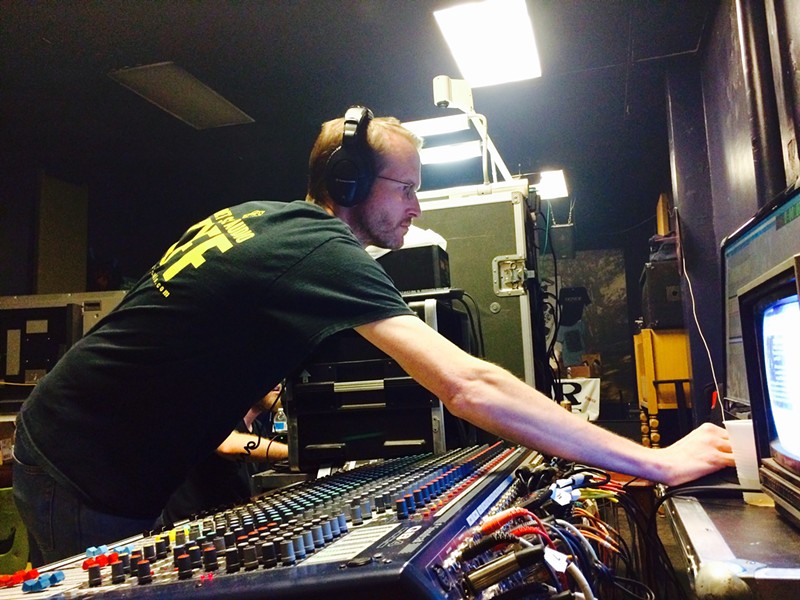 I love running a camera at Gonerfest, because it lets me focus on the music, and puts me in a position to watch and listen. Memphis was well represented, and the natives made a big impression on the out-of-towners. Ex-Cult opened the festival at the Cooper-Young Gazebo with a ruthless precision that eventually loosened up the crowd. That night, the Sheiks proved they’re one of the city’s best outfits by opening the show as a three piece and closing it down backing up Jack Oblivian, who spiked a set full of his contributions to the garage rock canon with a ferocious cover of Television’s “See No Evil”. Aquarian Blood, led by Ex-Cult guitar mastermind JB Horrell, brought the crowd a blast of Source Family psychedelia tinged with the hardcore punk he was weaned on.

I heard more than one person comment on the increased number of women at Gonerfest this year, both on the stage and in the audience, and nowhere was that more visible than in the Memphis bands. Nots took a victory lap on Friday night after an explosive debut last year. The coveted sundown Saturday slot went to Sweet Knives, the reincarnated Lost Sounds fronted by Alicija Trout. The Sweet Knives’ ferocious performance highlighted the strength and endurance of Trout’s songwriting. As I staggered away from the stage, a female friend grabbed me and yelled “How could you NOT bang your head to that?”

I’m always eager to see the bands from Australia and New Zealand, and this year’s batch included my biggest discovery of the festival, Pink Tiles from Melbourne, whose three-woman front line charmed the crowd with pop hooks on Thursday night. Afterwards, I heard a Memphian tell one of their singers “Y’all make me want to move to Melbourne.” To which she replied “We want to move to Memphis.”

There were just too many awesome acts to mention here. Obnox’s Bim Thomas was probably my favorite vocalist of the entire festival, and worked the crowd with charisma to spare. Blind Shake from Minneapolis rocked the baritone guitar like I’ve never seen it before. Nobunny stripped down to his underwear and turned on the disco lights for an explosive Saturday night. Timmy’s Organism was another show-stopper on Friday.

Perhaps the most anticipated set of the fest was Ty Rex, in which garage rock’s current leading light Ty Segall started out to reinterpret Marc Bolan songs, but ended up leading an insane party. I was yelling for “Mambo Sun”, but his twisted yet faithful cover of “Cosmic Dancer” ended up being exactly the song I didn’t know I wanted to hear. And when Ex-Cult frontman and Memphis Flyer music editor Chris Shaw joined him for an unlikely punked up take on The Doors’ “Break On Through”…well, you had to hear it to believe it.

But if one musician at Gonerfest 2015 outshone all the others, it was Quintron. He opened Saturday night with an all-female band called First which debuted some new guitar driven punk compositions and then he and Miss Pussycat closed it down with with a transcendent shower of balloons and swampy organ funk. His last Gonerfest headlining set is on the short list for the best thing that ever happened at the Hi-Tone, but this year’s set just might have topped it.

I’ve had the privelege of watching him evolve over the years from the possessed madman of The Amazing Spellcaster and The Oblivians Play Nine Songs With Mr. Quinton to a more controlled, Prince-ly musical mastermind, He seems to have bounced back from recent health problems, and his post-treatment noise work with Weather Warlock has seeped into his mainline show, which leant it a, dare I say, spiritual grounding. It was a unique experience that personified the best of Gonerfest, and made me hopeful for the future of the music.