A Conversation with David Bazan 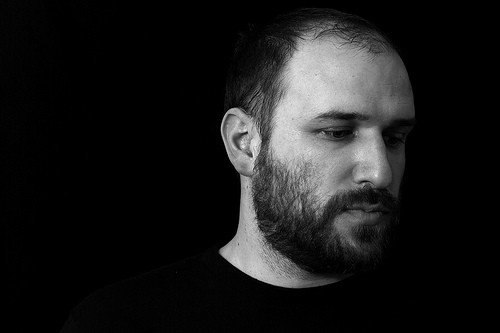 Seattle-bred songwriter David Bazan returns to Memphis this Thursday on his latest cross-country living room tour. Much of Bazan’s discography couples what he calls a mix of “autobiography and fiction.” The son of an evangelical pastor, he began tackling difficult questions in his songwriting, such as Christianity as he was raised to understand it, since the inception of his band Pedro The Lion in 1995. 2009's Curse Your Branches was penned as Bazan’s breakup record with God. Bazan Monthly, his latest project, disciplined Bazan into releasing two tracks every month. The final result ended a three-year songwriting dry spell and led to some self-realizations. “It just showed me that I really can make music that I like anytime,” Bazan says. “Somehow I had doubted that for a long time.” The Flyer spoke with Bazan about the Monthly project ­— and how he narrowed down half of the songs to re-record for his next full length, which is due out May 13.
1) Your discography feels autobiographical in a sense. With writing two songs a month, did that continue? Did you notice a theme, or “discovery process,” in your songwriting throughout both volumes?
Not all of my songs are autobiographical, even if a lot of them that feel that way. But there are plenty that are. My guess is it’s half and half. The more I’m writing, the more I’m kind of leaning into that mix of autobiography and fiction. It’s super fun and interesting to have certain bits of songs inspired by real events and then be able to jump off from there to any direction that makes a cool song or verse or chorus.

2) Since these songs weren’t written together in a traditional sense, where did ideas for lyrics stem from on this project?

Well, especially in a time-crunch situation, lyrics are, for me anyways, the hardest thing to come up with. I’ll pick one song and talk about it to give you an idea of how it went. On the song “Over my Eyes,” which on the new full length will be called “Both Hands,” I was just writing lyrics. I had a song structure and a melody and I was just filling in lyrics that made me not bummed. I didn’t feel like, “Oh, I’ve got something great to say. I was just kind of flailing around and plugging in lyrics that I hoped didn’t suck. Because of the time constraints that’s about all I had time to do. As it turns out, I didn’t know at the time what I was writing about necessarily. Maybe I had a hunch, but it could have been two or three different things. And then once the song came out and I couldn’t really change it anymore, it turned out I loved it. It turned out to be about this one really important relationship in my life, and a lot of that I really didn’t know going in.
3) How does it feel sitting with these songs as opposed to sitting with a more traditionally recorded album?
Pretty similar. My subconscious is the thing that is weaving all of the things on a record together. Because the deadlines would come every month, I was writing all these tunes in a five-month period, which is, in some cases, even a shorter period than writing an album. Sometimes you write a record over a couple years. Because these songs were written in such close proximity of one another, they really hang together thematically in a way I couldn’t have planned in the same way. The links between the songs are really nuanced and not heavy handed, but in that sense they do feel like they belong together. Each monthly volume is more album-like than I could have anticipated.

4) How did your Monthly project prepare you for your next full-length?
It just showed me that I really can make music that I like anytime. Somehow I had doubted that for a long time. I felt like I didn’t have access to what I needed to make the music I wanted. I mean that internally, not that I didn’t have the tools. I have tools coming out of my ass, it’s just that the internal software wasn’t set up right somehow. Those deadlines pushed a lot of stuff out of me that I really like. I guess what it taught me moving forward is that if I’ve gotta set up a deadline to make the thing happen, then do that, but the point is to make shit. Don’t give into self-doubt. It’s ever-present, but don’t let it dictate how your process is going to go. Just make shit.
5) What are the details on your next record?

The record is done, and, as it turns out, it’s a collection of the monthly stuff that we have modified and cleaned up and changed and tweaked. We’ve chosen 10 of the 20 monthly songs and put them on a record. I wanted a wider audience to hear this stuff that I’m so proud of. The distribution model we were using was cool, but it didn’t really have the same reach that a full-length does. That’s saying something because full-lengths don’t have the same reach that they used to. It’ll come out May 13, and I’ll be supporting it all year after that. Then my plan is just to put out a record every year.
6) You said the themes came together in a way you couldn’t have planned. But did you notice anything when you sat down and put 10 songs next to each other that you hadn’t noticed when you were releasing them month-to-month?

I did. They were pulled from both Volume One and Volume Two, which both feel differently to me. Our initial criteria for choosing a song was just … tone. Lyrics were not really a consideration. The lyrics all hung together enough to where that just wasn’t our first criteria. Once we did choose the songs, I started looking at the lyrics, and I thought, “Okay, what’s here, and how do these flow together?” Coincidentally, it worked great. What I noticed was, a lot of songs obsessed with relationships, particularly, I guess, my marriage to my wife and the way that touring and the occasional turmoil of trying to do this crazy job for a living affects things. It’s just about

vulnerability and longing and it all hangs together in a way that I’m pretty moved by.


7) You abandoned Spotify, referring to it as “Straight up class warfare.” How has splitting from streaming-services allowed you to develop a closer relationship with your fans?

The landscape of that stuff is a little more complicated than some of the sound bites I’ve uttered. Spotify is a horrible way to support artists. It’s an amazing way to discover music. Once you discover music that you love, you then have to take another step to support it. Participating in Spotify in no way supports the production of music or supports the future of artists making music. As a consumer, I’ve really begun to appreciate Spotify as a discovery tool, which really doesn’t change my perspective that if someone only listens to Spotify, it’s a pretty clear lack of commitment to supporting music. Since I’ve started subscribing to Spotify, I’ve bought way more music because I’m discovering more music than I ever have. I love a percentage of it, so I’m buying more records on iTunes in the last couple of months than I ever have. To your question, the house shows are a really great place to have slightly more complex discussions about stuff like that than a venue. People are just tuned in a little bit more. There are fewer distractions. It’s easier to have a nuanced discussion something like Spotify or streaming in general. You’re able to have a really sane back and forth about it. Honestly, my kind of coming around to Spotify as a consumer and loving it as a discovery tool came from hearing what people at the shows were saying. It’s not just the information going one way where I’m just schooling people about what reality is in the music business, but it’s also hearing the perspective of everyday music consumers. We’re all broke, and we’re all trying to connect with music. It’s super important to us. I love it. It’s one of the very best things in my life.


8) What artist or band have you been listening to lately that you’d recommend?


I’ve been listening to Viet Cong. I’ve been listening to a band called Spray Paint, this record called Dopers.The new Pusha-T record (King Push – Darkest Before Dawn: The Prelude) is really good. Like really good. I haven’t bought the Pusha T record because I’ve only listened to it once, but I’m pretty sure I’m going to because after three or four more times I’ll know for sure. I’m listening to that on Spotify. I discovered Spray Paint from a friend. I discovered Viet Cong on Spotify. Now I bought two Spray Paint records and two Viet Cong records. That’s all happened in the last two weeks, and I really like them. It’s just such a great system for discovering and then buying music and owning shit that you love — but not getting stuck with records that you’re just not that into. We all did that for so long with CD’s.
Purchase tickets to the show here. Listen to Bazan play "Options" from Pedro The Lion's 2002 album Control below: