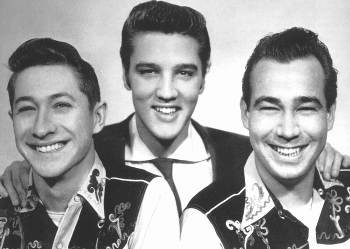 Scotty Moore has died. The influential Elvis Presley guitarist, and pillar of the early rock-and-roll sound was 84.


Moore was Elvis' senior by a few years and a couple of years younger than bassist Bill Black. But, to his fellow musicians, he was known as, "the old man."

In a field full of flighty creative types, Moore was famously reliable and, during his tenure as Elvis' first manager, he kept photo albums filled with receipts the way other musicians collected photographs and souvenirs. It's not surprising that "the old man" would move into a management position for Fernwood Records when Elvis got the G.I. Blues for real.


If Moore was uncommonly reliable behind the scenes, the licks he coaxed out of his big Gibson hollow body electric guitars were reliably hot. His unique style blended the contemporary R&B of B.B. King with hillbilly blues sounds pioneered by artists like Jimmie Rodgers and Hank Williams. He whisked it all together with the jazzier electric lead stylings of Nashville cat Chet Atkins. If Moore didn't really sound like any of his influences, it was close enough for rock-and-roll.


Moore wasn't serious all the time. He sometimes joked that he was in the only band in the world conducted by the gyrations of its lead singer's backside. And for all his usual humbleness and modesty no album has ever been more perfectly named than his 1964 solo release, The Guitar that Changed the World.

Elvis may have been crowned the King of Rock and Roll, but according to most accounts his highness didn't get in the way too much when Moore and Black were working out arrangements on recordings of songs like "Mystery Train," "That's Alright," and "Baby Let's Play House."
Moore was inducted into the Rock-and-Roll Hall of Fame in 2000 and into the Memphis Music Hall of Fame in 2015.