Insane Clown Posse at the Hi-Tone 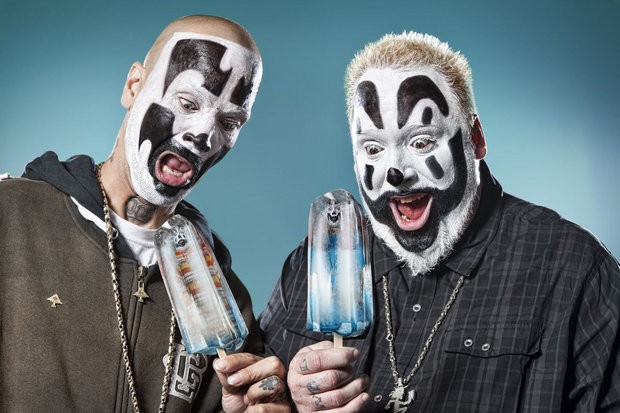 Let’s play Jeopardy! They took on Sharon Osbourne in a public feud circa Y2K and came out the winners (perhaps that’s because the crux of the dispute happened to be Coal Chamber, her clients at the time). They teamed up with Jack White and Jeff the Brotherhood on a Mozart composition titled "Leck mich im Arsch" that really does have scatological basis (it loosely translates to “Lick my A**”) and really WAS NOT a collaboration born of comic irony.

They spent years doing more of it themselves than most entities acceptably associated with “D.I.Y.” They probably get hundreds of Christmas cards each year from older employees of Faygo Beverages, Inc. They released their first EP in 1991 and that was 14 studio albums, 12 compilation albums, 7 Eps and 37 singles ago.

While the rest of the world got a ton of mileage out of their existence as a generous punchline, a cult of fans coalesced that is more clearly defined, loyal and insular than anything (of its type) ever witnessed in pop culture. They have turned pop/rock history’s notions of “theme” and “concept” into an ongoing and rather complex alternate universe known as the “Dark Carnival Saga” that gives The Illuminatus! Trilogy a run for its money.

They boast what might be the greatest disparity between critical hatred and commercial success in the history of popular music. Their fortuitous decision to don face-paint has made them physically ageless in an era of great ageism while logic would dictate that musical and aesthetic choices should have aged like a Happy Meal in a hot back seat, but no expiration date approaches. They sued the FBI and…well…sort of won. They wrestled for Extreme Championship Wrestling from 1990 to 1997, for the WWF in 1998, the WCW for the next two years, and have performed in the self-formed Juggalo Championship Wrestling (originally known as “Juggalo Championshit Wrestling” because…why not?) ever since.

1. A covers album with interpretations of House of Pain, N.W.A. Tears for Fears, Public Enemy, and Christina Aguilera,

2. An hour-long tribute to Too Short’s 1987 porno-narrative “Freaky Tales” (that also shared its title),

3. A remix/outtakes/unreleased collection that featured guest appearances by Three 6 Mafia, Color Me Badd, Ice Cube, Geto Boys, and Kottonmouth Kings. Their in-house Psychopathic Records (once again distributed by Sony’s RED Distro) has been in operation since 1991 and is a production company that handles professional wrestling, release of music and videos by its massive roster of artists, tons of merchandising, and as of 2010, allegedly generates around $10 million per year in revenue. (They count Pearl Jam and Gong (!?!) among their musical inspirations. And of course, there’s “Miracles."

If your answer was “Who is Tom Waits” or “Who is Fugazi?” then apparently you just stepped from a time machine. That was, of course, a tiny non-chronological snippet of Insane Clown Posse’s last three decades, and however one might feel about their history and static empire, there’s no doubting that it’s one of the only genuine “others” in modern music culture.

As for more recent ICP-related news, in customary macro-style the group released The Marvelous Missing Link: Lost and The Marvelous Missing Link: Found last April and June, respectively. Bringing ICP (and it appears, just ICP…though there will no doubt be some guests of some stripe onstage) to Memphis is the 2nd leg of "The Riddlebox Tour", named so because the aforementioned two albums constitute the first and second (respectively) parts of the 3rd Joker Card in the second Deck of the Dark Carnival Saga.

It has been announced that summer of 2017 will see the release of the pair’s next studio album, The Diabolical Karma Twins. Tonight’s (Wednesday, 10/5) ICP show marks the group’s Hi-Tone debut after headlining three package tours at The New Daisy since 2009.

Seeing the Hi-Tone undergo a Juggalo transformation for an evening will be interesting, to say the least, and on some (or many) level(s), it may be the craziest show yet to grace the club’s Crosstown location. Doors open at 6pm and the all-ages show will be $23 advance and $25 dos.