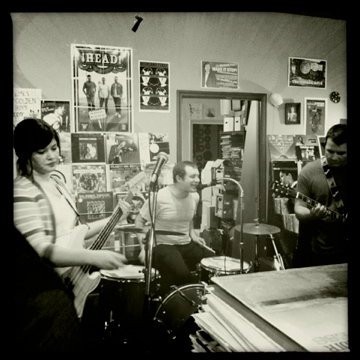 This Saturday night one of the most interesting punk bands to come out of the Goner records scene will reunite for a show at Bar DKDC. Formed after Sector Zero bit the dust, Sharp Balloons featured Joe Simpson (True Sons of Thunder, Rat Traps) Zac Ives (Final Solutions, Son of Vom) and first time bassist Heather Simpson.
The band had an unwritten rule that if a member wrote a song they had to sing it, making for songs that were as unpredictable as they were catchy. Sharp Balloons frequently played the local punk haunts of the last five years, including the final days of the Poplar Lounge, in addition to familiar places like the Buccaneer, the old Hi-Tone, and Murphy's.
While the gig on Saturday appears to be more of a reunion show than a full fledged re-appearance, Saturday night should serve as an interesting window into the Memphis punk scene of the past. Check out a live video of Sharp Balloons covering the Toy Love song "Pull Down the Shades" in Jackson, Mississippi below, and get to Bar DKDC by 10:30 p.m. this Saturday night. As always, the cover is $7.