Good news for Fuck lovers with a vinyl fetish. The band’s terrific early LP Pretty... Slow is available as a big round record with a hole in the center for the first time ever, thanks to Steve Shelley’s Vampire Blues label. To give you a better sense of who all these folks are, and what they get up to when they’re together, here’s a video with Fuck’s frontman Tim Prudhomme (a Memphis dweller), playing punch-balloon with fellow Fucker Kyle Statham singing/strumming, and Sonic Youth drummer Shelley, holding down all additional percussion in the parking lot at Shangri La Records.

But that’s another band and another story.

Fuck was born in the San Francisco Bay area, in 1992, just a few years after The Red House Painters

(later Sun Kil Moon) pioneered the genre nobody but music writers called Slow/Sadcore. Like the House Painters’ (whom Shelley sometimes drums alongside in SKM), Fuck was attracted to slower tempos, lower volumes, and all the dynamics that rock-and-roll forgot. But the F-band was odder, and artier than other slow/sadcore bands, and countrier too, in a Palace Brothers kind of way. They also had a name that turned every public bathroom into a crude advertisement, even if it couldn’t be printed in most mainstream publications or shouted out on radio. Fuck’s shattered, shimmery pop was sweet by nature and always more awkward than aggressive. In a world where band names made sense, they’d be Kiss, and Pretty… Slow, would be one to remember.

Things start off tense with “Wrongy Wrong,” a hurried two chord waltz that bristles with aggression, breaks into discord then fades into soft, sampled swing music from a long time ago. The narrator puts his headphones on and acts “like nothing’s wrong,” but that’s obviously not the case.

The three-count rolls along with an egg shaker hiss and organ drone in “I Am Your King,” a Lou Reedy monologue about a slow-talking idiot who’s “full of it” with a whole lot to say. “Make you laugh, make you look, make your life miserable,” is both a great lyric, and a reasonable thesis statement for a record that sneaks up on you sonically and emotionally.

If there’s a perfect song on Pretty… Slow it’s “In the Corner,” a fuzzy, lo-fi country ballad that sounds like it was sung from the bottom of bucket in another room, in a neighboring state, and gets all the fumbling, cringe-worthy wonderfulness of a first meeting that turns into a sloppy make out session. “You look so sweet in your wrap-around dress. I watched from the corner… corner… corner. Oh, yeah.” Maybe those are horns lifting everything up, maybe guitars. Probably guitars.


“From Heaven,” finds Fuck channeling the Velvet Underground on a song about Saturday night, wasting my time, and angels. Guitars shimmer and twinkle like piano keys.Then things get considerably more ominous with numbers like the poppy “One Eye Out the Door,” and the squalling, thundering, “Monkey Does His Thing,” which plays out like the subtext of a Jim Thompson novel set to an increasingly heavy, horrorshow groove. “She came home to run away... but when she got there the locks on the doors had been changed.” And so it goes.

“Pretty Pretty,” is a vibe-y little instrumental. Lasting just over a minute it’s like exotic doorbells, or an extended TV station identification theme circa 1969. It sets up “Shotgun (H)ours,” a ballad that searches for the place where anxiety and beauty fuse — like a nuclear sunset or a flying saucer invasion. “I look at the sky and don’t know what I’m looking for,” Prudhomme sings over ringing single string guitar leads that cry like the tortured ghost of real true Bluegrass.

Some fucks are here and gone. Some fucks go on and on. This Fuck put out eight albums, a mess of singles and EPs, and is technically still active. As you might expect from a band with longevity that likes to play around, the catalog is all over the place, ranging from novelty and period pastiche to giddy, glorious indie-pop in the mold of bands like Pavement and The Grifters. Pretty… Slow has the kind of purity you only ever find on early records, married to a kind maturity you usually have to wait for. The pieces are all distinct, but fit together like a brief and tidy novel. It’s a great catch by Shelley who's also reissuing Fuck’s third album Baby Loves a Funny Bunny. 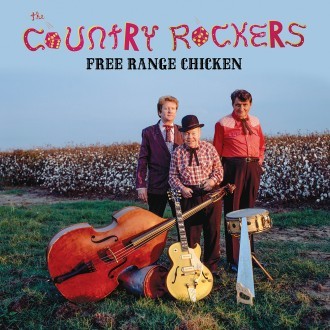 On January 6, Big Legal Mess will reissue an artifact from back in the days when Memphis’ glorious past was known to collide with its chaotic present in the most peculiar ways. The Country Rockers 13-song opus Free Range Chicken (Now with two more songs!) is available once again, with a super set of liner notes by longtime Memphis Flyer contributor, Andria Lisle.

One of the most distinctive memories from my early days in Midtown, is of regularly seeing Gaius Farnhm (AKA Ringo), pulling his grocery cart down Union Ave. following a visit to Seesel’s. Farnham was the octogenarian dwarf drummer for The Country Rockers, a well known area character, and the recipient of many honks and waves. If his giddy cover of "Wipe Out" didn’t drive like the Surfaris, it had an otherworldliness on par with the original "Telstar" or some of the crazy instrumental rock that blasted out of Sweden and Singapore in the 1960’s.

The “Keep Memphis Weird” contingency was strong in the 1980’s/90’s, and Farnham’s band, the Country Rockers, was a magnet.


Studio musician and Panther Burns alum Ron Easley caught his first Country Rockers set in 1986. The stuck-in-time band lived up to its name with a school bus driver up front, a female bassi

st named “Miss Lillian,” and Ringo on drums. They were playing Eddie Bond covers and country classics at a cinderblock shack called Dennis’ Place on Lamar when Easley walked in on a whim. When Miss Lillian got religion and left the group, Easley joined, and introduced his new Lamar Ave. band to the punks at the Antenna Club on Madison., and eventually the punks at CBGB’s in New York. The band’s last gig was Stockholm’s Lollipop festival in 1996, where Easley, Sam Baird, and Farnham shared a bill with Bob Dylan, Beck, and the Wu-Tang Clan.

The two bonus tracks on the Big Legal Mess reissue — "Rock Around with Ollie Vee" and "Was Hab Ich Falsch Gemacht" find The Country Rockers straddling a gap between tradition and something from another dimension. But the straight honky tonk of, “Barrooms to Bedrooms,” and hopping covers of standards like, “Pistol Packing Mama,” and, “Drivin’ Nails in My Coffin,” are still the best tracks on a terrific document, with guest appearances by Alex Chilton, Jack and Amy Adcock, Roy Brewer, Jimmy Crosthwait, Sonny Williams, and more.

“Guitar Polka,” and, “See You Later Alligator,” are a lot of fun too.