June 12, 2017
1 comment
I’ll be honest – I had low expectations for the Bonnaroo Music & Arts Festival this year. I’ve been covering the annual summer fest in Manchester, Tennessee, for the Flyer since 2010, and in my personal opinion, the line-up for the festival’s 16th year was the worst it’s been in those eight years. The headliners were U2 (not my thing), the Red Hot Chili Peppers (cool, but they headlined ‘Roo just a few years back in 2012), and The Weeknd (sad to say I’m not hip enough to know much about him).

But they say the secret to happiness is low expectations. After all, you’ve got nowhere to go but up when your bar is way down low. I’m pleased to admit that I was wrong. This year’s festival was filled with pleasant surprises — new-to-me bands that literally blew me away, stellar weather for most of the weekend, and a new DJ/hip-hop stage that featured up-and-coming acts into the wee hours of the morning.

Nevermind the Thursday night arrest of 45-year-old David E. Brady of Albany, New York, for attempting to sell thousands of fake drugs (counterfeit ecstasy, acid, mushrooms, and more), claiming he was doing “God’s work.” Luckily, he was taken into the Coffee County Jail before he could do too much damage.

Thursday night is always low-key with lesser-known acts performing on the festival’s five main stages. We arrived in Manchester around 1 p.m. Thursday, picked up our press credentials, and set up camp. Then we headed into Centeroo — the name for the massive festival grounds — with no real agenda. We popped by a screening of the Nashville Predators Stanley Cup playoffs game at the Which Stage, our first Bonnaroo sports viewing experience (lots of disappointed Nashville-area locals there in yellow Preds tees). As for the music, we didn’t recognize a single name on the line-up for Thursday night, but we were eager to check out the new Other Stage.

Bonnaroo’s five main stages are called What Stage, Which Stage, That Tent, This Tent, and in the past, there was an Other Tent. The tents tend to host smaller acts, while the What and Which stages are reserved for headliners and bigger-name bands. The former Other Tent was typically host to DJs and not-so-well-known indie acts, but the tent (literally a large tent shading a grassy area where fest-goers huddle to catch some respite from the summer heat) was upgraded to a full-on stage slightly larger than one you’d find at the Beale Street Music Festival. This new Other Stage was outfitted with lighting equipment capable of laser shows that gave the area a rave-like feel.

It was there, at around 10:15 p.m. on Thursday, that we stumbled upon Haywyre, a dubstep/glitch hop DJ and composer, who was seriously killing it with dirty beats and drops that could make your heart skip a beat. Just to the left of the new Other Stage was another complementary attraction called The Oasis — a sandy faux beach with blacklight faux palms, volleyball courts, and a Bacardi-sponsored tiki bar. We sat on the edge of the sand in the glow of purple palm trees and took in Haywyre’s set as fest-goers spiked balls behind us. Although the temps reached the high 80s on Saturday and Sunday, Thursday was actually quite chilly providing some relief from the warm weather to come.

On Friday, I popped by the What Stage (the largest venue on the farm) to catch a bit of Francis and the Lights, an energetic indie-pop solo artist whose stage show involves plenty of synthesizers and processed vocals alternated with some sweet dance moves that have Francis (“the Lights” is a reference to both stage lights and computer pixels) convulsing and spinning across the stage in a dizzying performance.

We caught a most of the Cold War Kids show on Friday, although I’ll admit that sort of indie bro rock isn’t my thing. But that didn’t stop me from signing along to their hit, “Hang Me Out to Dry.”

Later on Friday night, we stumbled onto, perhaps, our greatest (and most pleasant) surprise of the fest — the Preservation Hall Jazz Band performing at That Tent. This New Orleans-based funky jazz outfit has been around since 1963, and while I’d heard the name plenty of times, this was my first time hearing their music. Maybe it was the five or more beers I’d had by then, but I quickly learned that I’m quite the jazz dancer (or at least I thought so in my buzzed state). The brass beats and bass were infectious, and I felt as if I’d been whisked back to some 1960s jazz club, where Jack Kerouac himself would have been bopping and nodding to the music.

Bonnaroo always features at least one rock god-style main headliner whose fanbase spans multiple generations. There was Paul McCartney in 2013, Elton John in 2014, and the remaining members of the Grateful Dead in 2015. This year that act was U2 in a rare U.S. festival appearance, and plenty of people were genuinely stoked about that. It was, after all, also the 30th anniversary of The Joshua Tree album. I can’t say for sure why, but there’s just something I cannot stand about U2’s music (for the record, I have the same exact feelings about Nicolas Cage’s acting career). Anyway, the main headliner typically closes out the fest on Sunday, but in a rare twist, U2 was set to play on Friday night. My partner Paul lacks my irrational hatred for U2 and was excited to see them, so off we went. I’m sure any U2 fan would have been impressed, but something seemed off with volume on the vocals and the show felt like it lacked energy. That sa

id, even I caught myself singing along to nearly every song since they pretty well stuck to a setlist of hits.

Our Friday night experience closed out with a stellar performance by EDM/trap/electro-house DJ Major Lazer, one of the few names I was excited to see this year. He played well into the early morning hours with hits like “Lean On” and the Justin Bieber collaboration “Cold Water” as a pulsing light show and confetti rained over the crowd.

On Saturday, we caught a perfect daytime set by Canadian indie-pop/LGBT rights activists Tegan & Sara, who were joined on their last song by comedians/podcasters 2 Dope Queens Jessica Williams and Phoebe Robinson. The Queens had performed a set in the air-conditioned comedy/cinema tent earlier in the day. While we missed their set, we did catch a screening of cult classic Napoleon Dynamite and Q&A with Jon Heder (Napoleon himself) in that comedy/cinema tent later in the evening.

Well after sunset, we dropped into the last half of Chance the Rapper’s set, which ended beautifully with his 2 Chainz/Lil’ Wayne collaboration, “No Problem.” And then it was time for the Chili Peppers. As teen of the ‘90s, I was, of course, a Chili Peppers fan, and though I saw them headline ‘Roo just a few years back, this show didn’t disappoint. Anthony Kiedis, Flea, and company stuck to the hits, which lead to a crowd-wide 90s sing-along of epic proportions.

We had plans to head out of town Sunday before the sun set, meaning we missed the closing set by The Weeknd, but I’ll embarrassingly admit that I’m not terribly familiar with this Canadian R&B artist’s work. In fact, my lack of familiarity with most of the bands on this year’s line-up leads me to believe I may be getting old. I just don’t know what the kids are listening to these days, and I tend to get the most excited about the ‘90s acts.

That said, I did catch one last show on Sunday by up-and-comers Tank and the Bangas. This New Orleans-based funk-soul group has been getting a lot of press lately, after they won NPR’s 2017 Tiny Desk Contest. The vivacious lead singer, Tarriona “Tank” Ball, dropped slam poet-style verses to a rhythm of saxophone, synth, and bass as the large band performed in dayglo costumes in front of a colorful backdrop that looked to be inspired by an acid trip.

So while I wasn’t so impressed with U2 (other media reports from the weekend seem to show that most attendees were far more impressed than me), I discovered my love for 1960s jazz and some new, up-and-coming acts that just may be the best thing I’d never heard of. 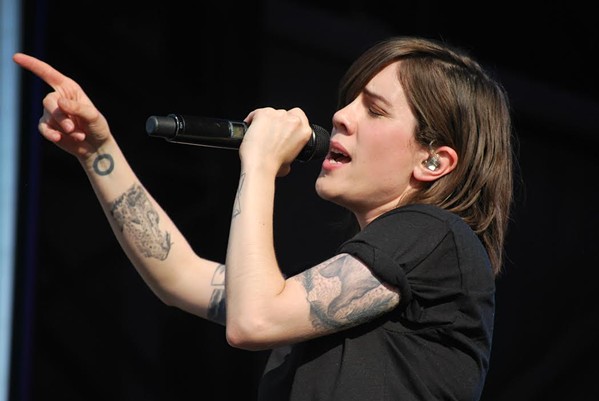