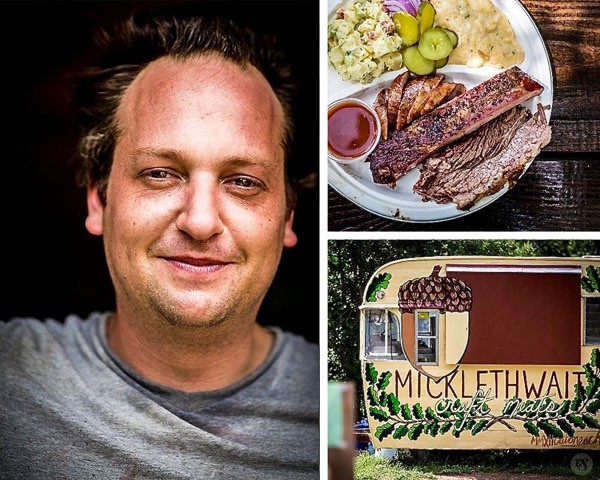 Austin band The Hex Dispensers were a delicious mix of punk and pop that won over a lot of Memphis fans. They had a good run and even played Gonerfest a couple of times. How things have changed. Tomorrow, one of the band members will be passing through town while touring up to New York for a Goner-sponsored event. But it's not what you're thinking. He won't be playing the Hex Dispensers' "Pile of Meat," he'll be serving it, and you should get on out and git you some.

Tom Micklethwait was always passionate about food, and had a day gig baking for an Italian restaurant. But around 2012, he began delving into the world of barbecue, and it has succeeded beyond his wildest dreams. Though based out of small food truck, Micklethwait Craft Meats has developed quite a reputation in Texas. As Food & Wine wrote last month, the eatery has been "turning heads at its Austin trailer. Unorthodox offerings like pulled goat, brisket Frito pie, and pork belly kielbasa helped put Micklethwait on the BBQ map."

It hasn't dimmed his love of music, either. Recently, he combined his passions by recreating the feast featured in the gatefold of Z.Z. Top's Tres Hombres album...and ate it. Billy Gibbons reportedly quipped, "I stand in awe of what he accomplished."

Goner co-owner Zac Ives says, "His BBQ is insanely good, totally unlike anything you can get in Memphis." At Memphis Made on Friday, you can find out for yourself, while Ives and Hot Tub Eric spin vinyl on the wheels of steel. Oxford's Tyler Keith will be there as well, playing a solo set. While it may not shake everyone's faith in Memphis' reign as king of the 'cue, it could do us all some good to get some strange for once. It's free and family-friendly.