“Hey, I"m looking forward to this! It's a full band and everything. It's exciting to me!” Don Bryant can barely contain his mirth, contemplating another show with old-school soul masters the Bo-Keys. With a new album out this year – his first since his 1969 debut LP on Hi Records – he's been leading the band through several performances lately. But Friday's show, dubbed “Poppa Willie's Night” in honor of Hi's longtime manager and producer Willie Mitchell, will be especially notable: it marks Bryant's return to Royal Studios, where he worked for many years as a hit songwriter for Hi. He'll be kicking off a series of three concerts being staged to celebrate the studio's sixtieth anniversary.

It was as a songwriter that Bryant gained his widest fame, having co-written the hit “I Can't Stand the Rain” with Ann Peebles, who he married soon after. And it could only have been in the Hi Records milieu, bursting with talents like Al Green, Otis Clay, and others, that a singer of Bryant's caliber would be relegated to writing rather than recording hits. And he wrote many – 154 by one account.

It started early. Having begun his career leading a vocal quartet, the Four Kings, he had a song of his, “I Got to Know,” recorded by the 5 Royales when still in his teens. “When they recorded the song it was at a studio down on North Main,” he recalls. “And I wasn't even allowed to go in the studio, I had to sit out in the lobby. That was one of the biggest deals I could have had in those days, because they were one of the most famous groups. My group was always trying to imitate them, dance-wise and song-wise. They had a lot of popular songs.”

Soon after that, the Four Kings began fronting Willie Mitchell's band. This proved fortuitous for Bryant's solo career. “My group had problems and broke up. So I told Willie, 'If you would accept it, I'd like to try doing solo.' Because singing was my thing. And he said, 'Okay, I'll try you out.' And that's how I got to sing vocals with Willie Mitchell and band.” Bryant started by contributing vocal parts to some of Mitchell's singles for Hi.

Boo Mitchell, heir to Willie's throne as manager of today's Royal Studios, says “He sang on some of my dad's instrumental recordings. My favorite is a song called 'That Driving Beat', which he sings. It's a Willie Mitchell song and Don is singing it. It is badass. It's from like '66, I think. And there's a song called 'Everything's Gonna be Alright', and it's a Willie Mitchell song, but Don is singing. And I only found this out after my Pop passed, 'cos it has harmony vocals throughout the whole song, and Don said, 'That's Willie singing harmonies.' I was like, 'No Shit!' I never knew it, man! And then, Pops wasn't around so I couldn't give him any shit about it, and say, 'How come you never told me it's you singing?'”

For Bryant, this culminated in the release of his solo album, Precious Soul, in 1969. But it wasn't long before other singers in the Hi Records stable, like Al Green, eclipsed Bryant's solo career. Part of this had to do with major changes for Hi Records, Royal Studios, and Willie Mitchell himself. Says Boo, “Right after Joe Cuoghi [Hi Records' original owner] died in 1970, I think he willed his shares in Hi Records to Pops, and so it was a big transition for him, you know. And when Joe Cuoghi died, [Al Green's] 'I'm So Tired of Being Alone' had been out for like three or four months and had only sold like 2000 records. And Pops knew it was a hit, so after the funeral and all that stuff was over, Pops basically went to Atlanta, New York, and Chicago, and just camped out at radio stations until they played it. And they finally played it. When they played it in Atlanta, it hit. They played it in NY, same thing, Chicago, same thing. And then it went platinum.”

This marked the beginning of many years of mega-hits from Green, who outsold even the classic hit makers from Stax Records. As Boo Mitchell recounts, “Stax was doing a lot of singles. And they weren't really selling a lot of albums, you know what I mean? And Al Green was doing the opposite because Willie Mitchell came from the album world. Which was more I guess what white artists were doing. Because of Hi Records. And so when he started doing Al Green, he did it with that same mentality of the album. And you know there were songs that were selling the albums...like 'How Can You Mend a Broken Heart' was the song that sold the Let's Stay Together album. 'Let's Stay Together' as a song was awesome, but all the radio stations were playing 'How Can You Mend a Broken Heart,' which was like a six minute song. It was never a single. Neither was 'Love and Happiness'.”

Bryant settled in as a songwriter for the Hi Records team. He married Ann Peebles and saw her star rise through the 1970s. But by the end of the decade there came another sea change. “You know, it was like a perfect storm of badness,” says Mitchell. “Stax posted bankruptcy in '75, which was very impactful. Then Elvis died in '77. Al Green went completely gospel around the same time. And then disco was coming in. So things were changing. Pops had partners and he was kind of outvoted to sell the label. Because his partners were business guys, you know. And on paper it probably looked like the right thing to do. Okay, our bread and butter Al Green is going gospel and the music is changing and we should get out. You know what I mean? It may not have been a good decision. But Pops made the great decision, when they outvoted him to sell the label, he made the decision to buy the studio. So that was a great decision on his part.” 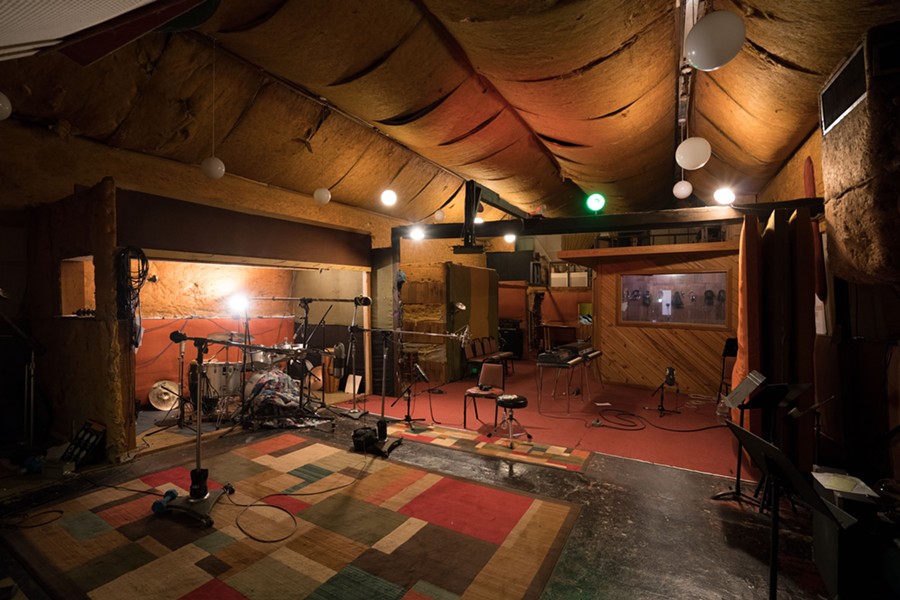 This was a pivotal moment for Royal, enabling it to continue operating without Hi. And through all these years, the studio itself has barely been altered. “It hasn't changed since 69. It's the same,” says Mitchell. And this only enhances its appeal to current day artists. Lately, after the success of the Mark Ronson/Bruno Mars hit “Uptown Funk,” recorded at Royal, the studio's star is on the rise again. Mitchell explains, “Me and my sister started Royal Records last year. And also Royal Radio. Which is an app, or on Google Play. And it's housed at Royal Studios, and it streams mostly music that was made at Royal, but all kinds of different music. We have radio shows with Barbara Blue and Preston Shannon, they have a blues show. Al Kapone has a show. Frayser Boy has a show. Charles Hodges from the Hi Rhythm Section has a show.”

A distinct family vibe permeates the studio to this day. This will be apparent at Friday's shindig. The in-studio party will feature homestyle cooking by Mitchell's Aunt Yvonne, who has served soul food to most of the renown artists who have recorded there. And now Don Bryant, with his new record, Don't Give Up on Love, out on Fat Possum Records, will return there to honor Royal's rejuvenation. “It's just like homecoming to me,” he says.

And no other living artist goes as far back into Royal's history as Bryant. “It's so awesome to have Don, because he was there with my dad almost from the very beginning, you know,” says Mitchell. He says having Bryant kick off this year's anniversary celebrations “was really the only thing that made sense to me, historically. You know, it was just like, that's the right thing to do. It's a miracle he was available because he's been touring all over the place. And, you know the stars lin ed up.”