These days, it seems that music festivals are blossoming like algae around the Greater Memphis Area. But it 's worth remembering a time when such celebrations were few and far between, and made a much greater political statement. The original Memphis Country Blues Festival of 1966 was the local counter-culture's shot across the bow at the prevailing status quo. Held at the Overton Park Shell only a week after the Ku Klux Klan held a rally in the park, it promoted a vision of radical possibilities.

For all the details, (re)read your copy of Robert Gordon's It Came From Memphis, which vividly evokes a rag-tag cohort of artists, musicians, and other blues fans whose utopian vision was rooted in a careful salvaging of the past – in this case, the genius of blues players like Furry Lewis or Bukka White, who had fallen into obscurity. These were heroes to many in the nascent hippie culture. They ended up throwing a party on a grand scale that included both living legends and cutting edge rock and funk.

Today, we again face the question of who to memorialize from the past and who to scorn. It's a perfect time to revive that spirit of communal action, and it's about to happen in two days' time when the Levitt Shell hosts rebirth of the Memphis Country Blues Festival.

The Blues Society - Kickstarter Trailer from Cultural Animal on Vimeo.

“Last year there was a commemoration of the 50th anniversary of the first blues festival,” she recalls. “And Robert Gordon and I curated a panel of people who came and talked. So Marcia Hare/Misty Blue Lavender, and James Alexander, and Jimmy Crosthwait, and Chris Wimmer, who were all part of the original events, came up. We showed a little bit of the New York Channel 13 footage that was shot of the 1969 concert. And then had all the people to talk on stage and answer questions. Yeah, it was a great conversation. Ric was there and that's where we met, actually.”

Reviving the festival was the brainchild of promoters Ric and Stephen Whitney, cousins from Memphis who learned of the original festivals just as they were looking for fresh ideas for community events. Says Ric, “The fact that there was something that happened so long ago, and it was very innovative in terms of bringing together constituencies who didn't necessarily spend a lot of time together, but the common denominator was music. And that was one of the things that we often talked about in terms of things we wanted to do in the city ourselves: to produce music-based shows that brought people together.” 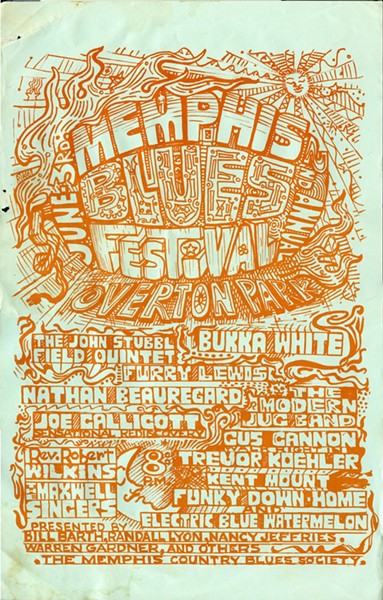 Soon after that, Ric Whitney met with Liz Levitt Hirsch, president of the Levitt Foundation in Los Angeles. “There was a salon she had at her home, actually, and we had a chance to chat about the idea in general. And then we ended up being introduced to the Levitt Shell folks in Memphis. And it sort of blossomed from there. Our biggest goal was to produce a free concert. And it worked well because the Shell produces their concert series each year, and the majority are free shows. We didn't see this as something that we were looking at making tons of money on. We really saw it as an opportunity, really, kinda looking at what's happening in the US today – there's a lot of strife, a lot of miscommunication. So we wanted to come up with an opportunity for people to use music, and particularly the blues genre, as an way to bring people together.”

Palmer, naturally, will be there to document the proceedings, and may screen a trailer for her newest work. It's a powerful moment for both her and the city, “that these two African American Memphis natives are taking on the mantle of the Blues Festival. I think my dad would have been really happy.”

It's especially fitting that the headliner for the show was a performer at the original event: Rev. John Wilkins. Kevin Cubbins, who plays in the band, reflects, “What a lot of people don't know is that this is a return trip for Rev. Wilkins. It's not his first time at the Shell. And that's not even counting the time he played with his father, delta blues and gospel icon Rev. Robert Wilkins, at one of the first Memphis Country Blues Fests in 1968. See, up until 2006, the year he retired from the City of Memphis Park Services, Rev. Wilkins was the groundskeeper and maintenance supervisor at the Shell. He was responsible for everything from keeping the grass cut to keeping the place secured and cleaned up.”

Once again, honoring the past is lighting the way forward. “It's kind of epic,” adds Cubbins. “He was there in the golden days of the late 60's, he was they guy holding the place together during its years of neglect, and now he's taking the stage in it's rebirth. Kinda cool.”