African Jazz Ensemble and the Rhythms of Freedom 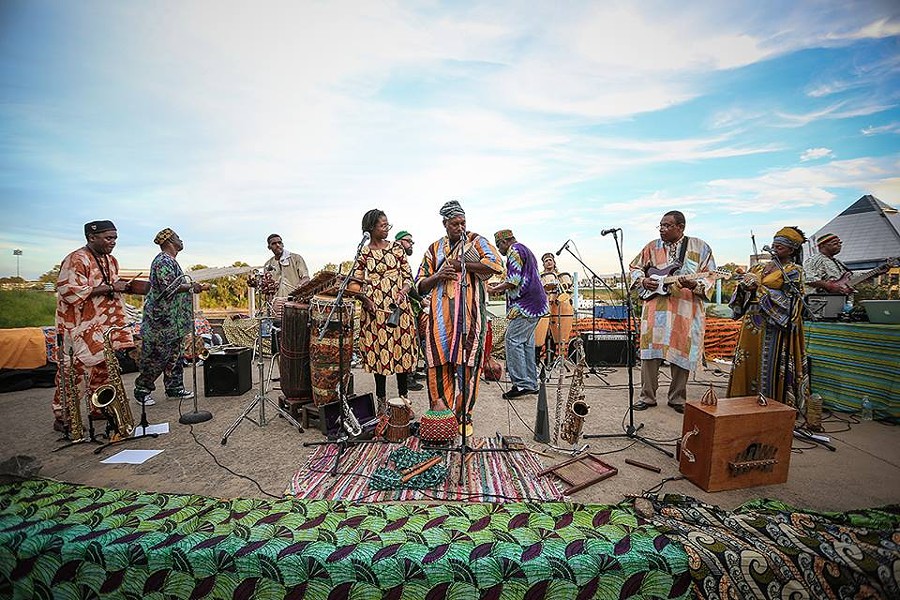 The African Jazz Ensemble may be the best kept musical secret in Memphis. Founded over two decades ago by Ekpe Abioto, they've forged a hybrid blend of influences with an impressive roster of players, many springing from the Memphis high school scenes of Melrose, East, Booker T. Washington, and Manassas. In anticipation of their show tomorrow afternoon at the Harbor Town Amphitheater, I spoke with Abioto about how the group has evolved and the message they're trying to get across.

Memphis Flyer: So you've been doing the African Jazz Ensemble 25 years. I imagine you've had some personnel changes over time.

Ekpe Abioto: Yeah, there was a vibraphonist here, by name of Ron Williams. He played with me and he died like twenty years ago. And then I recently met DeAnte Payne who's 19 years old and studying at the Univ of Memphis right now. He's been been playing vibraphone with us since we first met. And when my friend Dywane Thomas, Sr. got back from Italy — he lived in Italy for about 17 years — he started playing bass with us.

Yeah I know his son a little bit, MonoNeon. And Dywane Thomas, Sr.'s dad was supposedly a heck of a piano player.

Yeah, Charles Thomas. Yes. So he schooled Donald Brown and James Williams and all those guys, you know. I think it was 2000 when Charles died. Anyway, I play sax, flute, African percussion and Kalimba. Another saxophone player is James White. Three of us were in high school together. We were in a group back in the day. It started out as Exotic Movement and we got a record contract and it changed to Galaxy. So we started out playing together back during that time. And when it was Exotic Movement we had some other members. Kirk Whalum was in the group. We were all in high school. Blair Cunningham. He came from a family of drummers out of South Memphis, Booker T Washington. Anyway, he left and went to Europe and toured with Paul McCartney for a while. That was the original Exotic Movement.

As far as African Jazz Ensemble is concerned, the influence comes from my upbringing and listening to Afro-Caribbean music, African music — Miriam Makeba and Hugh Masekela from South Africa, Guy Warren out of Ghana. That was the music that I was raised up with in my household with my older siblings. You know I'm the youngest of 14, so I was greatly influenced by the music that my older siblings brought into the household. And even when I was doing more popular stuff with Galaxy and everything, that African theme was always there running through.

What are some other influences?

I saw where you recently did a tribute to A Love Supreme. That must have been quite an undertaking.

Yes, that's one of our staples because the whole thing is about presenting love. That's what we do with our music. You know there's an African proverb that says 'music has the power to heal or kill'. That applies to some of this hip hop music today. Even rap originated in Africa. Now rap is being used lately in a negative way. But Skinny Pimp, and some of those original Memphis rappers from back in the day, in the '80s, they're coming around now and doing a positive CD addressing the issue of the violence. And I love that. I'm saying that because we do “A Love Supreme,” and it's just a way to present love, and address the hatred that is happening within the community. I would say both in the black community and in the community at large.

The music is the thing. That's why we open up with that African song, a straight African drum rhythm song, and then we go into “A Love Supreme,” that's our opening. And we get the audience involved with a call and response chant. That's our way of letting people know that's what we're here for.

This is what I tell people. Because of slavery, we couldn't play drums, you know. It was against the law. All this goes back to Haiti, with Toussaint L'Ouverture, where they were using music of African culture and African traditions to lift their spirits to fight their oppressor. So from the slave masters' perspective, anything that was African was suppressed.

That's why that stigma is still embedded in the culture of the South, in terms of the supremacy of the South. That's exactly why I'm doing what I'm doing, because of that mentality. It's time to get rid of that slave mentality. Whether it's white supremacy or black inferiority.

We have to move forward. Sometimes you gotta go backwards to move forward. It's about freedom, the African Jazz Ensemble represents freedom. It's about freeing yourself from what ever cultural bias. It's about freedom and that's what the drums in Africa represent. They represent resisting slavery, about unity, it's about all of those things. Going back to what Coltrane did, songs that he did later on, it was about freeing himself up. That's what it was about. Musical freedom and community and a love supreme. It's for everybody, it's for all ages, all ethnicities. When people hear it and they feel it, it's like 'Wow, so this is what freedom feels like.'