May 06, 2018
comment
Nothing was going to stop the near sellout crowd in Tom Lee Park from having a good time on the second day of the 2018 Beale Street Music Festival.

The day started early for Memphis music fans, with Chinese Connection Dub Embassy and Tav Falco & Panther Burns starting ten minutes apart on two of the festival's three main stages. CCDE greeted the crowds trickling into the park with a strong beat, and they responded with an ecstatic sing along to their song "Heavy Meditation".

We then hoofed it the quarter mile or so to the Bud Light stage where Memphis punk legend Tav Falco was holding court. The current touring incarnation of the immortal Panther Burns is a much tighter and more conventional band than the musical terrorists who set the standard for Midtown punk in early 1980s, but compared to the other acts on offer they were still bracingly raw. Sitting in on keys was Memphis Flyer music editor Alex Greene.

Falco was spry, loose, and utterly confident as he switched freely from shockabilly wildman to tango sophisticate. When he left the stage, the entranced crowd called for an encore, much to the visible consternation of the stage manager who called time as Falco returned for his victory lap. But the beleguared staffer did not know who he was dealing with. He could only look on helplessly as Panther Burns held the stage with a blistering rendition of "New World Order Blues". Falco spit fire, poetically condemning Trump and the current state of America as the crowd egged him on. It was only the second act of the day, but already I had added to my list of all time great Beale Street Music Festival performances.

If the stage manager was worried about Panther Burns putting the show behind schedule, it turned out to be a moot issue, as Mother Nature had the last word. It had been drizzling on and off all morning, but as Calexico was about halfway through their set, more serious weather set in.

We sought shelter in the Beer Garden tent as the rain intensified. Then, a great gust of wind whipped through the park, accompanied by a torrential deluge and, for about five minutes, nickel-sized hail. 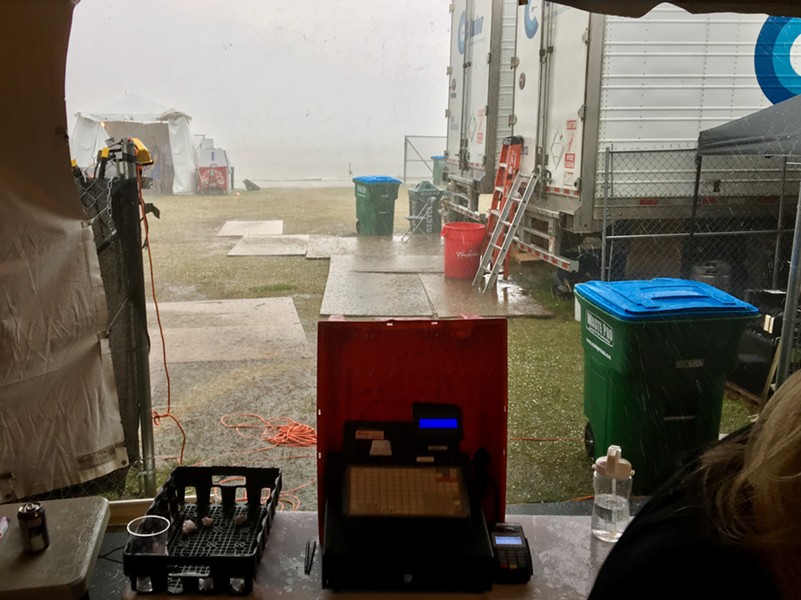 It was a scary few moments as the hail poked holes in the tent where we were sheltered along with several hundred of our fellow festival goers. But just as quickly as the unexpected cell materialized, it dissipated.

Pro Tip: Always wear rain boots to the Beale Street Music Festival, even if it's sunny and dry while you're getting ready that morning. There were quite a few regretful women in sandals and heels getting stuck in the mire for the rest of the evening. But no one who saw Al Kapone and his posse perform as the FedEx stage resumed music was in the least bit regretful. Kapone's set was somewhere between a Memphis music lesson and a pep rally. The climax came when he transitioned from "Hard Out Here For A Pimp" to the other Hustle and Flow hit "Whoop That Trick", which has become something of a rallying cry for the Grizzlies. There were about ten thousand people in front of the stage, and every one of them were pumping their fists in the air.

By late afternoon, the weather radar was clear, and people were streaming into the park in the tens of thousands. As All Time Low took the stage, singer Alex Gaskarth said "Wow, our stuff still works after getting hailed on!" 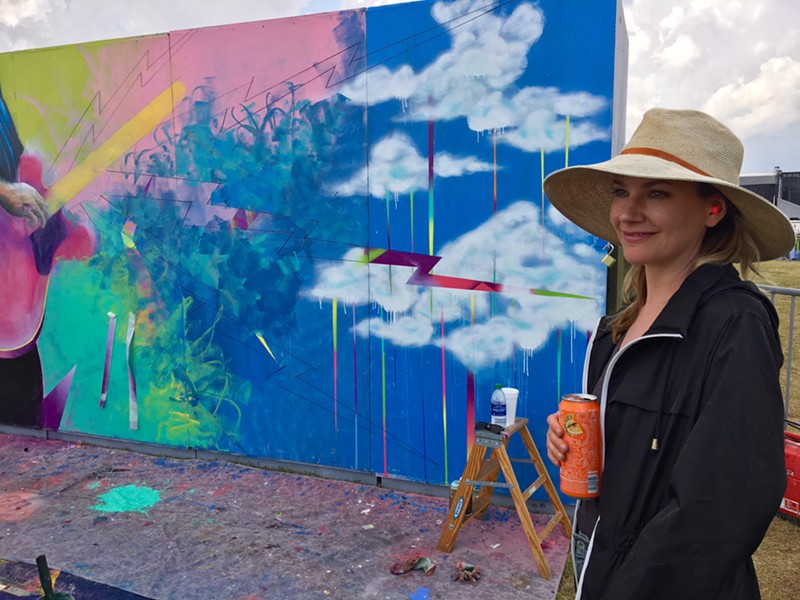 We retired to the Blues Tent to hear Eddy "The Chef" Clearwater and his crack band wail as the sun went down.

By the time David Byrne began his transformative set by sitting at a table and singing a song to a human brain like a postmodern Hamlet, the area in front of the Bud Light stage was packed. Byrne alternated songs from his new album American Utopia with deep cuts from his decades-long career. His twelve-piece band, playing all wireless instruments and featuring a percussion section instead of a single trap drummer, ranged freely across the blank stage, flawlessly executing both intricate choreography and layered experimental funk. New songs like "We Dance Like This" and "Everybody's Coming To My House" took flight when liberated from the studio, and he breathed life into reconfigured classics like "I Zimbra", "The Great Curve", and "This Must Be The Place".

At age 65, Byrne delivered the most radical and visionary performance of the entire festival by completely disregarding the conventions of the rock and pop show and incorporating new elements from Broadway, modern dance, and even marching bands. I hope some of the young performers were watching him burn down the house he helped build.