The Beale Street Music Festival ended on a high note, selling out all tickets by 5 p.m. Final attendance numbers won’t be released until the Annual Report in August; however, organizers say the weekend’s attendees came from all fifty states and twenty foreign countries.

For me, it all started with Valerie June. You could hear her distinctive, keening alto cut through the hubbub of the crowd far upriver of the stage. By virtue of her voice, and her very eclectic material, she was a unique presence on the last day of 2018's festival. On the whole, she conjured up visions of people of the mountains, and the plain-spoken sounds of the Carter Family, even when using her banjo to lead the band through blues grooves that could have sprung out of North Mississippi or West Africa. Once you got close enough to the stage, you could see June herself, a “great speckled bird” in her sequined hot pants, glittering top, and horn-rimmed glasses, as if Minnie Pearl had moved to Paisley Park. It was an inspired set, and a welcome homecoming for June, who began her career in local coffee shops and clubs.

She was clearly delighted to be back. “This song is for Tennessee,” she said before launching into “Tennessee Time,” then dedicated another to “anyone who's ever touched that river, or crossed that river, or been a part of that river.” Local bandleader Hope Clayburn joined in on saxophone, and June's brothers added background harmonies to many songs. The band could certainly groove, which made the set closer, Woody Guthrie's “I Ain't Got No Home in this World Anymore,” all the more powerful by way of contrast.

Unlike Saturday, which briefly endured a downpour and hailstorm, Sunday was idyllic, a smattering of clouds bringing relief to the sunshine and mild heat. It was also agreeably less crowded, making for easy wandering between stages, at least before the headliners got cranked up. I wandered over to another local woman who's making waves, Porcelan. A protege of David Porter's The Consortium MMT organization, Porcelan led a guitarless band through tightly crafted contemporary R&B. The crowd was a tad smaller, but enthusiastic, especially when things heated up with her “I Am the One.” She then noted, “I am a Memphis artist. Memphis may be known for its barbecue, but it's also known for talent. This is for all the Memphis artists who are out there cuttin' it up.” Porcelan was well-prepared to win new fans, instructing the audience to “take those phones out and follow me! I just started my Snapchat!” And while there were some odes to material success (“I need that bacon!” she sang), Porcelan played against the idea with her clever “Goal Digger,” exhorting her man to get with the program, any program.

Wandering deeper into the festival, I came across an odd juxtaposition as I neared the Blues Shack. Jimmy “Duck” Holmes held court there with timeless blues grooves and soulful singing, but the heavily amplified kick drum from the nearby Luke Combs show pounded the air like cannon fire. It was Holmes vs. Combs. Holmes soldiered on, unfazed, and the rapt Blues Shack crowd seemed to collectively erase the competing sounds, and the tips rolled in. From the Bud Light Stage, Combs yelled, “100,000 people on Beale Street is a pretty good time!” and just then, as if in answer, Holmes moaned his verse, “yes, I'm broke,” and drove the riff home.

Eventually, country megastar Combs gave a shout out to Tennessee to tremendous applause, before launching into a country/soul version of “Tennessee Whiskey.” But when he later dove into his hit, “When it Rains it Pours,” the white noise of the cheering crowd was downright deafening. As I wandered back north to catch some of Young Doph's set, I heard one passerby exclaim to a friend, “Wait, you're not drunk yet??”

Memphis' own Love Light Orchestra was rocking the Coca-Cola Blues Tent with some genuine Beale Street sounds: a stomping band with a full horn section recapturing the glory days of big band blues. Singer John Nemeth was ready for anything in his brilliant red jumpsuit. Then I caught some powerful, earthy beats from D.R.A.M. Meanwhile, a man in a “Memphis As Fuck” shirt came gliding by, his bushy beard painted with gold glitter. Perhaps it was a portent of the Flaming Lips.

Ah yes, the Flaming Lips. They did not fail to dazzle. To the art on the sides of the FedEx Stage, they added giant mushrooms. State of the art video visuals flashed behind the band, who, aside from the green wigs sported by the drumming duo of Nick Ley and Matt Duckworth, or a splash of mylar sported by Steven Drozd, were relatively subdued, sartorially-speaking. But lead singer Wayne Coyne was dressed smartly, with blinking bling and an eyepatch, like an ambassador from a Star Trek episode. Coyne and his six companions brought a sound palette as rich as their records, from folk strumming to prog beats, techno zaps and bleeps, and lush, Mellotron-like symphonic harmonies. (Indeed, the progressions and textures realized by Drozd continue to mark the Lips as pioneers of both electronic experimentation and traditional orchestration). Memphian Jake Ingalls played either guitar or sat cross-legged before an array of synths at his feet. Giant pink robots, a mega-rainbow, and Coyne sitting astride a huge neon unicorn were but some of the delights, as beach balls floated and confetti rained down. Early in the set, the phrase “Fuck Yeah Memphis” in larger-than-life inflatable letters was raised onstage. They clearly
have some love for the Bluff City.

As dark settled in, Venus glowing like a beacon above the river, the band launched into David Bowie's “Space Oddity.” Coyne climbed into his “space bubble” and was propelled by dozens of uplifted hands out over the crowd. Ingalls contributed a spot-on lead during the swelling bridge, and the band did Bowie's legacy proud.

After landing back on stage, Coyne spotlighted a youngster in the crowd who'd been sitting atop his parent's shoulders.

He apologized for any anxiety or head-butting that might have occurred during his space bubble foray, but the young lad beamed and signaled that he was okay, to much applause. Indeed, the youngster is the son of Memphis' own Bianca and Graham Burks, the latter being a key player in the city's alternative music scene. 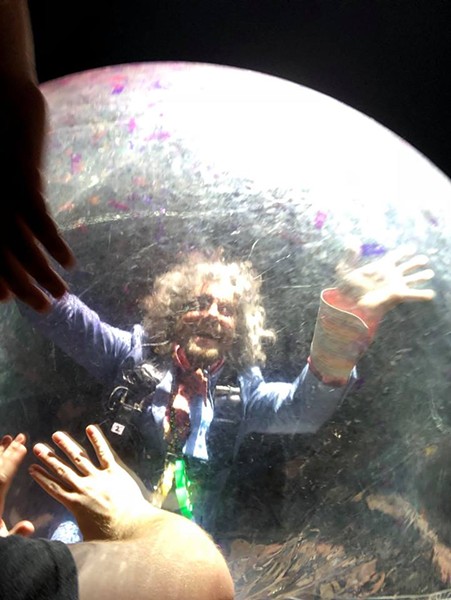 Coyne congratulated them on their parenting skills from the stage.
Generously enough, Coyne mentioned how excited the band was to see Post Malone after their set. And the crowd did seem to swarm en masse over to see the blockbuster singer's show. With an intriguing mix of hip hop, R&B, and echoes of dance hall, Malone had a huge crowd gyrating along. It was stunning, then, to hear him sing a ballad with only acoustic guitar. Despite his down to earth persona, he carried the night like royalty.

But the real royalty was yet to come: the Queen of Neo-Soul, Erykah Badu. Though the crowd grew restless waiting for her to start, even booing an MC who came out to assure us that the queen would appear “in five minutes,” all was forgiven once she hit the stage. Her stage show was not as over-the-top as the Lips', though featuring intriguing images of pyramids and scientific schematics, but her sheer presence, her remarkable voice, and a world class band of jazz/soul players made for a stunning festival capstone.

As she announced, this year marks the 21st anniversary of her album Baduism. “I wrote Baduism for the '90s babies,” she said, referring especially to her son who was born at the time. “Words are not necessary. All the '90s babies know: it's all frequencies and vibrations.” Exhorting the massive audience to raise their hands, she proclaimed, “We've just transcended race.” Then, she explained some of her iconography. “The circle represents the womb. Put your hands on your womb, if you have one. The extended arms represent Fallopian tubes. And the straight line pointing down represents the male principle. Brothers, put your hand on your male principle! Unless a sister already has her hand on your male principle.” As she sang many songs from her breakthrough album of the '90s, half the crowd sang along, word for word. Clearly Badu reigns in the hearts and principles of many a Memphian.