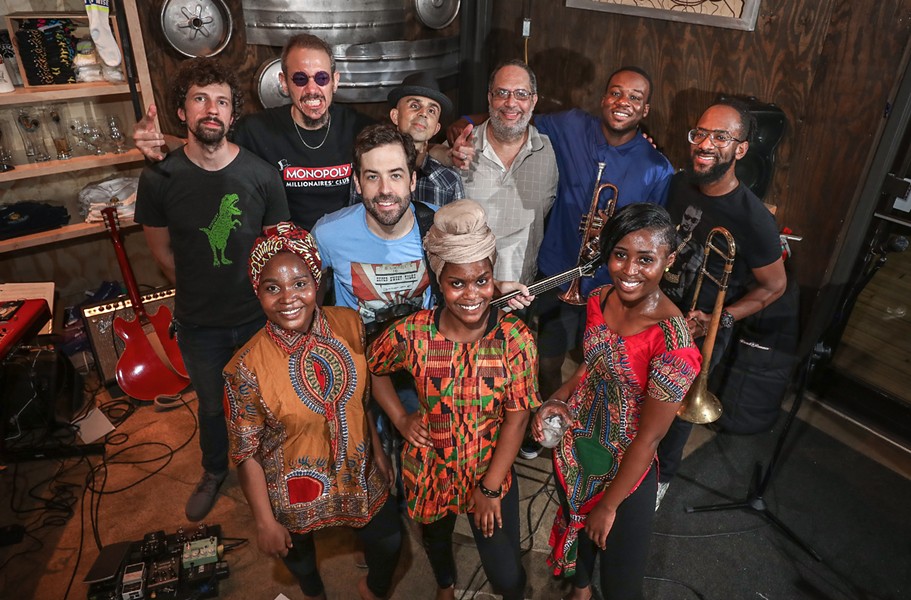 One night this summer, with some time to kill, I dropped in to the Wiseacre Brewing Company on Broad Avenue. Walking across the parking lot, I heard grooves not often played in our neck of the woods, and opening the door to the bar, the music suddenly springing into the night, only confirmed that we weren't in West Tennessee anymore. It had to be West Africa.

Filling the room were the sounds of an ace Ghanian highlife band. The band was collaborating that night with dancers who sang along with many of the classic highlife numbers. Hypnotic, joyous guitar arpeggios shimmered over fiercely syncopated beats — this was the real deal! But scanning the players, I saw only familiar faces from other combos around town.

The Obruni Dance Band is indeed comprised of local talent. And, given that many American fans have had African music on their radars since the 1960s, it shouldn't come as a surprise that enough Memphis musicians were big enough fans to eventually create their own band. Here, along with a slideshow using Jamie Harmon's images of the show I chanced upon that night in July, are the details of how that happened. I asked Obruni's founder and lead singer, Adam Holton, about the origins of his interest and what his vision for the group might be.

Memphis Flyer: How did you first get into highlife music, and how deep did you go with it?

Adam Holton: I’m from Memphis and I first learned about highlife and other types of Afro-pop when I was in school at University of Colorado, Boulder. There was an ethnomusicology professor from Ghana named Kwasi Ampene who had a “West African Highlife Ensemble”. I went to see a performance of theirs, and I was blown away by this huge ensemble of 20+ musicians, dancers, and drummers playing this infectious dance music with killer bass lines! I joined the group the next semester and stayed in the group under Kwasi’s leadership until after I graduated. I traveled with Kwasi to Ghana as a part of a study abroad program, and got to sit in a few times at clubs in Accra. I also took some bass lessons from Ralph Karikari, a killer highlife bassist and guitarist who is famous for his role in Dr. K. Gyasi’s Noble Kings band.

It sounds like Boulder must have quite an Afro-pop scene.

The West African Highlife Ensemble would invite guest artists each year for a big performance, and through these special performances I got to back up some heavy hitters including Mac Tontoh of Osibisa, Okyerema Asante, and Paa Kow. Paa Kow is a drum prodigy who was playing professionally before he was a teenager, and he and I started the By All Means Band together in Colorado, playing Afro-funk-fusion. We eventually moved to Memphis in 2007 and played here for a little more than a year before breaking up.

Where did you go from there?

I went in other musical directions with other musical projects (Mister Adams, Big Barton) just following my muse where it wanted to go. Some time in 2016 (about seven or eight years after the band broke up), I kind of looked up and realized that this music that I had devoted many years of my life to learning and playing was no longer a part of my life, and I missed it terribly! No one in town was really doing the Afro-pop thing, so I decided to start a new band. Initially, I tried to find any West African musicians who might be in the area, but to date I haven’t had any success with that. So I just started calling on players who had some world music experience or who have jazz backgrounds and can really play just about anything you throw at them.

Obruni means foreigner in the Akan language of Twi. As a white American in Ghana, you’re kind of a sore thumb, so strangers will playfully call you Obruni as you pass them in the street or markets. I decided to name the band Obruni Dance Band because I figured American audiences wouldn’t know what it meant, and I thought that it would be kind of an inside joke to Ghanaians who would immediately know that the band wasn’t from Ghana. Highlife bands are often really large by comparison to rock bands, which translates to a lot of concentrated human energy during performances. The band started with five members (Logan Hanna, Stephen Chopek, Felix Hernandez, Gerald Stephens, and myself), but we have since added Victor Sawyer and Jawaun Crawford on trombone and trumpet.

So does the band mainly play classic highlife music, or do you write originals in that style?

Right now Obruni plays about 50/50 original music versus covers. We are somewhat limited in the covers that we can do because I am by no means a fluent Twi speaker, and so I mostly focus on songs that are sung in pidgin English. Sometimes, I take a popular rock song, and give it a heavy highlife makeover so that pretty much no one would ever recognize it. We do songs by The Beatles, Nirvana, Dire Straits, and Warren Zevon alongside songs by Osibisa, Prince Nico Mbarga, The Sweet Talks, and George Darko. 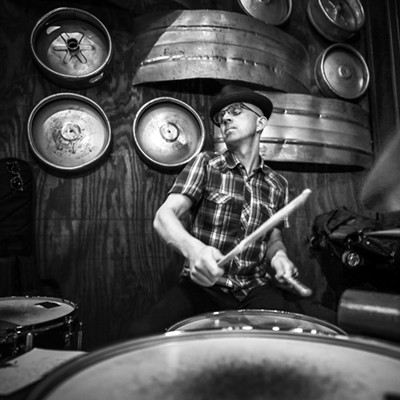