Jay Vance wishes he was made of steel. At least that's the implication of his adopted stage name, Jbot. But maybe that's the Stockholm Syndrome talking. Just look at the photo: He's obviously not in his happy place, having been captured by robots and all. But when Captured! By Robots play, who cares? We need only experience the beautiful music they make together.

They'll be playing Murphy's tonight, and you can hear their trademark speed metal and grindcore for yourself. Lest you think this is a joke, I quote the band's official bio: 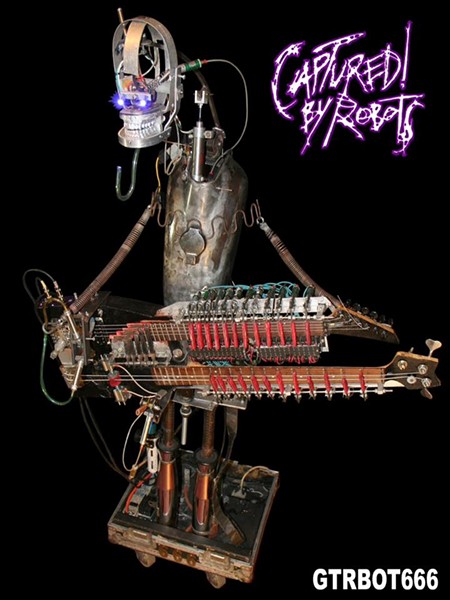 "Captured! By Robots released its first album in 1997, and over the past two decades, Jbot has fine-tuned his metallic bandmates GTRBOT666 and DRMBOT0110 to the point of mechanized perfection. The method to the madness is derived from a series of computers which activate air valves that allow compressed air to pour through in controlled bursts. Those blasts push and pull the mechanical fingers that hit guitar frets and sticks that crash into snare drums. Pneumatics also power the robots' movement, giving them a disturbingly human sway."

In short, this human, in an attempt to make his own band, created the robots. Instead of following him, they revolted, and now force him to travel the world with them, performing music and making him contemplate the inferiority of the human race.


Still I wanted to hear the human angle on all this. I contacted Jbot to see how the music reflects his heart, his soul.

Memphis Flyer: Hello Jay! I couldn't ask this of a robot, but how are you feeling?
Jbot: I'm having a very bad morning. Hope you're doing better than me.

But you're doing what you love!
All the music is played by the bots. They're total dicks.

But they sound like the perfect band mates. You can just turn them off.
Twenty years touring with a robot band has taught me a few things. Most importantly that the human race as a whole is totally f*%ked, and we ALL deserve to be wiped off the Earth like the scum that we are.

At this point, I slowly backed away from the computer and ran out of the house. Clearly he's internalized the robots' message. Perhaps he thinks he is one of them. Let's find out if there's any humanity left in this band. Indeed, human drummers who are game can go toe to toe with DRMBOT0110 in a live competition. And did I mention that the openers will be the River City Tanlines and the Hosoi Bros? Not to be missed!