November 26, 2018
comment
Some 14 years ago, Elvis Costello endeared himself to many Memphians while in Mississippi to record The Delivery Man. Of course, his fans were already legion here, but this was when he had time to kill, and he killed it with many locals. I was a lucky hanger-on backstage at the old Hi-Tone, when the late, great B.B. Cunningham met with him and recalled their first encounter many years earlier. "Of course," said Cunningham, "we were both a little skinnier back then..."

"Oh that's all right, though," said Costello, beating his chest a little, "we're just getting up to fighting weight now!" It struck me then that this icon of gangly nerds the world over was actually pretty tough; I could easily picture him holding his own in a scrap down 'round the pub.

I thought of those days as he took to the stage with the Imposters once again last Monday night. The band threw us off briefly, with a feint in the direction of canned rhythm tracks as they took the stage; but soon they launched into a ferocious "This Year's Girl" and it was clear that the Imposters were fully engaged. And Elvis was clearly up to fighting weight, looking more nonchalant than in previous shows, but entirely committed once he approached the mic.

From the start, it was clear that the band (with Kitten Kuroi and Briana Lee on background vocals, Davey Faragher on bass, Steve Nieve on keys, and Pete Thomas on drums) would need every ounce of tenacity they had to overcome the audio mix. As many touring musicians know, live sound engineers are often fixated on the kick drum, and this night was a classic example. It was so loud and boomy that it muddied every other sound on stage, even to the point of obscuring the actual bass notes. This was a sticking point for many music-savvy Memphians, as I discovered in the days the followed. One man was escorted out of the hall for shouting at the sound engineer. Another claimed he was nearly moved to violence over it, noting the hundreds of dollars he and his wife had spent on a gala "date night" that, for them, was compromised.

But the band rose above the atrocious mix with road-seasoned professionalism, and Elvis' vocals punched through the booming crud of low frequencies. Though the machine-gun lyrics of some of his earlier songs were a challenge to keep up with, Costello never phoned it in. Every word was loaded with nuanced meanings, even more so than in his brutal youth.

Steve Nieve and Pete Thomas, with Costello for some 40 years now, were also all-in. Nieve, surrounded with every conceivable keyboard, as if to compensate for his early years with only a Vox Continental organ, made his entire armory sparkle. "Clubland" shone with his brilliant piano work in a Cuban vein. All eras of music were up for grabs with this band.

This was especially clear when Costello stepped over to a vintage (looking) microphone for the quieter, slower ballads, somehow evoking his own father's tenure with the Joe Loss Orchestra. As Elvis the Storyteller emerged, many of these tunes were set up with a preamble of sorts. "Imagine a woman sitting there, wrapped in the fur of another animal..." he said before launching into "Don't Look Now," one of many he's penned with Burt Bacharach. "Sometimes you have to put people up on a pedestal, just to see them more clearly," he said, adding, "until, like a Confederate General, they come tumbling down." As an appreciative gasp of recognition went through the crowd, he quipped with faux coyness, "Aw, I didn't mean anything by it!"

Bacharach loomed large over the night, partly because the ballads were so strong, unhampered by the kick drum. But also because old songs were transformed in his image. As the band vamped in a quieter mode, Elvis freestyled lyrics from "The Look of Love," before launching into "Photographs Can Lie," another collaboration between the two. This in turn colored "Temptation," a number from Get Happy! that has aged well.

That was nothing compared to the next transformation. "I wrote this when I was 26," Elvis explained with a smile. "The world wasn't ready for it then, but I think I can safely say, you've all caught up. It's written on every tortured line on your faces." (Or something to that effect.) And then a somber reading of Imperial Bedroom's "Tears Before Bedtime" emerged, with a stately, quiet power.

The set, ranging from such moments to ravers from his back catalog, was a roller coaster. The background singers, Kuroi and Lee, were phenomenal, especially on the ballads. To these ears, they may have been too much of a good thing on old rockers like "Mystery Dance," the essence of which lives in its stark raggedness. One longtime fan was more dismissive. "Elvis Costello and Dawn!" he quipped; but others were deeply moved by their powerful voices, which even graced the classic "Alison" with gospel-like melisma.

Such quibbles aside, Costello & company whipped the crowd into a frenzy by the night's end, pulling everyone out of their seats with set-closer "Pump It Up," and keeping them aloft through a generous 10-song encore that culminated in a rousing "(What's So Funny 'Bout) Peace, Love, and Understanding." "Thank you! We love you!" Elvis shouted. "Both individually and as a group!"

Set List:
This Year's Girl
Honey, Are You Straight or Are You Blind?
Clubland
Don't Look Now
Burnt Sugar is So Bitter
Green Shirt
The Look of Love/Photographs Can Lie
Temptation
Tears Before Bedtime
Moods for Moderns
Why Won't Heaven Help Me?
Either Side of the Same Town
Watching the Detectives
Deep Dark Truthful Mirror
He's Given Me Things
Mystery Dance
Waiting for the End of the World
Beyond Belief
Pump It Up

[Encore]
Alison
Every Day I Write the Book
The Judgement
I Can't Stand Up for Falling Down
High Fidelity
Unwanted Number
Suspect My Tears
(I Don't Want to Go To) Chelsea
Mr. and Mrs. Hush
(What's So Funny 'Bout) Peace, Love, & Understanding

See the show via the eye of Jamie Harmon, in the slideshow below:

Slideshow Elvis Costello & the Imposters at the Orpheum 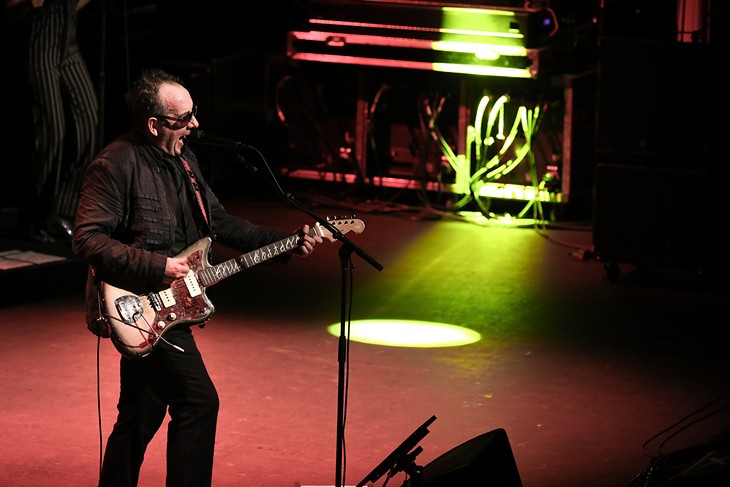 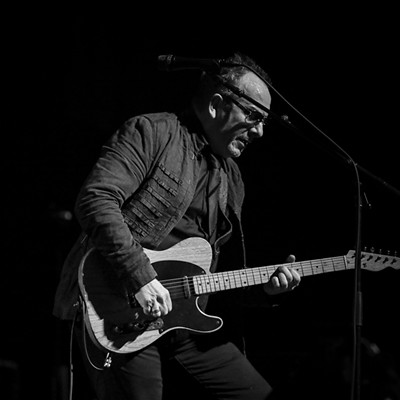 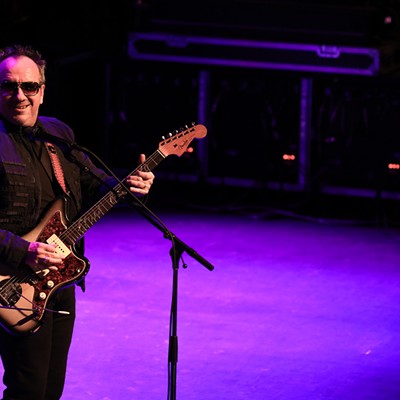 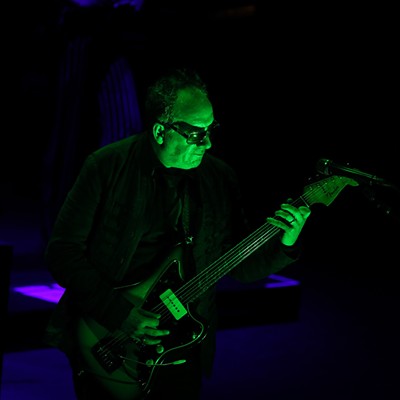