The first Friday of Memphis in May, my wife Laura Jean and I worked through lunch creating piping fresh content for your eye- and ear-holes. Starving, we hit the South gate of the festival a little after it opened at 5 PM, intending to fuel up on carnival food before the music got started.

Like everything else, the food at Tom Lee Park has evolved over the years. What used to be a funnel cake and pronto pup stand is now several funnel cake and pronto pup stands placed strategically around the festival grounds. But there’s a lot more than that, of course. The addition of the noodle stand about a decade ago was a great leap forward for handheld cuisine, and heralded an explosion of speciality vittles like biscuit sandwiches. Now there’s enough variety to make the Iowa State Fair envious. 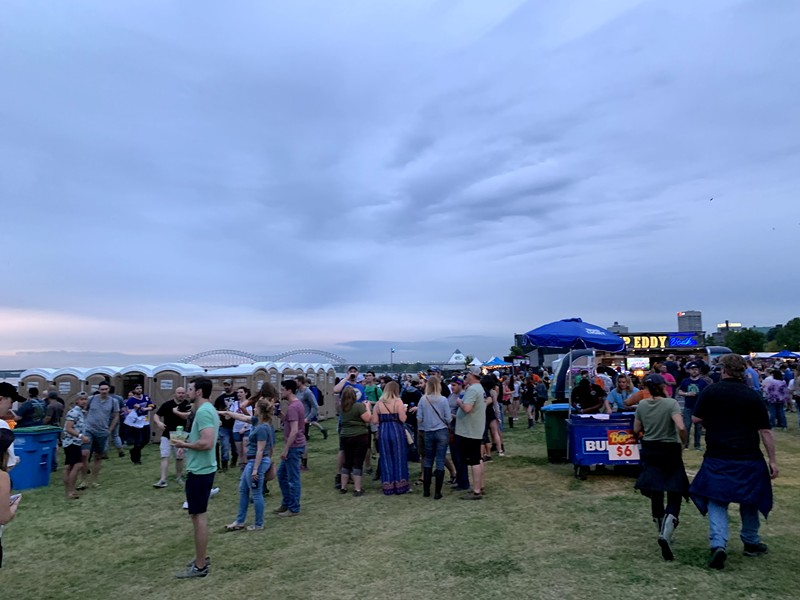 The sky Friday night was not the most beautiful in the history of Memphis in May, but the conditions on the ground at Tom Lee were darn near perfect—not too hot, not too cold, no blistering sun. There was plenty of live grass, and our rain boots were not sinking into the muck yet. At our first stop, I ordered a small beer and got served a large, which I took as a good omen. But no one had run power to any of the beverage stands yet, so it was cash only. Then we grabbed some fish and fried-avocado tacos and settled into a picnic table for a mini feast. As we sat there, we watched the first big wave of people wash towards the stage.

Debate is currently raging over the future of Memphis in May in Tom Lee Park. It must be noted that the MiM folks have perfected the Beale Street Music Festival layout. In the big picture of music festivals, BSMF is one of the most accessible and easy to navigate. With the notable and lamentable exception of the Blues Tent, the problems of sonic bleed that plague festivals like Bonnaroo are nonexistent. When Orange County’s Dirty Heads got rolling at 6:20, the bass was shaking tents hundreds of feet from the Terminix Stage. But when we headed north to the FedEx Stage to check out Ravyn Lenae, we stepped into a new sonic environment.

Lenae, and R&B singer from Chicago blessed with legs for miles, towered above the crowd. Her mezzo soprano voice floated comfortably in an upper register unreachable by most pop songstresses.

Continuing north, we ended up at the Coca-Cola Blues Tent, where Brandon Santini and his band were absolutely tearing it up as the crowd filled in. Here’s a BSMF ProTip: when you need a break from the heat or to sit down for a minute, go to the Blues Tent. The music is always at least competent, and usually great. Sometimes, as with Santini on Friday, you can watch an act having the night of their lives while you catch your breath.

Heading back down South, we arrived just in time to watch the biggest party of the night break out. BlocBoy JB, the Memphis rapper whose “Look Alive” was a huge hit last year, almost missed the festival after an MPD traffic stop found him with weed and a firearm. Fresh out of 201, the lithe MC had what looked like half the crowd on stage with him three songs in. Thousands bounced along as clouds of cannabis smoke ascended to heaven.

As a side note, way too many of y'all are mixing your cannabis with tobacco. I’m not talking about rolling a blunt with a cigar paper, which is a time-honored and practical method. I’m talking about actually rolling tobacco into your joints. This is an abomination—what the late, great Memphis music producer Jim Dickinson would have called a “decadent European practice”. Have some self-respect and smoke your weed pure like Jah intended. 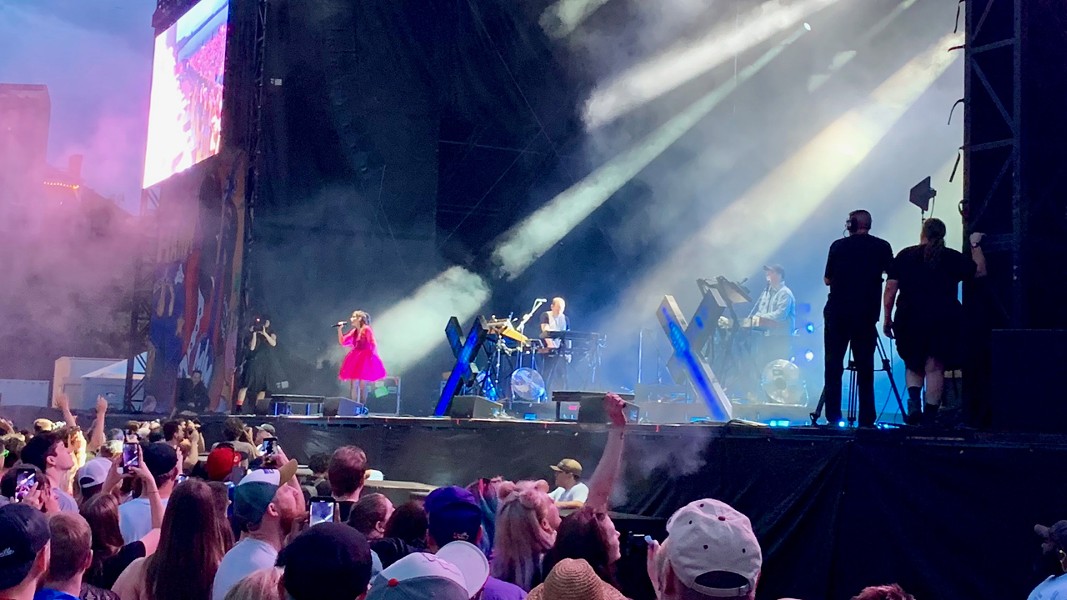 We returned to the Terminix stage for Chvrches. It was the last night of the tour for the Glasgow, Scotland, band, and they left it all on the stage. Singer Lauren Mayberry is pint-sized, even in platform shoes, but she radiates confidence and can work a crowd with the best of them. Swirling in a pink tutu, she and her bandmates Iain Cook and Martin Doherty breathed life into their deep catalog of warm synthpop. Halfway through the set, Mayberry paused to point out a nearby funnel cake stand and tell the story of puking into a trash bin the first time she ever tried one of the fried dough pastries. Nevertheless, she said, she would probably have one again, “after I get this tutu off.”

It was a low-impact and fun Friday night. As Chvrches packed up, a wave of Dave Matthews fans descended on the stage like the undead at Winterfell. Having had our fill of Matthews’ jam-lite stylings in the 1990s, we briefly debated trying to fight the tide of baseball caps fetishists to get to Khalid before deciding to ride the wave out of the South gate. Another ProTip: The Lyft pickup area on Kansas street is the quickest way out of the festival area, and they’ve even got a promo code for free rides, courtesy of Bud Light. So use it, and be safe out there, y’all.