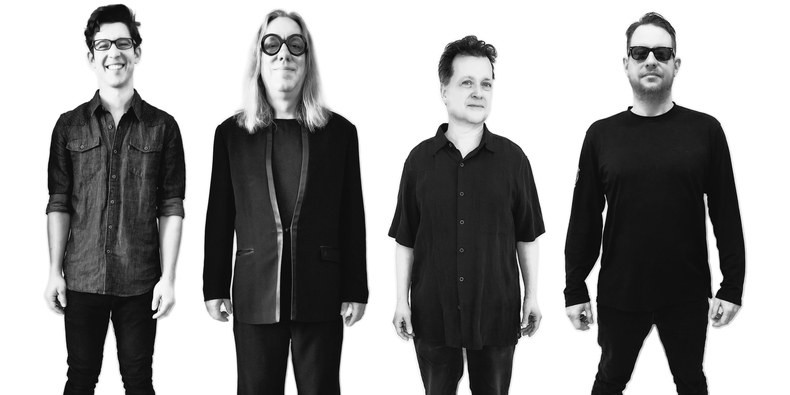 That’s the opening line from “Hotel Last Resort," the title track from the new album by the Violent Femmes. The band, which formed in a Milwaukee suburb in 1981, became one of the biggest and most enduring acts to come out of the post-punk period. But unlike most of their counterparts, like American bands Husker Du and The Replacements, who formed in the Midwest around the same time, they weren’t playing electric guitars fast and loud. The ramshackle Femmes always sounded like they had just wandered in off the street, where they had been playing for change. This is pretty close to being the truth, as their big break came when The Pretenders saw them busking outside a Milwaukee theater and asked them to open the show.

Even though their air of studied amateurism attracted the cult around the band, the awkward teenagers were always looking toward the future. “I was fully committed to it being a career. Completely,” says singer and songwriter Gordon Gano. “That’s how I felt, and that’s how Brian Ritchie felt before we met.”

That ambition almost cratered the band before they even got started.“When we were first playing together, in the beginning of 1981, Brian and Victor DiLorenzo, our original drummer, were planning on moving to Minneapolis the next summer to start a band with people they knew there. They told me, this is fun, but that at the end of the summer they were leaving. This thing that we were doing, them playing my songs with me, was going to end at the end of the summer. Then, something happened with the people in Minneapolis. Without that, this thing called the Violent Femmes wouldn’t have happened beyond the summer of ’81. There would have been no recordings or anything,” says Gano. “We were all feeling really good about the music we were making together. It had a nice energy which we all thought was great, even though no one else did at the time.”

As punk got more “pure,” Gano’s songwriting got more eclectic, incorporating folk, country, and whatever else he was listening to at the time. With lyrics dripping with teenage sexual frustration and anchored by the frantic standup bass work of Brian Ritchie, their immortal single “Blister In The Sun” sounded like nothing else on the radio in 1982, or even a decade later.

“There were a few people who liked it, loved it,” says Gano about their proto-folk-punk sound. “But most people didn’t know what to do with it. They just wanted us to go away. We’ve run into that our whole career, people who would be much happier if we just didn’t exist. I think the reason they’re like that is, the people who are supposed to be in the know, the people who are in the music business, from the very start told us we weren’t any good. I think those people are still around, and still exist. Basically, we shouldn’t be as popular or successful as we’ve been, according to this certain view of things in the industry.”

The Femmes have endured turmoil, ridicule, and lineup changes, beginning with a brief breakup in 1987 after the difficult recording of The Blind Leading The Naked with producer and former Talking Head Jerry Harrison — even though that album was their first entry into the Billboard charts and spawned a hit with their cover of T. Rex's "Children Of The Revolution".

"That one was the worst time of what was going on in the band itself," Gano recalls. "There were a lot of difficult circumstances. We were doing a lot of new stuff in the studio, with Jerry Harrison producing. It was the album which gives me the least enjoyment when I’ve heard it. But I probably can’t completely separate that from the experience of making the album. … I think with music, it’s so much about when you hear it. What’s going on in your life? How old are they? It’s impossible to hear music separate from what’s going on in one’s own life.”

Perhaps that can explain the Femmes’ enduring popularity. Gano’s compositions like the snarling “Add It Up” and the bitter breakup song “Nightmares” speak to people when they’re feeling awkward, alone, and also a little defiant. Everyone goes through a Femmes phase. “We thought we’d be either less popular than we’ve been for all these years, or more popular. We had no lack of ego in thinking about how well we play the music we play. All we knew about was the punk music we were into. You’d play the little punk rock clubs, and then you got really big. That was making it. The other end was the Beatles, The Rolling Stones, Pink Floyd, and so on. There wasn’t anything in our mind in between. But that’s where we’ve had our whole career — the in-between area. And yet the longer we keep doing it, the closer we get to the Stone camp, in our little tiny way. We’re starting to put some years in. Certainly, we never thought about the number of years we’d be doing it. We’ve been playing music now longer than rock-and-roll had existed when we started playing. I can’t even really fully comprehend that. Time is … a subject we probably shouldn’t start talking about.”

When the Violent Femmes hit the Graceland Soundstage on Thursday, May 16th, it will be part of their ongoing tour with fellow old school punkers X. “We’re getting great reactions from people. We’re playing with X, which is a very fun double bill. I think it’s a great show, particularly with two bands accustomed to being a headliner. It’s been great.”
The new album Hotel Last Resort will be released in July. “I’m really happy with it. I suppose a lot of artists say ‘It’s some of our best stuff,’ so I’m trying not to say that,” says Gano.

But don’t you really think it is, I ask? “It is! It’s exceptionally fine craftsmanship for us!”