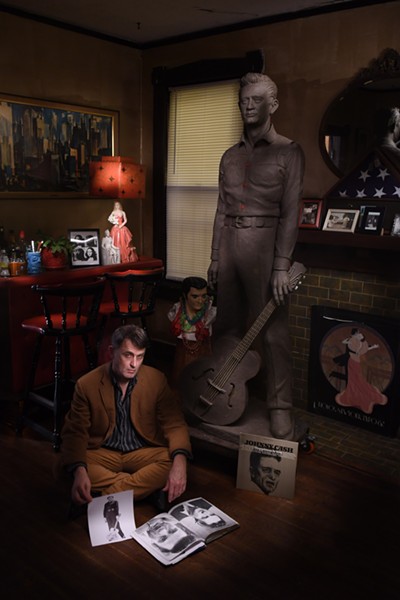 Wednesday, June 12 at 5:00, Memphis will finally behold the culmination of years of planning and painstaking work, with the unveiling of a statue of a young Johnny Cash. The larger-than-life likeness at 999 South Cooper will stand only a few feet from where Cash played his first paid performance at Galloway Church with Luther Perkins and Marshall Grant in December, 1954.

I spoke with Mike McCarthy, better known for his underground comics and films, about the process of making his original vision a reality, and his experience with working in the new medium of sculpted clay.

Memphis Flyer: How did this all come about? Many people don't even realize that Johnny Cash played at what was then called Galloway Church.

Mike McCarthy:  So seven years ago, I thought to myself, 'Cooper-Young needs a Johnny Cash statue. And Galloway Church needs to be saved.' Then I met this strange cast of characters that took me on this journey that, seven years later, amounts to a statue.  I'm extremely happy. And maybe I'm amazed, to quote Paul McCartney. Because I can't believe that it actually happened. These things take time. At one point, we were in a moment of crisis where, if I didn't do the sculpture myself, it wasn't gonna happen. And frankly it was an honor and a privilege, and I would have done it for free. Many people don't even know I did it. They think I'm affiliated with it, but they don't understand that I actually sculpted it. At the end of the conversation, they're like 'Wait a second, you actually sculpted it?'

I have said that Memphis is under-statued. And it's becoming more under-statued. So why don't we replace these statues or create new statues that are rockabilly-oriented, blues-oriented, 70s rock-oriented. Create an entire milieu of Memphis music history with statues, so American Dream Safari, say, can drive by that. We need more statues of historical musical legends in Memphis. That's why I helped start Legacy Memphis. Then, when I became the sculptor, I stepped down from that nonprofit. From the beginning, our motto was 'Every neighborhood has a hero.'

You usually work in other media. How did you rise to the challenge of sculpting?

Thirty-five years ago, I had a sculpture class at the [then] Academy of Art with John McIntire, and you can read about him in Robert Gordon's It Came From Memphis. After I read that book, it all made sense to me, the beauty of the man who is John McIntire. When you move here from Mississippi to do your thing, you'd be best off just being quiet and soaking it all in, and go ahead and do whatever someone like McIntire says.

So I had that experience, and I knew I was up to the task of this project. I sculpted it in oil-based clay in my living room for about ten months. It was here in my house over Christmas. We strung Christmas lights on it. For me, having a piece of public artwork that supersedes anything I thought I would ever be able to accomplish, after coming from film and comics and other underground things I've done, is very gratifying.

I tend to be very philosophical about these things. Having something that was spawned out of my living room, that my kids were around and watched take shape, and can still go see after I'm gone, is wonderful. They'll always be able to drive by that statue, and that means a lot.

How did things proceed once you finished the clay sculpture?

Then it was cast into bronze at the Lugar Foundry. One of the nicest things to occur out of all this is my friendship with the Lugar family, with Andrea and Larry. I'm sure the Flyer readership is very familiar with their statues: Chief Seattle at the zoo, Bobby Blue Bland downtown by the Chisca Hotel, Elvis on Beale Street. When I went out to see the statue at the foundry in Eads the other day, I was extremely gratified. I'm very happy to have worked with all these people to have made this happen.