From Continuum Fest to A Change of Tone, Crosstown Keeps It Edgy 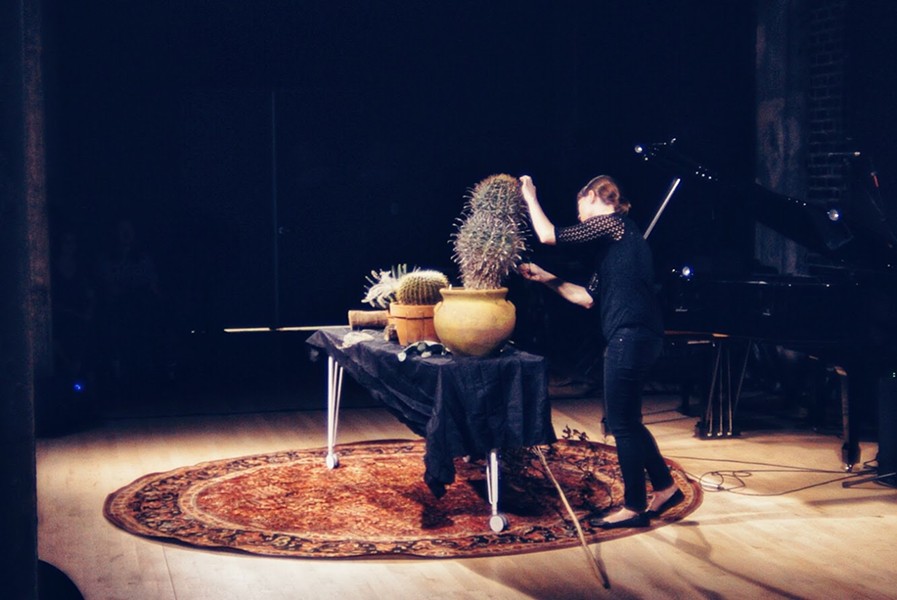 While several cities have renovated former Sears, Roebuck & Company warehouses/retail centers, including Minneapolis, Atlanta and Boston, Memphis' own Crosstown Concourse may take the cake in terms of grounding such projects in community art projects and concerts. And, far from curating softball 'pops' concerts and blockbuster movies, Crosstown Arts, the nonprofit that jump started the local Sears building's revitalization in 2010, has kept the "urban" in its original vision of a "mixed-used vertical urban village."

In this context, urban means bringing to Midtown the kind of pioneering music that one might find at world-class halls like the Brooklyn Academy of Music (BAM) or C4 Atlanta’s FUSE Arts Center.  With three venues, an artist fellowship program, a recording studio, a music film series, and other resources for local and international musicians (and other artists), Crosstown Arts has become one of the nation's premier centers of innovation.

Case in point: the upcoming Continuum Music Festival, now in its third year, which, in hosting events in the Crosstown Theater, the Green Room, and the East Atrium Stage, may make the fullest use yet of all the old retail center's environs. As a festival of new sounds, from experimental to electronic, classical to multimedia, Continuum is beyond most precedents in the local scene. Headlining is Project Logic, featuring local bass wunderkind MonoNeon, guitar virtuoso Vernon Reid (Living Colour), and drummer Daru Jones. The festival also features Opera Memphis' staging of the transgender-themed work As One, a chamber opera created by Laura Kaminsky, Mark Campbell, and Kimberly Reed.


The kick-off show on Thursday, August 15th features the Blueshift Ensemble playing compositions by longtime collaborators from the ICEBERG New Music collective and is to be held at Crosstown Brewing Company.The festival will also feature a Duet for Theremin and Lap Steel, a concert by multi-instrumentalist New Memphis Colorways, and a performance of Sarah Hennies' 'The Reinvention of Romance' by Two Way Street.

Finally, like any good gathering of the tribes, there will be many interactive workshops and talks: Sweet Soul Restorative (Yoga with Live Music); The Quest for the Perfect Pop Song; The Metaphysics of Sound; Sheltering Voices: Impactful Community Storytelling; Breaking Boundaries: The Music of ShoutHouse; and The Sounds of 'Starry Night:' Writing Music to Van Gogh's Masterpiece.

But Continuum is really only among many examples of the cutting edge curation of the Crosstown Concourse space going on now. In addition to last year's Mellotron Variations or this spring's Memphis Concrète electronic music festival, more ideas are percolating in the wings. For example, musical artists who are pushing the very boundaries of how concerts are experienced will be featured in next spring's A Change of Tone concerts.

Four such shows are planned for April 18th-21st, 2020, but we don't yet know what we'll hear. Musicians of any genre are applying to be featured as we go to press, and may do so until September 10th of this year. Click here to submit a proposal.

One thing they all will have in common is thinking outside of the music box, or rather, outside of the venue. Subtitled "In/Out of Sync," the concerts will be organized around a weirdly specific, yet open ended theme: Musicians will “exhibit” their music for a listening audience over loudspeakers in one venue as they simultaneously perform it in another, creating a non-traditional listening experience.

With a live-feeds between The Green Room music venue and Crosstown Theater, audio from the latter will be piped over to the audience in The Green Room to listen to, as the musicians, out of sight, perform their original work live in the otherwise empty Crosstown Theater auditorium. The second feed will video-capture The Green Room audience for the performing musicians in the theater to see on a screen, so that they may virtually watch their audience as they play. With such technological feats, concert organizers hope the performers "might achieve a vivid and seemingly living omnipresence." As the organizers further expound:

Similar to the experience of being inside of a haunted house or abandoned building, this spectral approach to auditory perception will be, among other things, a sonic experiment in vulnerability. It will be an attempt to enhance and heighten the audio-sensory experience for the listener, and perhaps will intensify the presence and impact that music can have when our fight-or-flight response is instinctively activated, giving the sounds we hear the power to demand our full attention.

It's an embarrassment of riches, really, for those hoping to reimagine their sonic art. In fact, the many series at the Concourse may be remaking the musical arts as Crosstown Arts remade the empty shell of an abandoned retail center only a few short years ago.