Looking Back at the Continuum Music Festival 2019 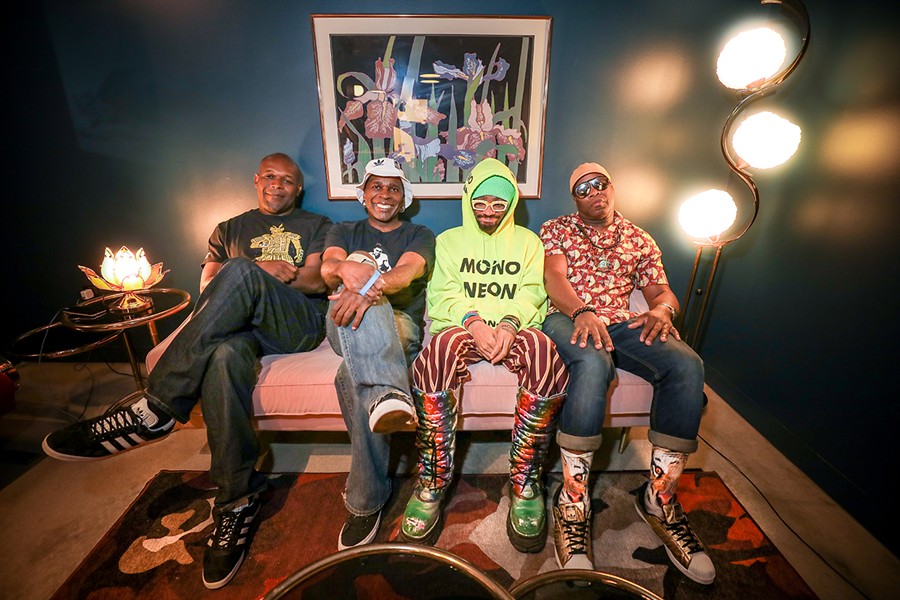 The Continuum Music Festival has come and gone once again, leaving many reeling from over two solid days of innovative sounds. Here, we present a slideshow of some highlights, by photographers Jamie Harmon and Jillian Baron.

Your faithful correspondent was able to witness one highlight of the weekend, Opera Memphis' staging of the modern opera As One, by composer Laura Kaminsky and librettists Kimberly Reed and Mark Campbell. Since its premier in 2014, this has become the most produced new opera in North America, and upon seeing the performance at Continuum, it was easy to see why.

Featuring Blythe Gaissert, mezzo-soprano, and Michael Kelly, baritone, singing with the  Blueshift Ensemble String Quartet (Marisa Polesky, Jessie Munson, Beth Luscombe, Alisa Horn), the piece tells a heart-wrenching saga of a transgender person grappling with her identity. The two singers orbit around each other throughout, each furthering the tale of a young boy's struggle with, and gradual acceptance of, his often secret female identity. The effect of the two singers inhabiting different aspects of one life is indescribably captivating; coupled with the string quartet, it is gripping.

The music ranges from the hypnotic or pastoral pulses of childhood, to ever more strident and dissonant harmonies as the dual protagonist, Hannah after and Hannah before, confronts misunderstanding and threats from the world at large.

Paul Taylor: There was a restorative yoga thing led by Sean Murphy and Anne Froning. That was a nice addition to both days. Sean does a really interesting looping with a bunch of wind instruments and delay pedals. Pretty cool.

The Theremin-Lap Steel duo was super beautiful and tranquil. It was really refreshing and surprising. They took it in a direction that was totally not directly linked to the expected sounds of those instruments.

Then I played my set, which was a re-imagining of my New Memphis Colorways Vignettes. That's a project I'm doing on social media this year, releasing little 60-second video clips that are intended to exist only on social media. They're not advertisements for anything else. They've just reached their destination and I'm done with it when they wind up on social media, as art intended to live there.

But I decided, for this show, to reanimate them into longer versions by mapping out sections of each of the videos to a MIDI controller, so I could trigger start points in the video and audio in each of them, and spontaneously improvise longer compositions. And that sort of created new chord changes and beats by utilizing different start points as they were not originally intended to be. And I think I survived relatively unscathed.

Directly after me it was the Blueshift Ensemble playing music by ICEBERG. And the pieces they played were just astonishing. I was absolutely blown away at the breadth and scope of those tunes. They're really challenging, they're really enlightening.

And after that was Project Logic. That was a really interesting show, in that I think a lot of people expected Vernon Reid to just be a shredder, which he is, but man, he was playing the holy hell out of funky neo-soul repetitive groove guitar, and those guys were in a trance for, like, two hours straight. They had the audience completely entranced. And the venue and lights were fantastic. 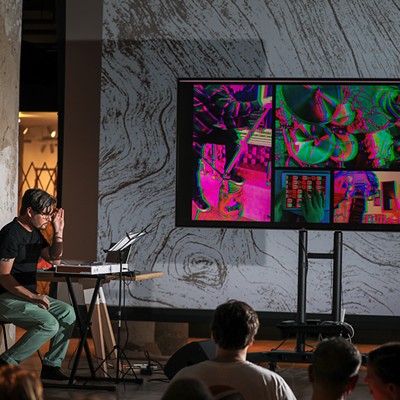 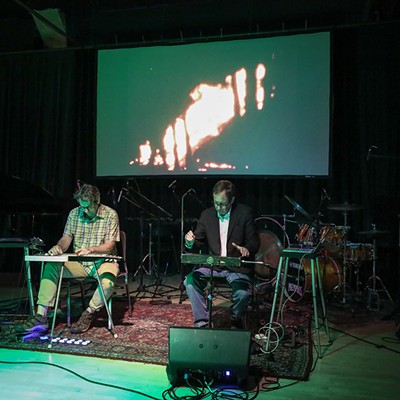