Alex da Ponte's This Is Ours

After making her start with indie band Yeah, Arturo, Memphis-based songwriter Alex da Ponte released her first solo album, Nightmares, in 2012. Since then, she has remained an active member of the Memphis music scene, releasing new albums every few years, like clockwork. She released her newest album, This Is Ours, recorded at High/Low Recording with Toby Vest and Pete Matthews, in July of 2019.

Memphis Flyer: You’ve been active in the Memphis music scene — and pretty regularly releasing new music — for a while. Has your relationship to making music changed over time?

Alex da Ponte: It's still so bizarre to me that I've been here in Memphis making music for 13 years and playing shows for 11. My first show was at the old Galloway Church in Cooper-Young in 2008. It was so shaky and uncertain. I talked too much between songs. It's so hard for me to be vulnerable, it still is, but I stood up there with my band because I had these songs and the songs just kept coming. I just reached a point where I didn't know what else to do. It felt like a waste to just keep them to myself. That much hasn't changed. The songs continue to come. I love to sing and I love to write so I've found myself in this sort of permanent-yet-casual relationship with making records.


The new album’s opening feels very cinematic to me. There’s space in the arrangements on “Girls,” and I can visualize the scene - the road, the “feet on the ground.” Is that what you wanted?

"Girls" was inspired by the HBO series Girls. I started the song as a letter to creator/actress Lena Dunham, but I address her by her character's name, Hannah. I was a fan of the show and happened to catch an interview where she answered questions about being a female in the industry. It was easy to see the parallels between her personal life and the show she'd created. She inspired a lot of people and this was all in the midst of a very political climate, when Hilary [Clinton] was running for president, a topic the interview also touched on. So, the song ended up being, for me, a very political statement.

What was it like working with Krista Lynne on Jana Misener? They’re some talented players.

Krista and Jana are wonderful. So easy to work with, obviously super-talented and really kind people. They came in and took the song "Work to Do" to another level. This is another example of Memphis at its finest. Look how much talent is in our area. I wanted to bring as much of that together as possible.


To me, “Work to Do” is a particularly mature song. Even as you say “you’ve got work to do,” there seems to be an understanding there that suggests a more nuanced emotion than you get in most pop songs. I think the switch to first person at the end really underscores that.

Yeah, "Work to Do" is such a raw song for me. My little brother died a couple years ago, just a month shy of my son — my first child — being born. That was a whirlwind time — emotions all over the place, as you can imagine. It was such an intense experience to watch my child be born and go home with a newborn all while in the thick of grief. So, the song, too, is both sad and really full of hope.


Your father, siblings, and nephew contributed to “Sibling Song.” What was it like working with family? Had you done that before?

I've never been able to pull my family into the studio before, but I've always wanted to. After so much tragedy in our lives I finally thought, "What am I waiting for?" So, we made it happen.

My parents and my older sister in particular have really great voices. My mom's mom sang opera and my dad's mom has always sung in her church choir. It really was such a special moment having them come in and sing on this song.

And at the very end of this track you can hear my little brother say, "We're related to Alex da Ponte. She's aight," and then laugh. Had to incorporate him in someway. Any excuse to hear his voice. Part of grief, for me, has meant finding ways to keep him alive. Now he'll forever be chuckling at the end of one of my songs, and I love that.


Is that your nephew on the cover of the album?

That's my son, Oz, on the album cover with me and my wife, Karen. My best friend, a transplant from Missouri who has become a Memphis staple in the local film scene, Breezy Lucia was the photographer.


Is music a big part of your family life?

It is. When my dad's side of the family gathers we end up singing a lot or sharing music we like. Sometimes it'll just be my dad, his sister and his mom singing harmonies a cappella while the rest of us sit and swoon. 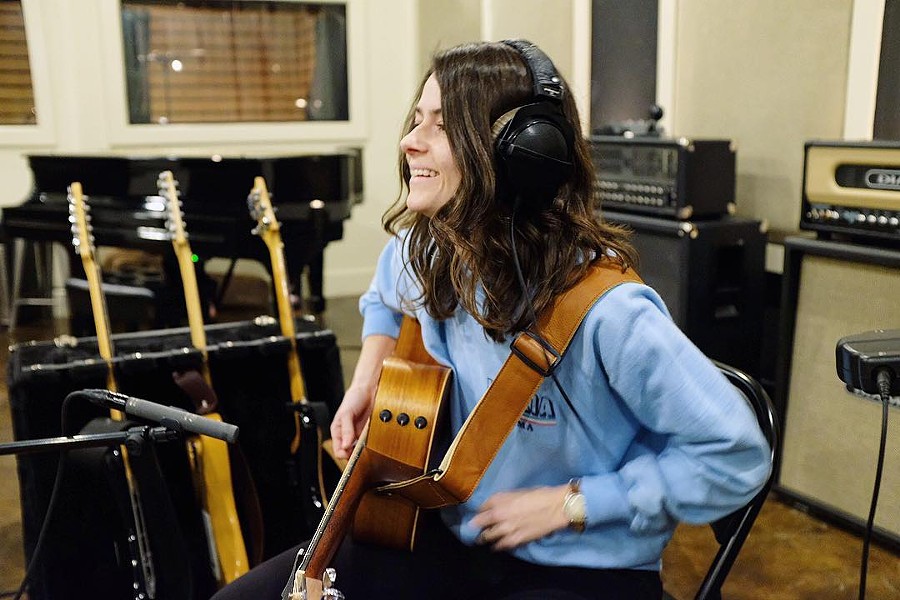 I really like the tone of the record, “Memphis” in particular. There’s a very Memphis inflection to the sound, but it’s subtle. Clean guitars, tight rhythm section, a little bit of shuffle to the drums. How much of that influence is Toby and Pete?

Oh, man, Toby and Pete. That duo. I did my very first record with them back when High/Low Recording was on Cleveland, near the Crosstown Concourse. And Pete was in my band for a long time.

I have so much love and admiration for them and what they bring to the projects they work on. My songs just don't feel complete until they've had their hands on it. Sincerely. I've learned so much from Pete in particular. He has had such an impact on me as a musician. Forever my stage brother and wise Yoda mentor.


You co-produced the record, right? Can you tell me a little about that?

I have accidentally co-produced every record I've done. I'm very hands on, and I always have a vision of how I want things to be. I know what kind of sound and vibe I'm going for. I'm so lucky to work with producers who are so open and even encouraging to spit-balling ideas together. That's another thing that I learned from Pete — you put ego aside and do what's best for the song.


Talk a little about that “we got a fire inside us” line. What does that mean in relation to being a Memphian to you?

In high school, I hated it here. I thought I needed to move to a bigger city to be able to thrive but then I found myself in Midtown and making connections with so many like-minded people. Dreamers that were making things happen. Small business owners like Kat who owns Muddy's Bakeshop, the Choose 901 crew, Outdoors, Inc., where I worked for a few years. Everybody was doing something. It was and is so inspiring.

Now, I feel like I'm an advocate for this place. I'm in love with it. When we did the music video for this song, I wanted to hit some of these places that inspire me and help make this city the place I love so we filmed a bit at the new indoor skatepark over on Broad called Society and the climbing gym that opened up in Soulsville called Memphis Rox.

“I’ve written songs in a lot of different ways, but it always turns out best when the lyrics come first and I put guitar to it later. I’m a writer before I’m a musician.” click to tweet


Can you tell me a little about your songwriting process?

I've written songs in a lot of different ways, but it always turns out best when the lyrics come first and I put guitar to it later. I'm a writer before I'm a musician. In fact, my great-great-grandfather was Lorenzo da Ponte, librettist for Mozart. He wrote the words to Mozart's operas. Writing, by blood, is my strong suit I think.


I think you have a real flair for telling stories. What are some of your influences?

My greatest influence is writer John Fante. Hands down. I've read everything he's ever written, and the influence has permeated my entire being. Musically, though, there's a band called Shovels & Rope that swept me off my feet about seven years ago at the Hi Tone. I've never seen a cooler couple. They give 110 percent every performance. Worth checking out if you haven't already. Their latest song "Mississippi Nuthin'" is one of my very favorites.


Are there any concerts coming up or anything else I should promote?

We don't have anything booked at the moment but we do have a music video out for the song "Memphis" that we'd love for people to check out. Also, all the songs are on Spotify, iTunes, and Apple Music.


Is there anything else you want to talk about?

I'd like to mention my band boys. Kris Acklen played bass (and some keys) for me on this record. He has been really fun to work with. Joe Austin is my go-to guy now days. Amazing guitarist. Added a lot of cool lead guitar stuff that totally makes the songs shine. And Mark Petty II played drums. You've probably seen Mark in the Smiths cover band around town. They are super tight. I was very lucky they all signed onto this project. I hope to keep them around!

Alex da Ponte This Is Ours Memphis music songwriter