It’s Saturday morning of Gonerfest, and I have a headache. And I’m not the only one. Folks from all over the world are cursing the bright, fall sun of Memphis the morning after an overstuffed night of punk, garage, no-wave, and the indescribable.

And too much beer. Did I mention the beer? Memphis Made brewed a special Gonerbrau cream ale, and it only comes in tall boys for your beer-spraying convenience.

After a full afternoon at Memphis Made with Static Static, Lenguas Largas, Fuck, Graham Winchester, Kelley Anderson, and Tyler Keith, Goners reconvened at Crosstown Arts auxiliary gallery at 430 Cleveland. Miss Pussycat, Quintron’s partner and celebrated artist and puppeteer who recently got a fellowship and retrospective at the Ogden Museum in her native New Orleans, performed her puppet show "The History of Egypt” to as packed a house as it is possible to have. After Antony was defeated at the Battle of Actium, and Cleopatra got fatally intimate with an asp, Miss Pussycat added a post script set in the holy Egyptian city of Memphis detailing the founding of Goner Records and the Mummies playing Gonerfest. Later, Goner co-owner Zac Ives confirmed that this was the first time he had ever been portrayed in puppet form.

(I was unable to confirm with Eric Friedl if he had ever been represented via puppetry before that evening.)

In years past, the golden passes have consistently sold out, but individual tickets could still be had if you got to the venue early. This year, Friday and Saturday sold out weeks ago.

“It’s like Mecca, almost. Everyone comes together,” says Megs from Louisville, who is here with her friends Yoko and Aaron.

This is Megs’ second Gonerfest, Yoko’s third, and Aaron’s fifth. They say they’re here primarily to see the Oblivians reunite with Quintron to play their watershed 1997 album Oblivians Play 9 songs with Mr. Quintron. The descriptively titled album is the best Memphis rock record since Big Star’s Third/Sister Lovers. Its reputation has grown in the 22 years since the January 1997 afternoon when Quintron rode the bus up from New Orleans and recorded the album with Greg, Eric, and Jack in one eight-hour session. It sits in an unlikely pocket of lo-fi, punk, and gospel, and the songs have been rarely performed by the full band. “It’s my favorite album,” says Megs.

At 9 p.m. sharp, Mallwalker from Baltimore, Maryland, gave the evening a swift kick in the ass. Singer Sarah Danger, who would act as the MC for the evening, reserved some special vitriol for the anonymous person who accidentally broke her foot during the band’s 4 a.m. after-show last year. Afterwards, I talk to her as she’s rehydrating at the bar about the band’s big stage debut. “It was fucking amazing while I was up there, but it was horrible beforehand because it was so nerve-wracking!.”

This is Danger’s eighth Gonerfest. “One of my favorite ones was when Guitar Wolf played the opening ceremony. I had never seen that kind of energy. It was so sick.”

The second set of the evening was Richard Papiercuts et Les Inspecteurs. The New Yorker crooned like a hyped-up Brian Ferry. It was an '80s-infused dance party, with the evening’s only saxophone, and an example of how the sounds at Gonerfest have expanded and diversified over the years.

At 10:30 p.m. was the legendary M.O.T.O. Paul Caporino’s low-fi, pop-rock machine mesmerized the crowd. The peak of the set came with “Tastes Just Like A Milkshake,” a Memphis favorite covered by Secret Service.

Brisbane, Australia’s Thigh Master had the distinction of throwing their record release party at Gonerfest. Now For Example is out on the label as of yesterday, and they celebrated in style, joined at one point by Memphis’ Jesse James Davis on vocals.
At the stroke of Midnight came NOTS, a Gonerfest staple, sounding as fierce as ever. Now playing as a three piece after the exit of keyboardist Alexandra Eastburn, Natalie Hoffman did double duty on guitar and synth, while Charlotte Watson and Meredith Lones pounded out titanic rhythm behind her.

People on the floor jockeyed for position as the back stage curtains parted to reveal Quintron’s massive vintage Leslie speaker. Violet Archaea was wearing a "Kill A Punk For Rock and Roll” shirt, famously featured on the cover of the Oblivians album Popular Favorites. “This is my first one, but I’ve been wanting to come since I was of age,” she says. “It’s everything I want.” 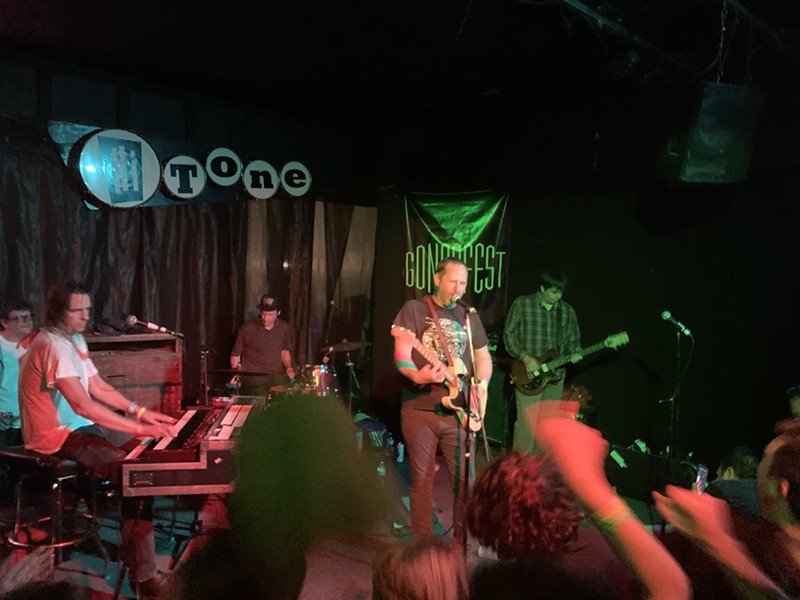 When Greg Oblivian began the circular riff of “Feel All Right,” the packed Hi-Tone surged forward. Seconds later, the first thrown beer of the night nailed him right in the face. It couldn’t have been more accurately aimed if it was actually aimed. This served to piss him off, and for a glorious hour or so, the snarling, rock-hard Oblivians of old were back. The gospel songs played by punks with a lot more miles on ‘em than in 1997 revealed new depth as they rattled down the road like an old truck about to shake apart. “Before this time another year/I may be gone/In some lonesome graveyard/Oh Lord, how long?”

They encored with the New Orleans zydeco stomper “Call the Police” from their Desperation album, and then Greg decided to teach the band a new song right there on stage at the Hi Tone in front of a packed house at 2 a.m., just to make sure the crowd got that vintage Oblivians experience.