Whether it's The Man in the High Castle or the upcoming For All Mankind, alternative histories are capturing something deep in our psyche right now. "If only a few things had been different, how might history have unfolded?" But the logic of such re-imaginings has thus far not been applied to music much — until now. Leave it to the MD's, Memphis' own combo featuring the music of Booker T. and the MG's, to go there.

In a multimedia tour de force that the band has been honing for months, they'll set out this Friday to imagine just what it might have sounded like if the Stax house band, who famously re-interpreted The Beatles' Abbey Road on their album McLemore Avenue, had somehow given that treatment to Revolver four years earlier.

I spoke with MD's bassist and arranger Landon Moore to get an inkling of what the audience might expect, and found it will be a lot more than I could have imagined.

Memphis Flyer: What was the genesis of this idea?

Landon Moore: I guess it started when we decided to do McLemore Avenue as a show. It was a fun record to learn, and it definitely gave us insight into how they approached arranging things: where they took liberties, how they chose to do the medleys, and songs they decided to leave off. For a long time the MD's have wanted to do something 'original.' So we thought, you know, McLemore Avenue went over well, so let's just do Revolver. And there really was a chance that Revolver could have been recorded in Memphis. It's been documented: Brian Epstein was here in March 1st of 1966. He was staying out east and toured Stax with Steve Cropper and Jim Stewart.

So in covering Revolver, we're essentially going to do it the same way McLemore Avenue was done. We took liberties, there're medleys and stand-alones. But predicting what the MG's would have done is difficult. When listening to the version of "Eleanor Rigby" that they actually did ... Well, if I was asked to come up with something I thought they would have done, I never would have come up with that. I never would have thought of it. So we took everything that they were doing from 1966-68 and said, 'Let's pull rhythmic elements and tones from these songs, and let's force this square peg of Beatles songs into this triangle that is Booker T. and the MG's.' What we got was something very interesting. We'd say, 'This is the groove, this is the bass line, and you have to make this into "And Your Bird Can Sing."' Then you're left with, 'Whoa! That's interesting!' I would study little sections where it's just All Jackson, Jr. playing and say, 'I'm going to force "Tic Tac Toe," off the MG's second record, to be "Tomorrow Never Knows."'

So there were a lot of surprises. What was the biggest?

The most interesting thing that came out of the whole process was, we didn't want to just have it be music. So what we'll have Friday is an interactive documentary about 'what happened in Memphis when the Beatles recorded Revolver at Stax.' It's this Ken Burns-style documentary that follows Brian Epstein's trip, which turns out to be very successful!

The Beatles actually come here for chunks of time, culminating at the end of July 1966, right before they're about to release Revolver. It imagines what the Beatles did in Memphis, how they interacted with the MG's. Why Booker T. and the MG's, in 1966, decided to record Revolver, an instrumental version to be released on Stax. And how the biggest band in Memphis and the biggest band in the world both mingled and clashed. So we will be performing the role of Booker T. and the MGs, as they arrange this record. Which they decide to call Revolve-Her.

It sounds like you'll be alternating between live performance segments and portions of this documentary.

Yes, it will be back and forth. There'll be a segment up front that sets everything up. And the audience will be surprised at some of the photos featured, let's just leave it at that. The Beatles are unaware that the MG's are arranging a version of the record they are currently writing in Studio A of Stax. Booker T. and the MG's are doing this in secret, in the back, in the demo studio at Stax, while the Beatles are recording. And there's this whole elaborate plan that Cropper comes up with, of ways to get these chords. He's essentially watching Lennon and Harrison's hands, and then delivering that information to the demo studio. But then Al Jackson, Jr. books a secret show at Club Paradise, under the name the MD's. John Lennon finds out about it, and makes someone take them to Club Paradise. And that's where the first medley happens ... 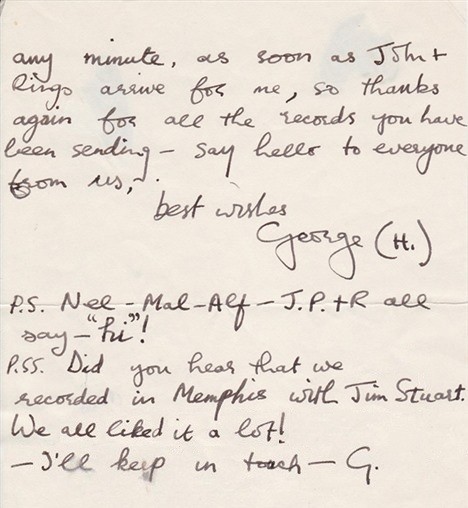 Hear the MD's perform their interpretations of Revolver live, mixed with their faux-documentary, at the Kemmons Wilson Family Stage at Crosstown Theater, Friday, October 4th. Doors at 7:30 p.m., show at 8 p.m. $20