Vaneese Thomas Brings It All Back Home, With Show, New Album

Though she's a longtime resident of New York, Vaneese Thomas has Memphis deep in her soul. So her show at Lafayette's Music Room tonight has added significance. As the youngest daughter of Rufus Thomas, she had a ringside seat for the Stax circus in the label's heyday, and she saw her older siblings, “Memphis Queen” Carla Thomas and keyboardist and producer Marvell Thomas, thrive there. Vaneese, on the other hand, left Memphis for college, where she cultivated her own style, and a New York-based career. Her self-titled debut album spawned the Top 20 US R&B singles “Let's Talk It Over” and "(I Wanna Get) Close To You" in 1987.

She's covered a lot of stylistic ground since then, most recently with albums grounded in the blues. But her latest album, Down Yonder, is a more eclectic slice of classic soul. Thomas is the project's co-producer and either wrote or co-wrote all of its twelve tracks. Joining her are: Shawn Pelton on drums and percussion; Paul Adamy, Conrad Korsch and Will Lee on bass; Al Arlo on acoustic and electric guitars; Thomas' husband and the disc's co-producer, Wayne Warnecke, on dobro and percussion; Tash Neal on dobro and electric guitar; Robbie Kondor on keyboards and organ; Charles Hodges and Paul Mariconda on organ; Marc Franklin on trumpet; Tim Ouimette on trumpet and flugelhorn; Lannie McMillan and Ken Geoffree on tenor saxophone; Kirk Smothers and Rick Kriska on baritone saxophone; Katie Jacoby on violin; and, last but not least, sister Carla Thomas and Berneta Miles on background vocals; and Kevin Bacon on lead vocals.

Speaking with Thomas recently about her upcoming show, I found it has a regional focus that resonates with Memphis as much as any of her other blues records.

Memphis Flyer: How did this new album come about?

Vaneese Thomas: Well, I mentioned it in the spring, and my husband was like, Okay, here we go again...But I'm so happy with the sound of it. I think it's the best material I've ever written. It's good story telling.

In your most recent albums, you've been exploring the straight up blues, but this sounds like a dynamite classic soul record.

I've been calling it 'blues and beyond.' Because, you're right, there's so much blues and gospel in it, but it's a little departure from and expansion on traditional blues. Like any style of music, it has the capacity to expand, and you certainly don't have to stick to the traditional Delta blues.

Some of the promotional material notes that "she tells stories of her Southern upbringing." How personal are these stories?

Well, it's not necessarily my personal experience, but certainly the experience of my Southern upbringing. For example, the story of "Ebony Man" is about African-American farmers and the difficulty they've had ever since post-slavery, in keeping their land. Because a lot of it was taken from them. It's a current phenomenon as well. The New York Times just had an article about this very issue. Where ConAgra and lots of corporate farming interests have been pressuring people to give up their land. And of course, the black farmer, being at the bottom of the totem pole, has had the most difficulty over time, maintaining his property. So those are the kinds of stories I'm telling: not just my personal experience, but my Southern experience.

Wasn't your father's family from rural Mississippi? Did he have rural roots?

He was a baby when his family moved to Memphis, so he didn't really know the rural experience. My mother did because she was raised on a farm in Whitehaven. But daddy was always urban. His parents moved into the city almost right after he was born.

You moved to New York when you were fairly young. You seem pretty happy there.

Oh I am. It gave me an opportunity that I would never have found here, for expanding my musical horizons. There used to be so many ways to have income streams. Playing live, doing television, touring. All the kinds of things you can do. But because television was rooted there, I got to know Paul Shaffer and Will Lee and all those guys who did TV. So I was always first call for television shows, and artists coming through town who needed singers. That sort of thing. So New York's been very, very good to me.

And I suppose you're always helping to bring a bit of Southern flavor to the city...

Oh, no question. 'Cos they love that kind of background in your singing.

Speaking of your singing, as I listen to the new album, I'm reminded how different your voice is from Carla's.

Oh my gosh! She has a sweeter tone, I think. It's interesting. Our church was very straight-laced. It was not the gospel experience people expect from Memphis. We grew up in a very straight-laced Baptist church. So we sang hymns and anthems. It was very different from, say, the Pentecostal religious experience. So neither of us really had gospel as a foundation to our singing. But because we had access to the blues and big band and gospel, just being in Memphis, it certainly was a part of our experience.

Did any singers in particular have a big impact on you?

Well, it's interesting. When I was younger, it was the British Invasion. I loved all the Beatles' stuff. The variety of their music was a big influence on me. Because I realized you can't be monolithic. You have to have a wide variety of musical experience to grow. So I loved the Beatles.  I was always playing and singing, but when I got to college, I began to play and sing at the same time more often, for concerts. And Elton John was a tremendous influence on my playing and writing style.

You were playing piano?

Yes, piano. And if you listen to "Down Yonder," not only is that song a little gospel-y at the end, but at the beginning it's very Elton John, like "Your Song" or "Tiny Dancer." That kinda thing. So if you combine all that with other influences like the Staple Singers and Otis Clay and Al Green, you've got a tremendous well to draw from.

You have quite a band to back up your singing.

Oh yes! I am so pleased with the guys that played, both in New York and here. In fact, the horn players on the album are playing with me at Lafayette's. All three of them. Then in New York, one of the best drummers ever is Shawn Pelton. This is right in his wheelhouse. And Will Lee can play anything. He's just multi talented, from blues to Jazz. And Robby Kondor used to be Carole King's son-in-law, so I've known Robby for years. And he plays gospel as well as anybody I've heard. It's sort of like a Spooner Oldham kind of vibe. These cats are really multifacted. And when I came down here to do some overdubs, I got Marc Franklin to do my horn arrangements. He just sits in it so great. And Lannie McMillan and Kirk Smothers. And my sister sang background on a few songs, and my friend Berneta. So it's just the best of all worlds.

Where did you record when you worked here?

At Royal Studios, of course! If the walls could talk... And Boo Mitchell was the engineer, so I had all my peeps with me. 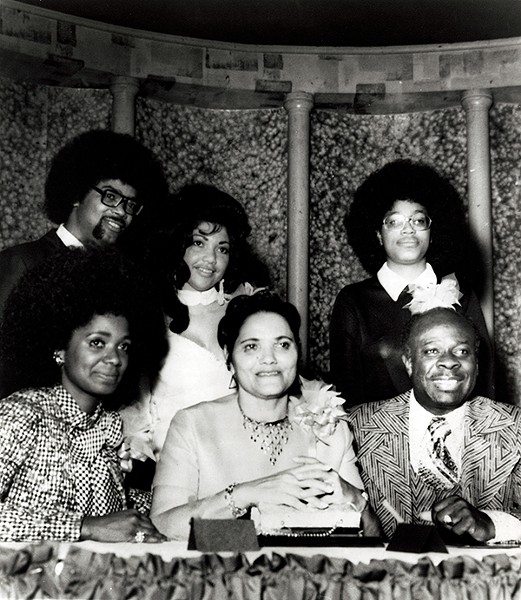