The atmosphere on Beale Street was more carnivalesque than usual last night, as Elton John fans filed into the FedExForum to catch Memphis' last glimpse of the storied entertainer. That the show happened the night before Halloween was entirely fitting, with many fans paying homage to the glam-master's wardrobes of yore. But along with the glittery trappings and finery, it was a powerful measure of just how dearly Memphis fans hold his music to their hearts.

Looking stout but far more spry than most 72-year-olds in his rhinestone-bedecked tux, John commanded the proceedings from a grand piano, stage right, as the band, featuring players dating back to his 70s tours, spread out on a multi-level stage set below a gigantic Jumbotron screen. All was framed by a gold-bricked, medallion-festooned proscenium topped with the tour's motto: "Farewell Yellow Brick Road." This is John's final series of performances.

Later in the show, after a rousing performance of "Sad Songs (Say So Much)," John addressed the bittersweet context of the show directly. "This is my 50th year of touring. I couldn't have imagined a farewell tour even 10 years ago, but 10 years ago, I didn't have a family. Now I do.

"The greatest thing is to get a reaction from another human being," he went on. "Thank you, Memphis, Tennessee. You're in my soul, you're in my heart."

Judging from the ecstatic reaction from the crowd, John was clearly in their hearts as well. They also responded to a very personal moment between songs, when he frankly described his battles with addiction. "Ask for help!" was his advice to substance abusers. "Don't sit on the pity pot." After he himself asked for help, he noted, "I got sober." At that, the crowd went wild with cheers and applause. It was a remarkable moment.

With a Jumbotron screen displaying either close-ups of the band, or pre-edited montages of images, videos, and animations, one sometimes forgot to look at the actual humans on stage. Then, a thumping sub-woofer boom from the kick drum or synthesizer would snap you back to reality. But percussionist Ray Cooper, who first toured with John in 1974, gave the Jumbotron a run for its money with his theatrical skins- and gong-pounding. This was most entertaining when the rest of the band left the stage, leaving only Cooper and John to perform the epic "Indian Sunset."

Introducing the tune, John described writing songs with longtime collaborator Bernie Taupin. Upon first seeing some freshly-written lyrics, John noted, "a little movie appears in my mind. Then I put my hands on the piano." Taupin's lyrics for "Indian Sunset," he said, "were five and a half pages long." The grandiose, three-part suite was the result.

The power and proficiency of the band shone on a parade of both hits and, like the aforementioned tune, deep cuts. Some of the greatest rave-ups came in the extended outro jams to "Rocket Man" and "Levon." On the latter, John revealed how powerful and precise his voice still is, even if his classic falsetto had to be carried by other singers in the band. And, with a nod to his stage histrionics of yore, he rose out of his seat to pound the keys at the climax of "Philadelphia Freedom."

After the encore concluded with "Goodbye Yellow Brick Road," which John performed in a silk dressing robe decorated with cats, he tossed off his outer garment to reveal a track suit beneath. Climbing onto an automated ski-lift-like platform, he waved to adoring fans as he was lifted up into an opening in the video screen, seeming to retreat into his own fantasy and the fantasies of the Memphians who have marked their lives with his music.

See the slideshow by Jamie Harmon, below. 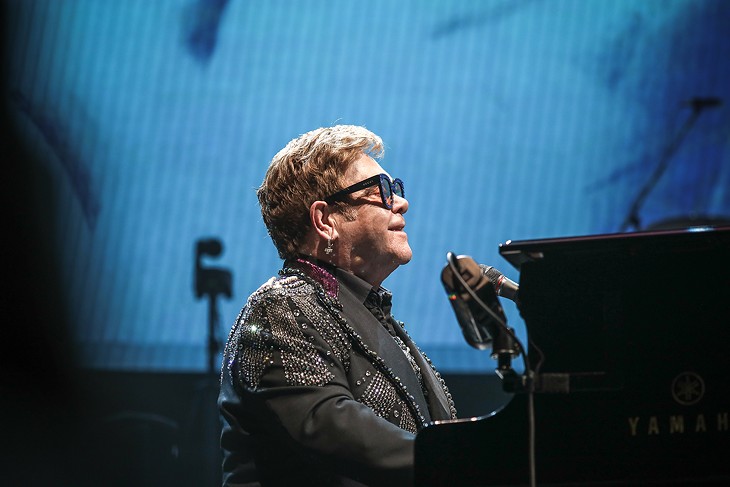 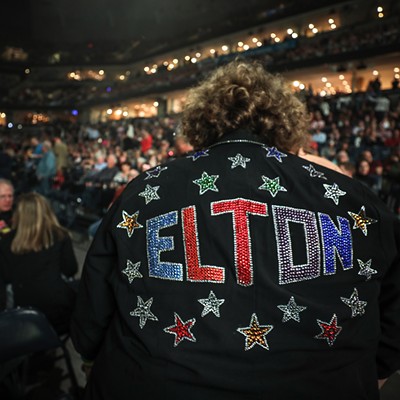 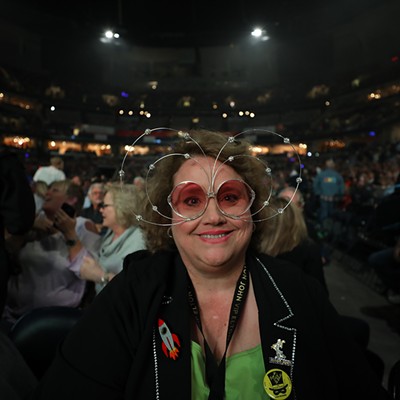 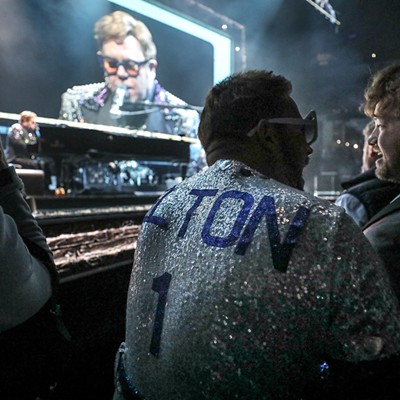 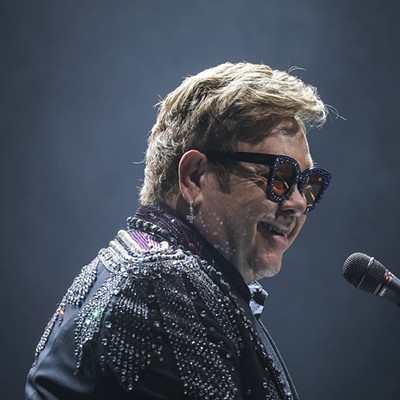