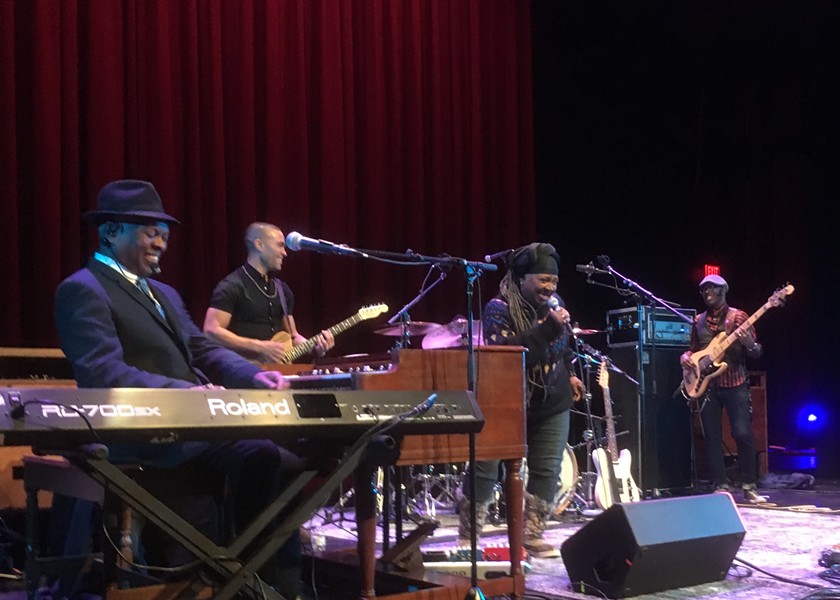 "My first guitar was a Sears Silvertone," quipped Booker T. Jones during his appearance at Crosstown Theater Saturday. Looking up at the walls around him, he added, "I must have bought it right here."

Crosstown Concourse, of course, was then the regional warehouse and retail center for Sears. He went on to recall how he quit buying records at Sears after he discovered the Satellite Record Shop, the storefront at the entrance to Stax Records in its heyday. At Sears, he noted, you couldn't hear the record until you bought it. "But Steve Cropper was happy to play records for you."

Such are the perks of hearing one of the progenitors of classic soul play his hometown, where, once upon a time, lightning was captured in a bottle, or at least on vinyl. And Jones seemed to revel in the memories.

But the magic of such anecdotes paled before the majesty of the music, unerringly played by Jones and his band (which included his son Ted on guitar, Melvin Brannon, Jr. [aka M-Cat Spoony] on bass, and Darian Gray on drums). Time stood still as the sounds of Jones on the Hammond organ, complete with rotating Leslie speaker, filled the auditorium with the harmonies known from so many classic records.

Though Jones' latest album, Note by Note, surveys tunes from across his lifetime as a player and a producer, Saturday's set was decidedly Memphis-heavy, with a heaping dose of originals by Booker T. & the M.G.'s. There was "Green Onions" in all its minimalist glory, and "Time Is Tight," complete with its powerful coda. "Hip-Hug Her" also was honored, albeit with a twist: flowing lyrics rapped over the tune by Gray.

"And now, here's a piece by George Gershwin," Jones noted, before launching into the M.G.s' arrangement of "Summertime," as perfect a showcase of his organ mastery as any of their cuts.

But the legacy of that Silvertone guitar was also alive and well, as Jones picked up a Telecaster and sauntered to the front of the stage from time to time, delivering very personal interpretations of "Hey Joe," a la Jimi Hendrix, "Purple Rain" by Prince, and others. At times, he sang sublime harmonies with his son.

But the most sublime harmonies of the night came when Jones called "an old friend" to the stage, none other than the Queen of Memphis Soul, Carla Thomas. Jones, noting the importance of the Thomas family, and especially Carla's father Rufus, described seeing the movie Baby Driver and unexpectedly hearing her sing in the soundtrack. Then they launched into "B-A-B-Y," one of Carla's greatest Stax sides. She was in fine voice, her delivery full of her trademark sweetness and wit. It was a luminous moment, with Carla, Jones and the band breaking out into beaming smiles throughout.

It was a dramatic moment, especially because Jones typically approached each song with a solemnity that seemed to exhort the audience to listen with care. And listen they did, the entire room rapt with adoration for the grooves and the moves that helped put Memphis on the map.

Opening the set were students from the Stax Music Academy, who did right by such classics as "Soul Man," "Soul Girl," "When a Man Loves a Woman," and even Peter Gabriel's Stax-influenced "Sledgehammer." For those who slept on it, let it be known that Memphis Soul is alive and well and kicking.