If you've binge-watched too many movies and television series during this stay-at-home time, and have done every jigsaw puzzle in the house, the Stax Museum of American Soul Music might just have the solution for the social distancing doldrums. As of now, their massive digitized archive is online, free for perusing.

Though I personally feel that visiting the Stax Museum is an essential service, I realize that I'm in the minority, and, like most businesses these days, it's not open to the public. But never fear, you can still crank up your Stax albums on the stereo and page through the many gems that the museum has diligently preserved.

The Grammy Museum Foundation has assisted with the new online project, known as Deep Cuts: Rare Items from the Stax Archives. The visual materials are broken down into categories of album cover art, posters and other artwork, children's books, trade ads, the "Gettin' It All Together" catalog from 1969, and the "Stax Fax" magazines produced by the company between 1968 and 1970. 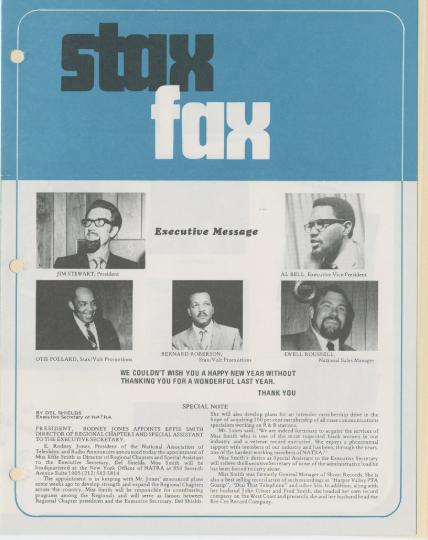 Of particular interest is the "Gettin' It All Together" catalog, which features the 27 LPs released during Stax Records' "Soul Explosion," the massive sales summit at Memphis' Rivermont Hotel in May, 1969. This was important both as a promotional stunt and as a morale-enhancing victory lap. By 1968, the entire Stax Records catalog from previous years was claimed by Atlantic Records, and the Memphis label was forced to reinvent itself with all new material. This richly illustrated program features album cover art and other information about the fresh wave of records released in the year that ensued.

Now fans can relive that pivotal moment in soul music history and more, via this generous online project. It's just one of many ways to keep yourself occupied during these quiet days, and really, there's no better respite from that gnawing coronavirus anxiety than the solid soul music of Stax Records.