Jerry Phillips Remembers Brother Knox: "He Was The Keeper Of The History"

Last autumn, I found myself in Jerry Phillips' office at the headquarters for WSBM and WQLT, the family's radio stations in Florence, Alabama. The conversation I had with Jerry and his daughter Halley that day ranged from music production techniques to professional wrestling. But one thing kept coming up again and again: Jerry's older brother Knox, who had been in poor health for some time. “My brother is real ill,” Jerry said. “He used to go all over the country. He's got every award you can get. And now he can't do anything; it's really a sad situation.”

Last night, those words took on an added poignancy when it was announced that Knox Phillips, son of celebrated producer Sam Phillips and his wife Becky, had passed away, bringing closure to a prolonged period of immobilization that had been tortuous for the entire family. “He's been out of the picture now for about four or five years,” Jerry said, last September. “It's been a real tough go for our family to see him not be able to even get up and walk anywhere. It's been a real hard thing for our family, 'cause you know Knox was just as important as Sam in a way. He was the keeper of the history. He was the one that always knew everything about Sun. He was the one that always got things going.”

Knox Phillips' importance to his family's legacy, and to the history of Memphis music, cannot be overstated. Though never content to merely live in his father's shadow, he came to embody his same iconoclastic spirit, ushering those values, and the Phillips Recording Studio, into the 21st century. “He was a great record producer, a great mixer,” Jerry noted, and his role in the co-production of John Prine's Pink Cadillac at Phillips Recording in 1979 is the perfect example. Recounting the making of that record, Jerry recently interjected, “We can't leave my brother Knox out of all this, who has his own wild way of producing records, too. He was very effective in those sessions. 'Cause you know Sam only came in for a couple of days.” 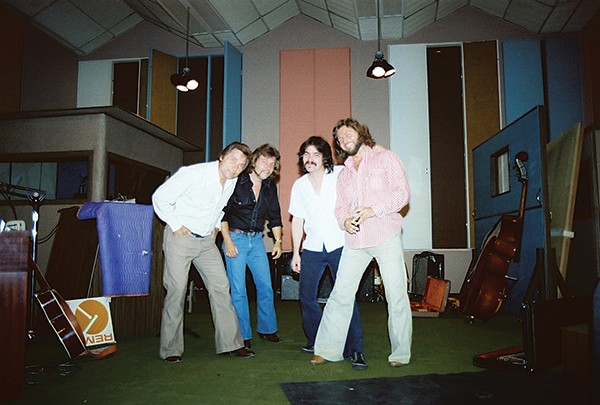 But Knox Phillips' skill-set went far beyond his recording acumen. “My brother was a political science major in college,” Jerry said. “He gave that up. I think Sam was looking for him to run for governor or something. Knox, he didn't want to do that. But he was the consummate Memphis music politician. Also he could produce records, and he was a good guitar player, too.”

As for his command of the music scene's street-level politics, the most obvious example would be Knox's tireless efforts to establish a Memphis-based chapter of the Recording Academy, formally the National Academy of Recording Arts and Sciences (NARAS), in 1973. “He got the NARAS chapter here,” said Jerry. “He lobbied for it. Hard. And he paid for, like, 50 people's dues. For years. Just so there would be members, you know?” To this day, the Memphis chapter, also representing New Orleans, Louisiana, and St. Louis, remains a forward-thinking force in the professional organization.

Beyond that, he took a uniquely personal approach to the Memphis music scene, embracing players from all levels of recognition and success. “You wouldn't believe how deep his roots went into the love of Memphis music, and the love of people who didn't have enough money,” Jerry said. “He paid Furry Lewis' electric bills!”

He was indeed the keeper of the history, and played a decisive role in shaping how the family legacy would be remembered. Discussing Peter Guralnick's masterful biography, Sam Phillips: The Man Who Invented Rock 'n' Roll, Jerry points out that “Knox was the one that got Peter Guralnick involved. When that book came out, Knox could not even go to any of the panel discussions, and he would have been all over that. He would have been up there, he'd have been setting it up, he'd have been doing things. He spent 25 years working to get that book done. Twenty-five damn years. 'Cause Sam wouldn't talk to Peter for the longest time. There were all these other writers that were trying to get that story. And Knox kept saying, 'You don't want these guys, this is the guy you want to write this book.' So over a 20-year span, they kept getting together and getting together and getting together, and that book is almost completely Sam's own words. There's a lot of Peter's words in there too, of course, but I'm just saying, it's not just something that Peter guessed at. Sam wanted to write his own book, he thought. But he would have never done it.”

Clearly, Knox's extended illness and passing have left a huge void in the family. “I was always the rebel of the family. I was always more interested in the performing side of it, the playing side of it, than the politics of the music'" Jerry mused. "So when Knox had to get out of the picture, I had to step up to the plate and do some of the stuff he was doing. Showing up at these functions and speaking to the press.

“We've got Knox to thank for a lot of stuff. We really do. I try to always share the spotlight with him, 'cause he's really the guy that deserves it.”