The forecast this weekend calls for clear skies and moderate temperatures. If this were any other year, thousands of Memphians would probably be daydreaming about nights on the lawn at the Levitt Shell in Overton Park. But COVID-19 means that Levitt Shell executive director Natalie Wilson was forced to make some tough decisions.

“The Levitt Shell is on pause indefinitely,” Wilson says. “We hope to play on the stage again when it’s safe for all, but we’re going to take a proactive approach to opening.” 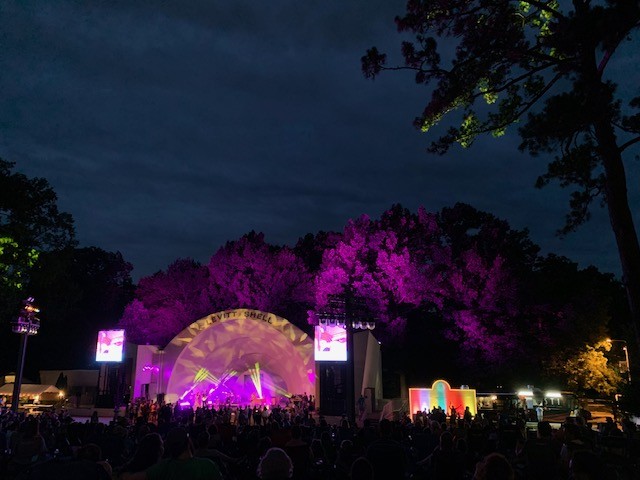 “We’re an open-air amphitheater. There are many ways to come into the venue, and social distancing at the Shell would be very difficult,” Wilson says. “If we put a fence around the Shell and say, ‘Okay, the first 500 get in and no more,’ well, that’s not meeting our mission of inclusivity, of open space, common ground, the diverse audience that we inspire.”

Wilson knows how important it is to keep the music going, but the health and safety of the community, performers, her staff, and volunteers has to be the first priority. “Right now, we’re focusing on the people first.”

To combat the quarantine blues, Wilson says, “We created the Orion Virtual Concert Series, which launched in April. We’re launching some of the greatest hits from our past, and we showcase them on Facebook Live.” The Levitt Shell has footage of more than 500 full-length concerts performed in that historic Midtown amphitheater, and they are broadcasting the archival footage Friday nights. The performances will stream at 7:30 p.m. Central, to coincide with the start time for the Shell’s live shows in the past.

“When we put this out, we were thinking about our local community,” Wilson explains, but she adds, “We’re seeing people from all over the world joining us.” And why not? Already in May, the Orion Virtual Concert Series has shown a 2019 Delhi 2 Dublin concert, and this week’s show will feature genre-spanning pianist Charlie Wood. May’s shows will culminate with a 2016 concert by Memphis indie band Snowglobe on Friday, May 29th. (It was excellent. I was there.)


And as spring rolls into summer, in addition to the Friday-night archival shows, Wilson and her colleagues at the Shell will introduce live-streamed content on Saturdays. “We’re excited that on June 5th we’re going to be launching a second day of programming, which will be full-length live broadcast concerts. We’re calling them Shell Streams.”


“It’s a place that inspires community,” Wilson says of the Levitt Shell, which means her responsibility to the health and welfare of Memphis is doubly important. That’s why Wilson is committed to a data-driven plan to reopen the Shell — once there’s no question that it will be a safe and inviting environment for all music lovers.


Until then, she says, she just hopes that Memphians remember one thing. “We love our community,” Wilson says. “And we will be back.”