"When I heard Otis sing 'Lucille,' I thought it was me!" That's just one bombshell that dropped from the mouth of Little Richard many years ago, as he inducted Otis Redding into the Rock & Roll Hall of Fame in 1989. Some such inductions transcend sheer pageantry, and, though there was pageantry in all he did, Little Richard's tribute to the Big O was one of them.

It's worth revisiting that moment, now that the rock and roll firebrand, the "architect of rock 'n' roll," the Georgia Peach himself, has left us. Since Richard Penniman's death on Saturday at age 87, few could have missed the outpouring of both grief and love by a world celebrating his influence on modern music, from the Beatles to Prince. But fewer have noted the supreme influence of the Georgia Peach on another transcendent talent, usually associated with Memphis and Stax Records: Otis Redding.

That it was a deep and abiding influence is clear within the first seconds of Little Richard's appearance at the Rock & Roll Hall of Fame. As the band revs up the classic Stax arrangement of "I Can't Turn You Loose," he steps up to the podium and starts to sing. And it's eerie how much of Otis Redding's unique timbre and delivery is captured by his elder and inspiration, Little Richard, almost fifty years after Redding's own death. In that instant, you can hear the Richard in the Redding and the Redding in the Richard.


As he dips into other hits from Redding's repertoire, Little Richard's evocation of Redding's voice becomes more uncanny. Though the groove and feel of the Stax hits were very different from Little Richard's, and Otis never directly copied Richard's trademark "Wooooo!" (as the young Paul McCartney did), there is a deep resonance common to the delivery of both performers. And suddenly you can sense how powerful it must have been to be young and Black in 1950s Macon, Georgia, hearing and seeing a hometown hero ascend to immortality. 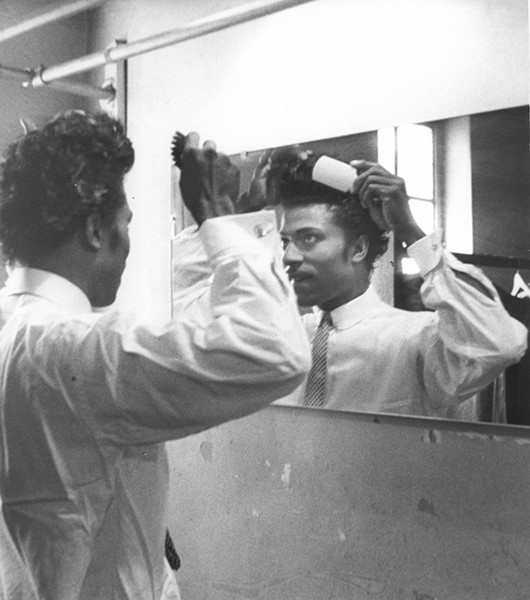 "I can remember when Otis quit school he went out on the road with Little Richard's old band, the Upsetters," remembers his brother Rodgers Redding in Peter Guralnick's Sweet Soul Music. "And he would send home $25 a week. That was a lot of money in those days...I remember Otis saying, 'One of these days I'm going to be like them.' He was just determined, there was nothing that could have stopped him."


Indeed, it was when singing Little Richard's "Heebie Jeebies" that the young Otis Redding tasted success for the first time. "That song really inspired me to start singing," Otis told writer Stanley Booth. "I won the talent show for 15 straight nights with that song, and then they wouldn't let me sing no more, wouldn't let me win that five dollars any more."

Before long, Otis Redding was singing in guitarist Johnny Jenkins' group, the Pinetoppers. When they had a regional hit with "Love Twist," Joe Galkin of Atlantic Records took notice, and sent them to Memphis to cut some more sides in the Stax Records studio. Galkin, claimed a third of all of Otis Redding's publishing royalties from that point on, and in return insisted that Stax's Jim Stewart record Redding as well as the Pinetoppers that day. He sang "These Arms of Mine" with the Stax house band, and the rest is history.


Viewing Little Richard's presentation from 1989, it's clear that he watched Otis' ascension with wonder and delight (and perhaps some envy?). As he sings one Otis hit after another, his internalization of the man's phrasing is remarkable. It's telling that, before that moment, Little Richard had not indulged in such music for decades. But when it was for Otis, he fired up the engines once more.

After the first number at the podium, Little Richard steps back to say, "I haven't done that in 30 years! Ooh my God, I felt good doing that. You all gonna make me scream like a white lady!"

When Richard invites Redding's wife, Zelma, up, the affection and protectiveness he feels for her is palpable. He won't let her speak until he takes her across the stage and exhorts photographers to "mash your button!" All in all, Little Richard's moment is less an induction ceremony than a warm embrace of all that Otis Redding meant to us, seemingly repaying the favor of Redding picking up where Richard left off, so many years ago. Want to explore Otis Redding's music? Start with his first album, Pain In My Heart, released in 1964 on ATCO Records, featuring his version of Lucille as the closing track.

To hear more Little Richard, there's no better place to start than his debut album from 1957, Here's Little Richard, recently remastered and reissued by Craft Recordings, complete with a second disc of studio outtakes and demos Richard recorded at home in Macon in 1955.