Listen Up: Jacob Davis on Co-Writing a Protest Song, 'Rise Up' 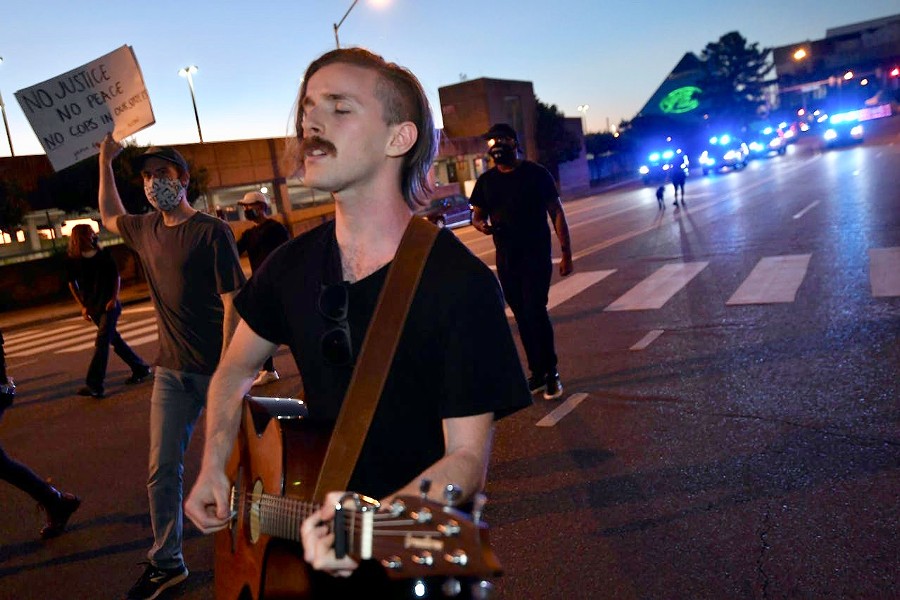 Jacob Davis believes in rising up.

The Memphis singer-songwriter, who rose up from facing demons in his own life, came to the forefront and participated in recent protest marches to help others rise up.

Davis, 25, also co-wrote “Rise Up,” which he describes as “sort of an honest letter penned to music to our nation in dealing with all the racial tension that’s going on. I got together with my buddy, Kyle Wright, and we’ve been writing together for the last year or so. The message is to break free from constraints. They are found in systematic racism. And to put policy in place that will bring more freedom and equality to the African-American community.”

He met with some of his friends who are Black and asked them what they thought about the song. “They really liked the song. I wanted to fully understand to the best of my ability what their culture goes through. It was very eye-opening and sobering.”

He and Wright are donating profits from the song to Campaign Zero, which is “an anti police brutality nonprofit.”

And, Davis says, “All of this will go to that organization for what it stands for.”

The song wasn’t written in his usual style, he says. “It’s a bit out of my comfort zone because it’s a funk tune. Man, I like funk music and I never released something with a funk feel and I thought it was time to do something. When I got with Kyle I gave him three different options. Three songs fully written. They had the chords and some of the riffs.”

Wright really enjoyed the funk version. “So, we stuck with the funk.”

Davis sang an 1963 song, popularly known as “Peace on Earth,” as he played his guitar and participated in four protest marches. “It was a united group. It was very peaceful and people were really locking arms. But everyone was very angry.”

He found the police supportive at the marches he took part in. “A few police officers were marching with us, actually.”

Born in Columbia, South Carolina, Davis grew up in a musical family. His parents and sisters all sang. “My dad was a recording guitarist and engineer. And I was in the studio with him. When I was growing up my dad worked at a studio called The Jam Room Studio in Columbia. That was his main job. And I’d be with him ‘cause in the early days we couldn’t really afford a babysitter.”

His mother was a nurse, so Davis often would be at the studio late night. Even though he was four or five, he still remembers those days. “My dad was the mix engineer and usually got brought in to record punk and rap bands. South Carolina was a very big alternative scene at the time. He was the guy.”

Davis still remembers some of the groups. “There was a band called Figure 4. Kind of a Rage Against the Machine group. They all wore wrestling masks.”

But Davis fell in love with blues and blues rock. He could sing the recording of  “When Love Comes to Town” by U2 and B. B. King when he was five or six years old.

Growing up, Davis and his family listened to a lot of “Christian underground bands.” Growing up in an unorthodox Christian family, he says, “We didn’t approach the Bible as a rule book. We approached it as a love letter from God to man. So, it’s all about this intimate relationship with Jesus. And everything we did was an offshoot of that.”

Davis doesn’t remember the name of the first song he wrote, but, he says, “It was something about being near to God’s heart.”

His life began spiraling downward after he and his family moved. “My parents are missionaries. So, we moved to Germany when I was 10.  And during that time I was severely bullied. I went through a lot of depression. I had night terrors until I was 18 years old. And it’s really easy to get a hold of alcohol when you’re in Germany. I started to have kind of a bit of a problem. If you can imagine a middle school kid drinking when they shouldn’t.”

He was bullied when he was 13 and going to a “missionary kid high school,” Davis says. “A lot of verbal stuff. If I was going to the gym they’d throw my clothes in the shower and they’d be wet. They’d try to hit and kick me. I was a very small kid. I ended up being the target.”

And, he says, “I was very introverted. I didn’t like people.”

Then, Davis says, “I had a moment where all of it kind of came to a head and I tried to kill myself.”

He was prepared. “I had a knife. I was just going to take myself out through the chest.”

But, he says, “God showed up. I kid you not. And he put this invisible shield in front of my whole body. I couldn’t hurt myself or stab myself or anything.”

And, Davis says, “I couldn’t do it no matter how many times I tried. I did. And it didn’t work.”

He previously experienced dark times during his life. “I already was having these very dark demonic experiences and I didn’t have somebody to really talk those out with. Not just that, I saw demons as a kid and they’d come terrorize me in my sleep. So, when I got to this suicidal moment, I heard the Lord speak for the first time. And he said, ‘Have you forgotten me?’ And he told me to drop the knife and everything would be OK.'

The next day, Davis looked at some statistics. “Forty people die from suicide every minute. So, I’m sitting there and the first thought that comes into my head is, ‘The God of the universe just stopped me from taking myself out. What?’ So, I thought, ‘My life must matter to him and I must have something important I need to get done.’”

His life changed dramatically. “I became an extrovert all of a sudden. A massive personality change. I started thinking more positively. I was able to get some of my heavier emotions out in songs. My relationship with my parents deepened. I was able to talk to them about some things. We grew closer as a family. It was crazy.”

School life changed, too. “I was still kind of the weird kid, but I started making more friends. And some people started apologizing to me. And that was the beginning of healing in my life.”

When he was 19, Davis majored in psychology at Columbia International University. But he realized after a year that he “didn’t have what it took to be a counselor.”

And, he says, “One of the things that the Lord told me at 13 was that I would be writing songs for young people. And that would be my job and my ministry career. And I had not followed that track.”

Davis had a lot of fear about making music a career. “Several people in my life that meant really well were discouraging me from doing music.”

But with the help of God, he took the plunge and delved into music, he says. “I think what I’m doing now is a miracle. I think any musician who is pursuing it full time is a miracle.”

Davis eventually “hit the ground running. I put together an indie Americana record. I wrote a bunch of songs. I ended up putting a band together and we became one big family. Jacob Davis and the Nightingales.”

God also told him to go back to school, Davis says. He chose Visible Music College in  Memphis because it offered a degree in songwriting. “Visible is a beautiful, unique hub, I would say. Even though it’s a modern Christian music college, we opened it up for all denominations. So, you have all these different people that were there. And the music was very diverse.”

Davis graduated from Visible two months ago. “There’s a general thing I took and a specific thing I took. Generally, I learned what it means for a songwriter to love God and love people as well. And to steward our words well. I think music is supposed to be selfless. I think it’s supposed to be an offering of kindness and unity and peace and restitution. And up to that point, songwriting had been cathartic to me. So, I learned how to get out of myself and look at the world and write about that world in a way that’s uplifting.”

Now an instructor at School of Rock, Davis currently is working on various projects.

“Ayr” is his three piece Irish group. “I’ve got a lot of Irish and Scottish in my heritage.”

“Monsters Beware” is another band Davis is working on. It’s “about all of the monsters we deal with internally. And, I would say, demons that we face externally and the strongholds within our minds. Things that are mentally incorrect that hinder us from being able to move forward in life.”